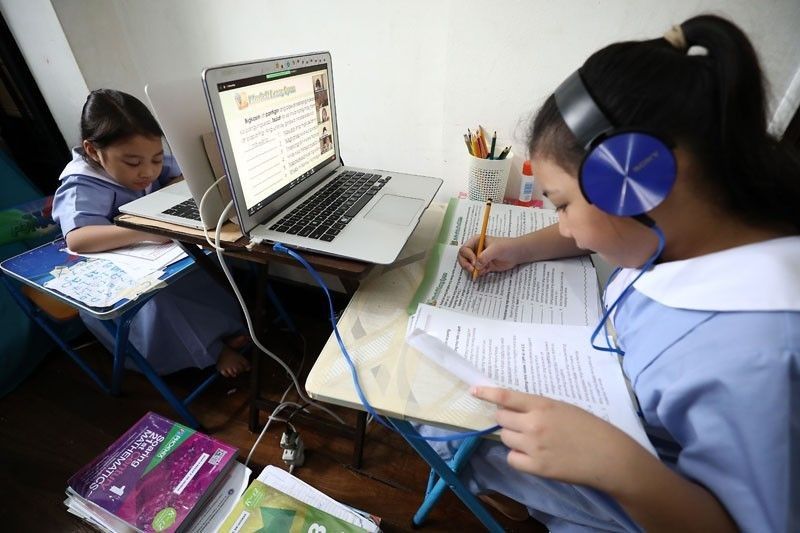 Students in uniform answer their learning modules during an online class under DepEd’s blended learning system this year due to the COVID-19 pandemic.

MANILA, Philippines—Education officials on Monday launched an “error watch” initiative following reports of mistakes in its printed modules and in other learning resources such as in DepEd TV.

A memorandum from Undersecretary for Administration Alain Pascua said the agency seeks to gather reports of errors and forward such to the “appropriate offices for validation and correction.”

The department has drawn flak over errors spotted by social media users in its learning materials, including a solution to a Math equation that has gone viral on the Internet.

Officials have since appealed for understanding as they said even their teacher-broadcasters and production teams are still adjusting from the changes brought by the COVID-19 pandemic.

“This is not the last time there will be errors I assure you, because we are not perfect,” Pascua told reporters on October 9. “We have been here for just four or five months. We are not really journalists or broadcasters in this line of work.”

In the memo, the official added that DepEd’s curriculum and instruction and administration offices are currently finalizing steps to address reports of erroneous materials.

Under the initiative, reports could be seen through e-mail, text and Viber messages, Facebook Messenger and Workchat.

“Dissemination of these details is desired to enable an efficient and proactive system of improving the department’s learning materials across all modalities,” Pascua said.

In a press briefing on Monday, DepEd Undersecretary for Curriculum and Instruction Diosdado San Antonio said they have received 18 instances of errors spotted which have been traced from the agency’s field offices, while some 15 have yet to be identified.

San Antonio added that DepEd is partnering with more experts for quality checks as he admits that the present workforce has been “overstretched.”

Classes for some 24.8 million Filipino students began on October 5 with officials touting a “victory over COVID-19” despite concerns from various groups that many learners will face difficulty for the effort due to internet connection problems, as well as lacking the means for gadgets used in the said learning.

Previous Caps on international flights leave hundreds of Australians stranded in Canada
Next Man, 30, charged with 2nd-degree murder in deaths of boys from Wendake, Que.