Home / Headline / Holding back the waves on the Acadian Peninsula

Holding back the waves on the Acadian Peninsula

Paul-Marcel Paulin has a very precise memory: he can tell you that he bought his house in the village of Sainte-Marie-Saint-Raphaël on July 2, 1966. 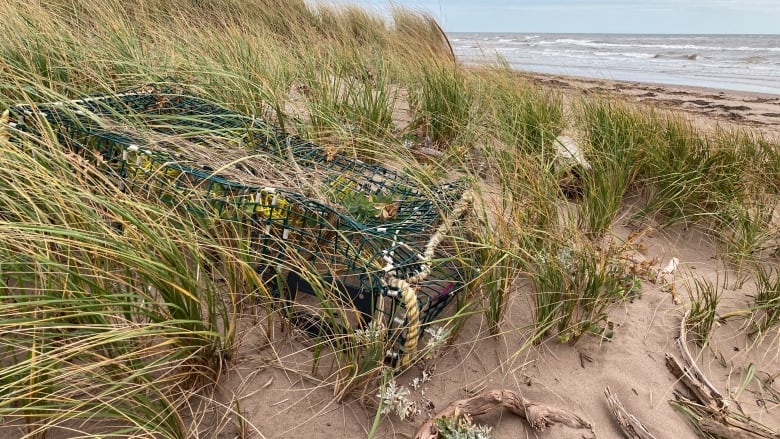 Paul-Marcel Paulin has a very precise memory: he can tell you that he bought his house in the village of Sainte-Marie-Saint-Raphaël on July 2, 1966.

And he will tell you that on Jan. 21, 2000, a raging storm swept in from the Gulf of St. Lawrence and tore away more than 16 metres of his property, bringing the beach below much closer to his house.

That was only the most dramatic example of the slow but steady advance.

In the more than 50 years Paulin has lived here, he says he’s lost about 90 metres of his yard.

“When I bought, I’d lose a little every year, but not like in the last few years,” says the 77-year-old.

“I used to have a big garden out back. Now there’s no space.”

Paulin’s theory: the loss of winter ice cover in the gulf allows the waves to pound the shore harder and harder. “In winter there used to be a lot of ice. Now there’s no ice, so storms in the winter hit really hard.”

“This is a good example of problems of erosion in the Acadian Peninsula,” says Marion Tétégan Simon, the research director at Valorēs, a Shippagan-based science institute.

“It is a very big issue. It is a big issue for this citizens.”

In several communities on the Acadian Peninsula, Valorēs is researching how rising sea levels and coastal erosion are threatening communities.

The peninsula is New Brunswick’s canary in the climate coal mine: jutting out into the gulf, it’s low to the water, fully exposed to the ferocity–and growing frequency–of extreme weather events.

At nearby Bas-Caraquet, Environment Canada measured an increase in average winter temperatures of 3 C between 1985 and 2011. The closest measure of sea level comes from Escuminac, where it rose 10 centimetres from 1973 to 2011.

Even if the world stopped emitting greenhouse gases tomorrow, it would take decades for those trends to slow down and stabilize.

“We cannot change what we did in the past,” Tétégan Simon says.

The Valorēs website features dramatic aerial photographs illustrating how much erosion has ripped away the shorelines of various coastal communities.

There are also videos with projections of once-in-a-century storm surges in the year 2100. They show large parts of several communities underwater, including the street in downtown Shippagan, where the Valorēs office is located. 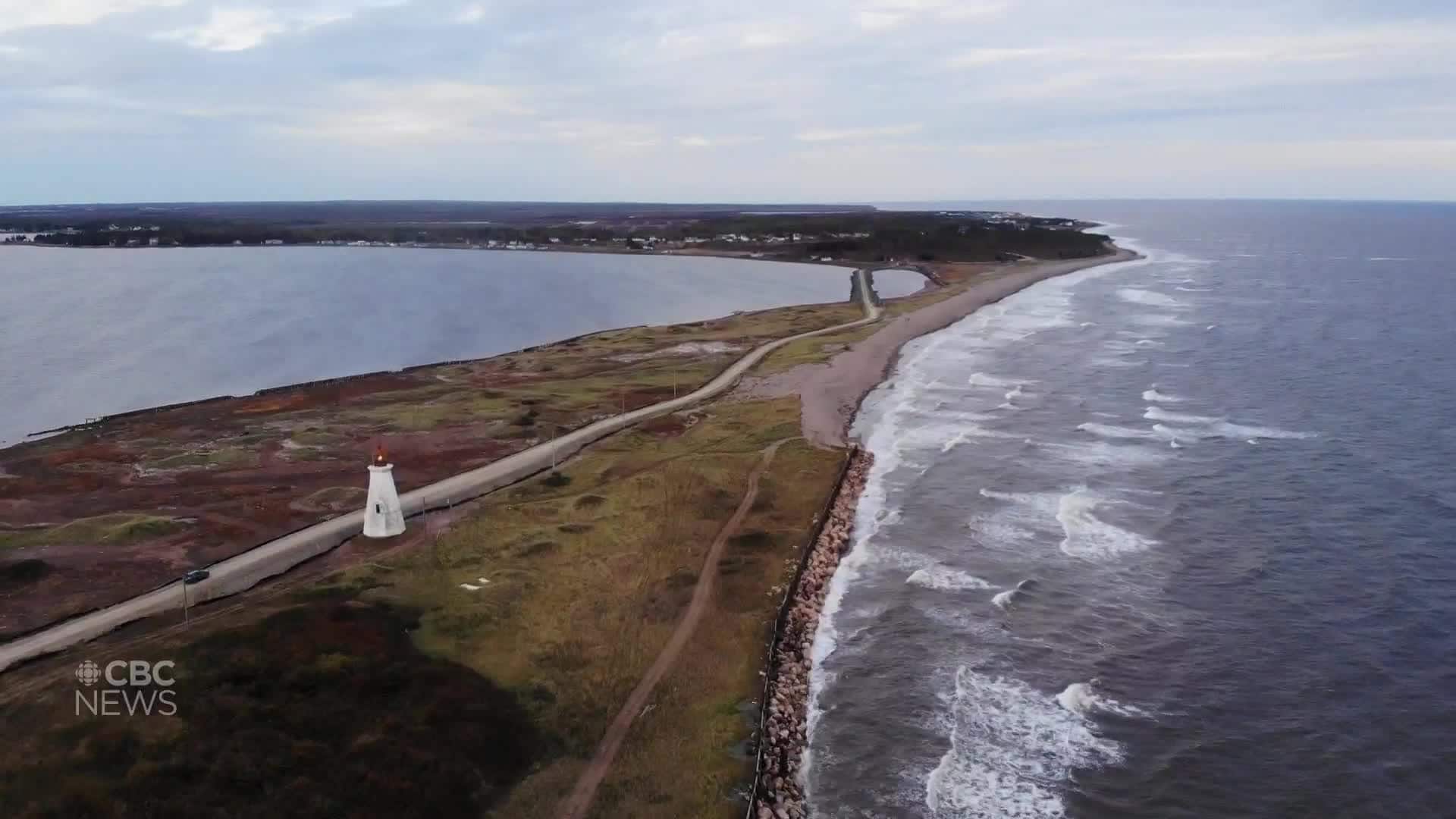 Reinforcing an eroding coastline on the Acadian Peninsula

On the Acadian Peninsula, a team of research scientists is helping local communities fight the impact of climate change, including its eroding coastline.

Paulin has come up with his own home-made solution: dozens of old lobster traps perched on the cliff behind his home to blunt the impact of the waves on the soil.

In nearby Chiasson Office, Steven Cormier and Sylvie Desylva reinforced their shorefront backyard with large rocks, a $30,000 expense.

Desylva maintained a Facebook page of photos showing erosion along the coast and calls the situation “a disaster” that her family has avoided only thanks to those rocks.

“Not everybody can afford it but if you want to stay on the shoreline, you’ve got to invest,” Cormier says.

Tétégan Simon says such DIY efforts can help but even large rocks like the ones behind the Desylva-Cormier household may not last.

“With one strong storm, you can lose all the rocks you put in,” she says.

In another vulnerable area, the village of Le Goulet, Valorēs has been studying other options, including the planting of Ammophila arenaria, a European beachgrass with long roots. The grass helps stabilize the soil. “It is a better solution,” says Tétégan Simon.

Le Goulet’s main road, its municipal office, church and most of its homes and businesses sit below sea level, protected from what the gulf throws at it by a long dune that runs the length of the village.

“Without the dune, the village will be flooded every storm,” says Frédéric Haché, a Valorēs research officer who regularly measures the dune.

It grows and shrinks naturally with seasonal weather patterns, but in recent years it’s been losing more sand than it gains back.

In 2019, Hurricane Dorian “lasted six to eight hours here,” he says. “If it had lasted 24 hours we would have been a lot more nervous.”

Working with Valorēs, the village is considering a bylaw that would restrict new construction in the danger zone. Any homes or businesses could not have basements or would have to be on stilts.

“These requirements are in place to ensure that the restoration efforts will be successful and withstand future weather events, and also to avoid a deleterious change to important coastal habitat,” says spokesperson Vicky Lutes, noting piping plovers, a species at risk, use the dune.

Marc-André Benoit, another Valorēs researcher, grew up around Le Goulet and says he sees a lot of “eco-anxiety” among residents, which makes his work very personal for him.

“You can really feel it in the population around here,” he says, mentioning “their loss of personal terrain, the cost of insurance increases and the [potential] loss of cultural terrain like a park, a church.”

There’s a similar anxiety in parts of Chiasson Office, on the other side of Shippagan. Cormier and Desylva are exposed to the gulf, but another part of the community is insulated from the worst of its weather by another dune leading to an old lighthouse.

Except it’s being pounded by the ocean too. A road that ran along the dune to the lighthouse just five or six years ago is gone. “The sea washed it out,” says Luc Robichaud, the sustainable development coordinator at Valorēs. “And now it’s just a beach.”

Valorēs was created in 2002, a merger of three earlier research institutes devoted to the peat moss, fish and aquaculture industries.

It still pursues research and development in those areas, and in newer sectors in the region such as blueberries, but a growing part of its work is in climate change adaptation and mitigation.

Funding is project-by-project, some from industry, some from municipalities and some from the province, including the Environmental Trust Fund.

“For me, first of all, it’s very important to explain to the population: what are the risks, what is climate change, why do we have climate change and what we can do to reduce the impact at our level?” she says.

“And also, I like the Acadian Peninsula. It’s a very beautiful place and we want to preserve it.”

On Day of Valor, Duterte pays tribute to frontliners as Robredo rallies for unity amid ‘dark times’