How to keep warm on a patio without heating the planet

In this week’s issue of our environment newsletter, we look at low-carbon ways to stay warm outside during the pandemic and hope versus fear in the discourse around climate change.

How to keep warm on a patio without heating the planet

But many of them burn fossil fuels to — essentially — heat the outdoors. The French energy think-tank Negawatt estimates that using five propane heaters to heat a roughly 800-square-foot patio from November to March will emit as much CO2 as a car circling the Earth three times.

With the increase in outdoor heater sales, the impact can add up. In 2006, when British MP Desmond Turner campaigned to have patio heaters banned in his country, he estimated that the one million tonnes of annual emissions from patio heaters in the U.K. cancelled out the emissions reductions made a few years earlier by starting to tax vehicles based on how polluting they were.

There have been numerous calls to ban patio heaters in Europe — and some successful bans. For example, France banned all outdoor heaters (including electric ones) in July, although the ban doesn’t go into effect until 2021.

While patio heaters make up only a small fraction of emissions, those who want them banned argue that they’re wasteful and unnecessary. “What’s at stake is ending ecologically aberrant practices that lead to totally unjustified energy consumption,” French Ecology Minister Barbara Pompili said this summer.

But as people seek ways to socialize during the colder months of a pandemic, is there a greener way to keep everyone warm outside?

Tomas Syskakis, a master’s of applied science student at the University of British Columbia, looked into that question a few years ago. At the time, he was taking a course in which engineering students try to solve problems for local businesses — in his case, Koerner’s pub on campus.

“They wanted to be able to use their patio year-round, but they were also concerned about sustainability,” Syskakis recalled.

Syskakis and his team surveyed other local Vancouver restaurants and bars and compared costs and emissions for different options. They found that most local businesses used portable propane heaters as a “quick and dirty solution,” since they were fast to install, easy to move around and didn’t require any infrastructure, such as plugs or gas lines. The team found natural gas heaters were a little less polluting.

The team ended up recommending electric infrared heaters, which were not just greener but cheaper and easier in the long run, as the costs of new propane tanks and the hassle of changing them added up over time.

“You’re obviously making the better decision for your carbon footprint,” Syskakis said — at least in provinces with a cleaner grid, such as B.C., Manitoba, Ontario or Quebec. His report also flagged the fact that propane and gas heaters emit other pollutants, such as nitrogen oxides. (Safety can also be an issue, since the fuel is explosive.)

In the end, Syskakis said, the pub bought some electric infrared and some natural gas infrared heaters and left part of its patio unheated (though he wasn’t sure if it was because of his report).

His engineering team wasn’t the only one looking at a greener alternative. Some classmates were trying to solve a similar problem for the on-campus Perch restaurant (which closed in 2017). Their solution? Microwaveable cushions that contain a warming gel (like foot and hand warmers), which they found to be more sustainable, cheaper and more comfortable for customers than electric or propane heaters. Heated cushions are already used in some cafés and restaurants in Europe.

In fact, research by the California-based Center for the Built Environment shows that heating the body directly allows people to be comfortable at cooler ambient temperatures and can save energy. Syskakis suggested that heated jackets could also work.

Last week, Emily Chung wrote about the safety and environmental benefits of taking the stairs rather than an escalator.

K. Braun wrote, “Thank you for the article on taking the stairs. In the midrise condo building where I live, I was not in the habit of taking the stairs because they are so ridiculously inconvenient. During the pandemic, however, I’ve been willing to do the extra walking to avoid being trapped in an elevator with people. It’s great to read about a move to ensure stairwells are useful and appealing, unlike in my building, where I need to navigate multiple locked doors, transit through the laundry room (which has limited hours), use two completely separate stairwells and wander up and down hallways.”

Some readers also pointed out that the photo accompanying the story was confusing, as it showed that people were being instructed to walk on the left side going up, rather than on the right. That’s because the photo was taken in Sydney, Australia, where the rules of the road are reversed. We didn’t mean to complicate matters — we’re just always looking for the most eye-catching photos.

Old issues of What on Earth? are right here.

There’s also a radio show! What on Earth airs Sunday at 12:30 p.m., 1 p.m. in Newfoundland, and is available any time on podcast or CBC Listen.

The Big Picture: Solar power now cheaper than any other

Solar power has been with us for many years, but it has had a long way to go in unseating more conventional — and emissions-rich — energy sources such as coal or gas. That’s mainly because of the cost. But according to the International Energy Agency’s latest World Energy Outlook report, power generated through solar panels (also known as solar photovoltaic) has reached an important milestone: in several jurisdictions around the world, it is now cheaper per megawatt hour to build a new solar installation than it is to build a new coal or gas plant. (In India, for example, it could cost as little as $20 US per megawatt hour.) This led the IEA to declare that in sun-rich areas with low-cost financing, “solar PV is now the cheapest source of electricity in history.” The graphic below shows the price ranges for coal and gas plants and solar power in different jurisdictions. Not only does this news vindicate renewable-energy advocates, but given the prestige of IEA’s data, this new information is also likely to influence decisions around the world as countries seek to transition to low carbon power. 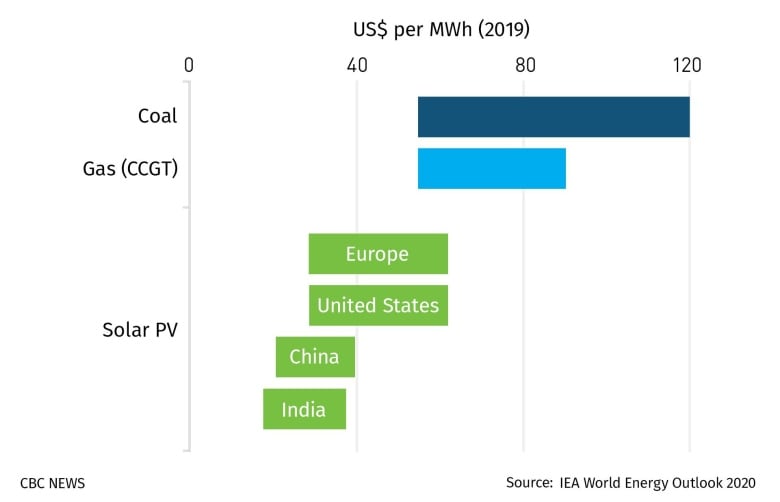 Hot and bothered: Provocative ideas from around the web

Hope vs. fear in the language of climate change

Not seeing or hearing the promises or calls to action she wanted, Lim, now 19, began an attention-grabbing campaign called No Children, No Future, in which she vowed not to have kids until and unless she saw progress on fighting climate change.

“I’ve always wanted to be a mom,” the McGill University student told Laura Lynch, host of CBC Radio’s What on Earth. “So the idea of living a life without children is … really depressing, to be honest. But then I guess also if I were to have children, I wouldn’t want to expose them to what I think the future might hold.”

While her pledge may be exceptional, Lim isn’t alone in her frustration. Experts who study communications and climate say the language we use to talk about the environment — especially in terms of hope and fear — could play an important role in motivating people to listen and act.

Emotion is key to how people receive and act on messages, according to Robin Nabi, a professor who specializes in health communication and persuasion at the University of California, Santa Barbara.

Nabi conducted a study of students in which she employed messages about climate change and its consequences. Each message had the same content, but one was framed negatively (for example, if you don’t stop driving a car and ride a bike instead, there will be trouble) and the other was positive (riding your bike instead of driving will help fight climate change).

Nabi said the result was striking. The positive message was more likely to lead people to take action.

Fear, said Nabi, can be critical in getting attention, but if it becomes overwhelming, the listener may dismiss or deny the message as a way of protecting themselves from the threat.

Frank Luntz, a pollster and adviser for the Republican Party in the U.S., considers himself a master of the message. Two decades ago, he wrote a memo advising politicians to stop using the phrase “global warming” in favour of the less scary-sounding “climate change.”

“‘While global warming has catastrophic communications attached to it, climate change sounds like a more controllable and less emotional challenge,” he wrote.

In the years since, however, Luntz had an epiphany prompted by an evacuation from his home in California as a wildfire raced toward it. The house survived, but Luntz’s view of climate change did not.

“I’m here before you to say that I was wrong in 2001,” Luntz told a panel of U.S. senators in Washington last year. Now, he is offering his help to develop messages that will motivate people to take action on climate change.

For example, Luntz believes politicians and activists should tell people that there are new careers awaiting them when climate change shuts down fossil-fuel-dependent businesses, because “careers” connotes something far more meaningful than the word “jobs.”

Instead of issuing threats about the future, Luntz advises something else.

“A threat or a problem is negative,” Luntz told the senators. “A consequence is something that personalizes this issue…. If you talk about the consequences of climate change, people will pay far more attention to you than if we refer to it as a climate crisis.”

That idea is in line with a point made by Nabi — that people are much more responsive when they believe they have a direct, personal connection to what they are being told.

“Fear and hope are very closely related, in that fear and hope are both about uncertainty. But the value of hope is that it inspires us, and when we’re inspired, we’re more likely to take action.”

Are there issues you’d like us to cover? Questions you want answered? Do you just want to share a kind word? We’d love to hear from you. Email us at whatonearth@cbc.ca.

Sign up hereto get What on Earth? in your inbox every Thursday.

‘Hey, crap, this bird is alive!’ Driver describes how bald eagle came back to life in back seat of his van

How to have a waste-free Halloween

Trio returns to Earth after 6 months aboard International Space Station

Tim Hortons to stop using two cups for hot drinks, use sleeves instead

Business Tim Hortons is ending the practice of double cupping hot drinks, a move the …