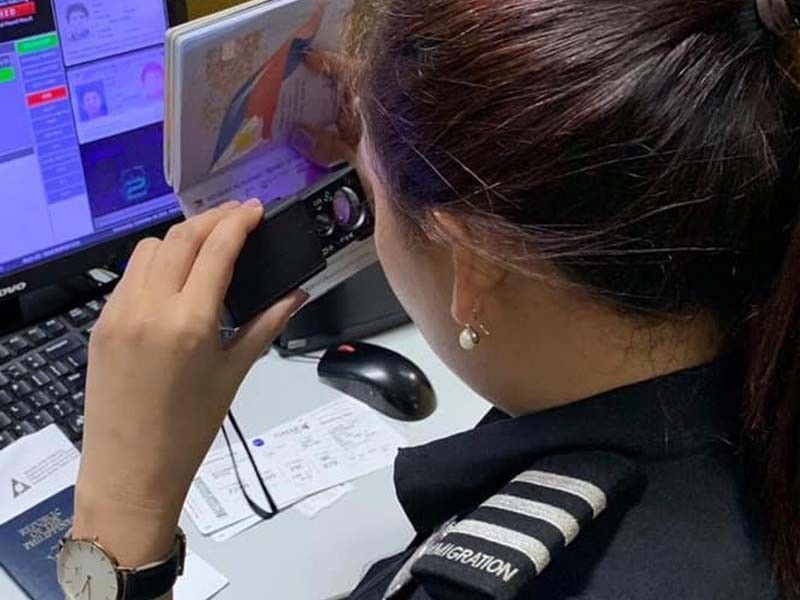 In this photo from the Bureau of Immigration Facebook page, an Immigration officer inspects a traveler’s passport.

MANILA, Philippines — The government’s pandemic task force has ordered a technical working group to study the travel ban on foreigners as some Filipinos are urging the administration to allow their foreign partners to enter the Philippines.

The Philippines is enforcing entry restrictions on people traveling from COVID-19-affected countries as it tries to prevent the further spread of the virus, which has infected more than 319,000 people in the country. Filipino citizens and their foreign spouses and children and holders of government-issued diplomatic visas and permanent resident visas are not covered by the ban.

There have been calls for the government to exempt foreigners who have Filipino partners, especially those whose weddings have been delayed because of pandemic-related restrictions.

Inter-Agency Task Force on the Management of Emerging Infectious Diseases (IATF) Vice Chairman Karlo Nograles, who is also Cabinet secretary, said government officials have received letters from Filipinos who are calling for the easing of the travel ban.

“With regard to your concern, that is being discussed by the (IATF) and we have a technical working group (TWG) that is studying your concern,” Nograles said during an online live session last Saturday.

“That has been brought up to the IATF and we have delegated that to a TWG. We’re just waiting for the recommendations of the technical working group. Like I said, on a case-to-case basis, if it’s for humanitarian reasons, we allow it,” he added.

Last July, Foreign Affairs Secretary Teodoro Locsin Jr. ordered the agency’s legal office to find ways for fiancés of Filipinos to enter the Philippines. The legal office has been directed to “find all ways to get around the ban” so the couples can get married.

With regard to the reopening of tourism to foreigners, Nograles said the easing of protocols should be done gradually. He noted that Boracay and Baguio are now open for domestic tourism.

“We are slowly resuming domestic tourism. We need to emphasize that it should be done gradually because LGUs (local government units) have to be prepared,” Nograles said.

Nograles said LGUs that are now open to tourists should have testing and other health procedures to prevent a surge of COVID-19 infections.

2020-10-03
AtinitoAdmin
Share
Previous A further 12,872 lab-confirmed cases of coronavirus in the UK – figures
Next Myanmar volunteers under strain as coronavirus toll grows