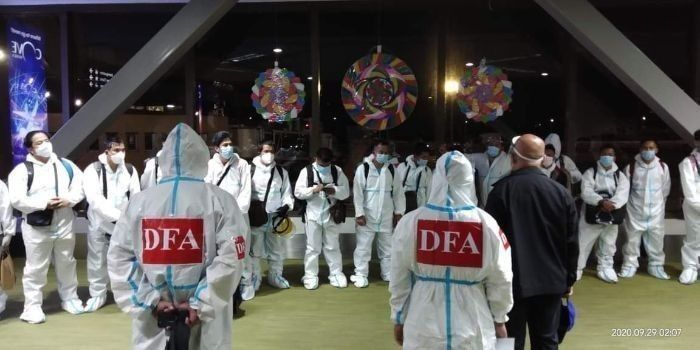 In this Sept. 29, 2020, photo, the officials from the Department of Foreign Affairs welcome home 16 stranded Filipino seafarers and three land-based overseas Filipino workers (OFWs) from China.

The department in a bulletin said today's additional infections came from the Americas and Asia Pacific region, along with nine more deaths to bring the fatality count to 845.

Recoveries have stayed at 7,497 with no new patients discharged, with some 3,334 still receiving treatment.

In total, 117 Filipinos overseas were added to the DFA's count this week, with the highest reported on November 27 at 73 new infections.

DFA had sought to explain that the high number of new cases were a result of late reports due to privacy concerns in one European country.

Americas in its 10 countries now account for 839 cases, 520 recoveries and 188 deaths — the second highest in the fatality count.

Globally, there are now 62.2 million individuals infected with the coronavirus, with deaths reaching 1.45 million by end-November.

The US has surpassed the 13th million mark with now 13.2 million Americans sick, along with over 266,000 dead.

India, Brazil, France and Russia follow in the top five, with the Philippines nearly 430,000 infections placing it at the 27th spot.

It remains to be the second highest country reporting COVID-19 cases in Southeast Asia, next to Indonesia, with over 534,000. — Christian Deiparine

Duterte: Families of security forces will also be prioritized in gov’t vaccination program

Coronavirus cases in the Philippines climb to 511,679 with 1,797 new infections

Swine, fish production in Ilocos Norte to get a boost

UP closes academic oval up to February 4

In a webinar yesterday, Agriculture Secretary William Dar said the DA is working on stabilizing …