China blasts off on mission to collect moon rocks

China launched an ambitious mission on Tuesday to bring back rocks and debris from the moon’s surface for the first time in more than 40 years — an undertaking that could boost human understanding of the moon and of the solar system more generally. 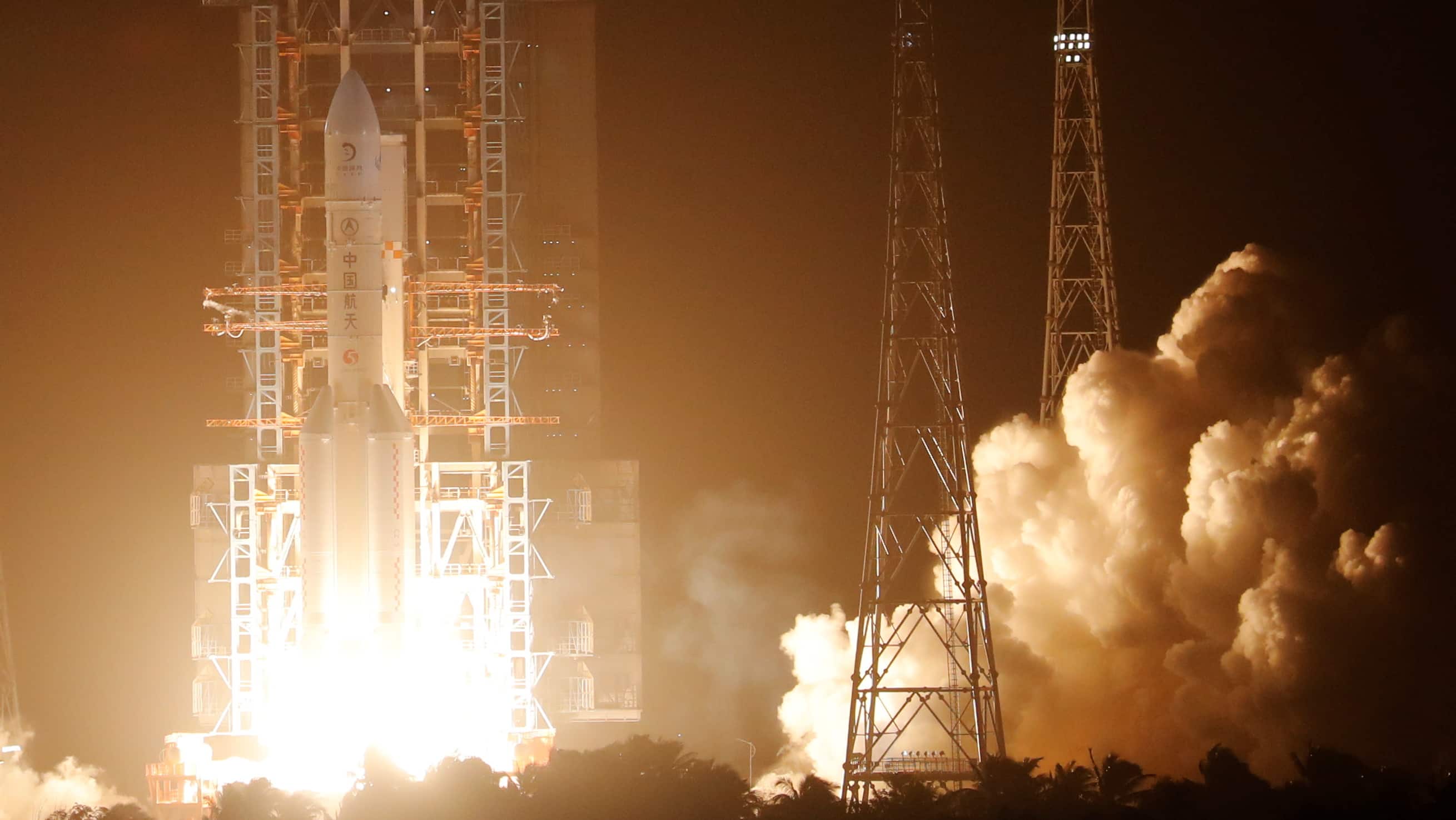 China’s Chang’e 5 spacecraft’s main task is to dig into the moon and scoop up two kilograms of rock and debris, before returning to Earth.

China launched an ambitious mission on Tuesday to bring back rocks and debris from the moon’s surface for the first time in more than 40 years — an undertaking that could boost human understanding of the moon and of the solar system more generally.

Chang’e 5 — named for the Chinese moon goddess — is the country’s boldest lunar mission yet. If successful, it would be a major advance for China’s space program, and some experts say it could pave the way for bringing samples back from Mars or even a crewed lunar mission.

The four modules of the Chang’e 5 spacecraft blasted off at just after 4:30 a.m. Tuesday (3:30 p.m. ET Monday) atop a massive Long March-5Y rocket from the Wenchang launch centre along the coast of the southern island province of Hainan.

Minutes after liftoff, the spacecraft separated from the rocket’s first and second stages and slipped into Earth-moon transfer orbit. About an hour later, Chang’e 5 opened its solar panels to provide its independent power source.

The launch was carried live by national broadcaster CCTV which then switched to computer animation to show its progress into outer space.

The mission’s key task is to drill 2 metres beneath the moon’s surface and scoop up about 2 kilograms of rocks and other debris to be brought back to Earth, according to NASA. That would offer the first opportunity for scientists to study newly obtained lunar material since the American and Russian missions of the 1960s and 1970s.

With Chang’e 5, China has launched an effort to join the U.S. &amp; the former Soviet Union in obtaining lunar samples. We hope China shares its data with the global scientific community to enhance our understanding of the Moon like our Apollo missions did &amp; the Artemis program will. <a href=”https://t.co/mPjG4FE0qQ”>pic.twitter.com/mPjG4FE0qQ</a>

The Chang’e 5 lander’s time on the moon is scheduled to be short and sweet. It can only stay one lunar daytime, or about 14 Earth days, because it lacks the radioisotope heating units to withstand the moon’s freezing nights.

The lander will dig for materials with its drill and robotic arm and transfer them to what’s called an ascender, which will lift off from the moon and dock with the service capsule. The materials will then be moved to the return capsule to be hauled back to Earth.

The technical complexity of Chang’e 5, with its four components, makes it “remarkable in many ways,” said Joan Johnson-Freese, a space expert at the U.S. Naval War College.

“China is showing itself capable of developing and successfully carrying out sustained high-tech programs, important for regional influence and potentially global partnerships,” she said.

In particular, the ability to collect samples from space is growing in value, said Jonathan McDowell, an astronomer at the Harvard-Smithsonian Center for Astrophysics. Other countries planning to retrieve material from asteroids or even Mars may look to China’s experience, he said.

While the mission is “indeed challenging,” McDowell said China has already landed twice on the moon with its Chang’e 3 and Chang’e 4 missions, and showed with a 2014 Chang’e 5 test mission that it can navigate back to Earth, re-enter and land a capsule. All that’s left is to show it can collect samples and take off again from the moon.

“As a result of this, I’m pretty optimistic that China can pull this off,” he said.

The mission is among China’s boldest since it first put a man in space in 2003, becoming only the third nation to do so after the U.S. and Russia.

Oh! Cheeky shot of the return capsule <a href=”https://t.co/pymZvYTltG”>pic.twitter.com/pymZvYTltG</a>

“Scientific needs and technical and economic conditions” would determine whether China decides to send a crewed mission to the moon, said Pei, whose comments were embargoed until after the launch. “I think future exploration activities on the moon are most likely to be carried out in a human-machine combination.”

While many of China’s crewed spaceflight achievements, including building an experimental space station and conducting a spacewalk, reproduce those of other countries from years past, the CNSA is now moving into new territory.

Chang’e 4 — which made the first soft landing on the moon’s relatively unexplored far side almost two years ago — is currently collecting full measurements of radiation exposure from the lunar surface, information vital for any country that plans to send astronauts to the moon.

China in July became one of three countries to have launched a mission to Mars, in China’s case an orbiter and a rover that will search for signs of water on the Red Planet. The CNSA says the spacecraft Tianwen 1 is on course to arrive at Mars around February.

China has increasingly engaged with foreign countries on missions, and the European Space Agency will be providing important ground station information for Chang’e 5.

China’s space program has progressed cautiously, with relatively few setbacks in recent years. The rocket being used for the current launch failed on a previous launch attempt, but has since performed without a glitch, including launching Chang’e 4.

“China works very incrementally, developing building blocks for long-term use for a variety of missions,” Freese-Johnson said. China’s one-party authoritarian system also allows for “prolonged political will that is often difficult in democracies,” she said.

While the U.S. has followed China’s successes closely, it’s unlikely to expand cooperation with China in space amid political suspicions, a sharpening military rivalry and accusations of Chinese theft of technology, experts say.

“A change in U.S. policy regarding space cooperation is unlikely to get much government attention in the near future,” Johnson-Freese said.

Archeologist digs into the history behind old N.S. houses, one shoe at a time

WHO team arrives in Wuhan, China to investigate coronavirus origins

Republicans ride the Trump train, down to the democracy-rattling end