Breaking News
Home / Around Canada / Coronavirus: What’s happening in Canada and around the world Wednesday

Coronavirus: What’s happening in Canada and around the world Wednesday

A B.C. health authority facing an uptick in COVID-19 cases — including a recent dance studio outbreak now linked to 36 cases — will soon have more testing capacity. 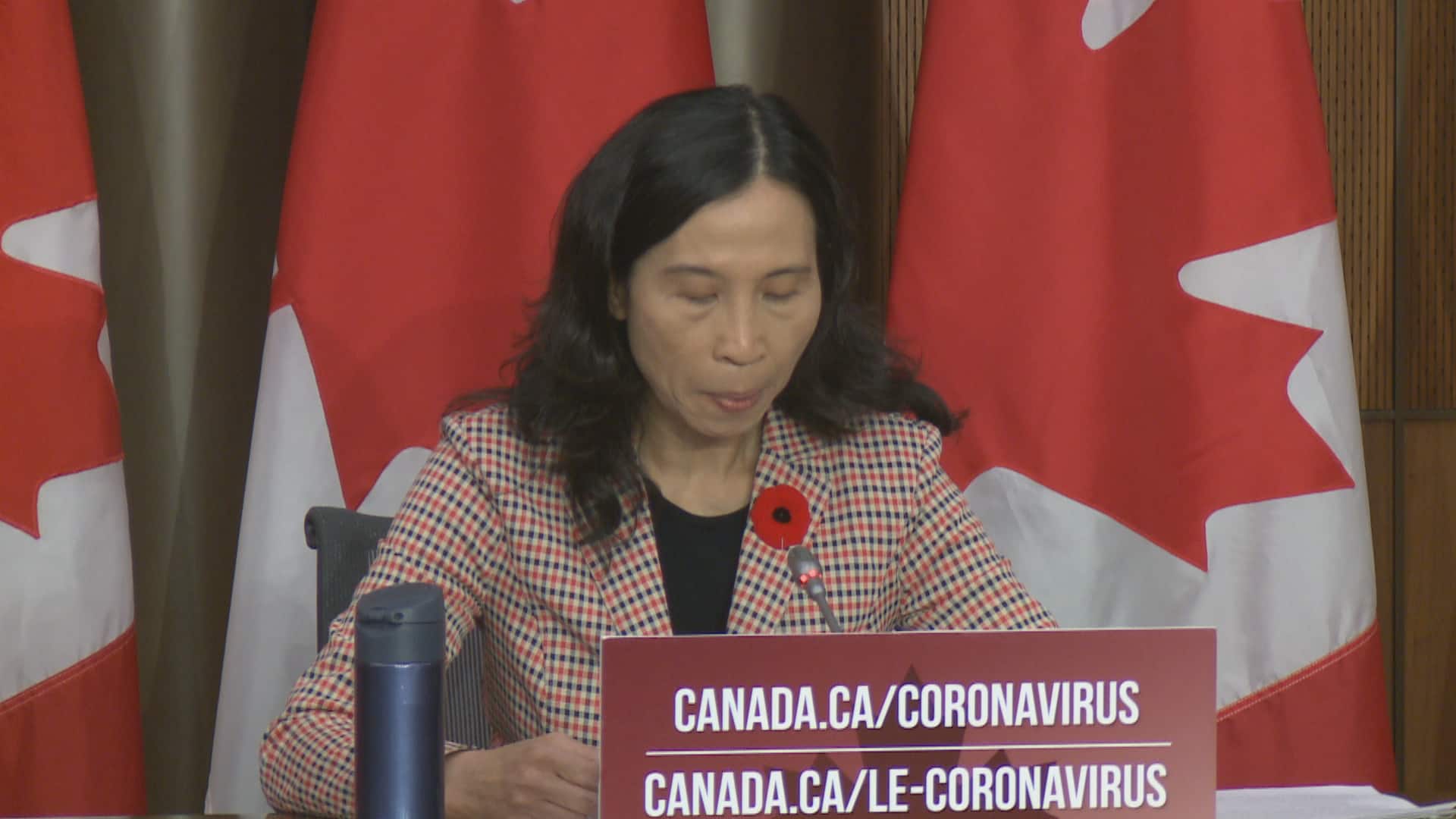 A B.C. health authority facing an uptick in COVID-19 cases — including a recent dance studio outbreak now linked to 36 cases — will soon have more testing capacity.

Fraser Health announced on Tuesday that another COVID-19 test collection centre is slated to open in North Surrey next week. The health authority, which covers a broad swath east of Vancouver including communities like Burnaby and Surrey, accounts for 9,234 of the 15,800 COVID-19 cases reported in B.C. since the beginning of the pandemic.

Faced with rising case numbers, B.C’s health minister and a top public health official on Tuesday reminded people in the province to keep gatherings small, saying “much of the recent transmission” in the province has been connected to get-togethers.

“This is particularly important in the Fraser Health region where public health teams are asking everyone to avoid all social gatherings in your home right now — even those that are within the restrictions of the provincial health officer order,” a statement from Health Minister Adrian Dix and Deputy Provincial Health Officer Dr. Reka Gustafson said.

Alberta is also seeing an uptick of cases, with the top doctor cautioning that the province is “at a critical juncture in this pandemic.”

Dr. Deena Hinshaw urged people not to give up on the fight against COVID-19, saying Tuesday that “we need to reduce the rate of transmission if we want to avoid more difficult choices in the future.”

The province on Tuesday reported more than 6,100 active COVID-19 cases, with more than 2,500 cases each in Edmonton and Calgary.

As of 10:20 a.m. ET on Wednesday, provinces and territories in Canada had reported a cumulative total of 245,922 confirmed or presumptive coronavirus cases. Provinces and territories listed 204,454 as recovered or resolved. A CBC News tally of deaths based on provincial reports, regional health information and CBC’s reporting stood at 10,295.

Health officials in Saskatchewan are introducing a new measure requiring masks in public indoor spaces in Saskatoon, Regina and Prince Albert. The measure, which will be in place for 28 days before being reviewed, takes effect Friday.

The province, which on Tuesday reported 81 new cases (and has averaged 76 new cases a day over the last week) is also decreasing the number of people allowed at indoor gatherings.

In Manitoba, the Red Cross has been asked to provide staff to help care for residents at some long-term care homes dealing with COVID-19 outbreaks.

Ontario is moving to a colour-coded system to communicate what regions are under what restrictions, saying the new system will be an “early warning system” and allow the province to scale public health measures based on what’s happening in a given region.

“As a province, and as a country, we’re grappling with a new reality. And it’s becoming more and more clear COVID-19 will be with us for a while,” Premier Doug Ford said Tuesday, adding that the province is planning for “the long game.”

The move was announced as the province set a new single-day record, reporting 1,050 new COVID-19 cases. The seven-day average of new cases ticked up to 950. The information released on Tuesday put hospitalizations at 357, with 73 in intensive care.

But some public health and infectious disease experts had reservations about the plan, which will move a region from “orange” to “red” only if the local test positivity rate surpasses 9.9 per cent. You can get the full details of the newly released framework here, including details around test positivity rate, outbreaks and health-system capacity.

One thing worth noting is high test positivity rate needed for most stringent measures (before full lockdown). Note the red category: Threshold is a percent positivity of &gt;10% <br><br>For context, some hard-hit Toronto neighbourhoods have hit that threshold, but city as a whole is &lt;5% <a href=”https://t.co/tQPlgfzgvf”>pic.twitter.com/tQPlgfzgvf</a>

Quebec reported an eight-day low of 871 new COVID-19 infections and 34 more deaths attributed to the novel coronavirus, including five recorded in the 24 hours prior. The Tuesday figures put the number of people in hospital in the province at 526, with 85 receiving intensive care.

In Atlantic Canada, Nova Scotia reported one new COVID-19 case on Tuesday. Chief Medical Officer of Health Dr. Robert Strang said several cases are being investigated by public health but noted there’s “nothing at this time that points to general community spread here in Nova Scotia.”

There were no new cases reported in New Brunswick, Prince Edward Island, or Newfoundland and Labrador, which has now gone eight days straight without any new cases.

Across the North, there were no new cases reported in Yukon, the Northwest Territories or Nunavut.

In the Americas, eyes were on the United States, where a contentious election fight between President Donald Trump and former vice-president Joe Biden had not yet resulted in a clear victor. The country, which has seen more reported COVID-19 cases than any nation in the world, is seeing a surge in cases in several states.

The president’s response to the global pandemic was a major issue in the campaign, with measures like lockdowns, mandated business closures and mask requirements proving to be deeply divisive in many parts of the U.S.

The World Health Organization says there has been a “further acceleration” in the speed of COVID-19’s spread in Europe, which was responsible for about half of the globe’s new cases reported last week.

The Swiss government on Wednesday authorized deploying up to 2,500 military personnel to help the country’s hard-pressed health-care system handle a second wave of coronavirus infections.

This marked the second time this year the army has rolled out to support hospitals as they treat and transport patients New infections surpassed 10,000 in a day on Wednesday, threatening to overwhelm the health-care system.

The country’s health ministry said almost 24,700 new cases were registered, up from previous record of almost 22,000 last week, figures that the ministry had earlier said would mean “worse than the worst scenario.” Over 370 people died in the past 24 hours.

The ministry noted a spike in cases in big cities, including in Warsaw, the capital, where massive anti-government protests have been held daily for almost two weeks against the tightening of the abortion law, already one of Europe’s strictest. The government is expected to announce new restrictions later Wednesday.

Russian officials on Wednesday reported 19,768 new coronavirus infections and 389 new deaths, both the highest since the beginning of the pandemic.

The Baltic nations of Estonia and Latvia say they have both registered a record daily number of COVID-19 infections since the start of the outbreak.

South Africa remained the hardest-hit nation in Africa on Wednesday, with more than 728,000 reported cases of COVID-19 and more than 19,500 deaths.

Algeria’s secretive presidency has confirmed that the mysterious illness that caused President Abdelmadjid Tebboune to be hospitalized in Germany last month was the coronavirus.

However, previous to his hospitalization, several senior officials in the president’s entourage had developed COVID-19 symptoms and Tebboune had been placed in what the government called “voluntary preventive confinement.”

As the pandemic has pushed many companies to allow telecommuting, it has also caused a population outflow from Tokyo — the first time that has happened in years, the latest government data showed.

India’s capital reported a record 6,725 new coronavirus cases in the past 24 hours, hit by its worst wave of infections since March.

With files from The Associated Press, Reuters and The Canadian Press