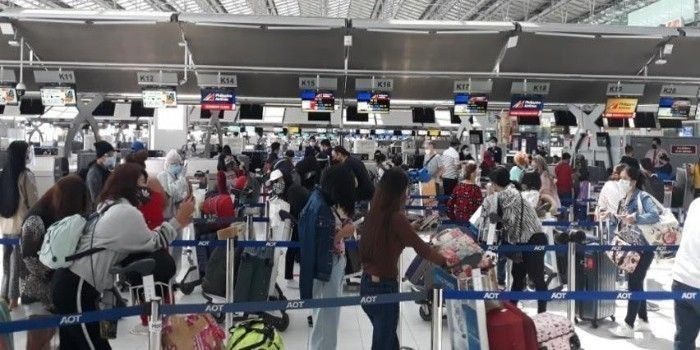 In this August 29, 2020, photo, 129 Filipinos are assisted by Philippine Embassy in Bangkok officials at Suvarnabhumi Airport as they checked in for their flight home.

MANILA, Philippines — Foreign affairs officials on Tuesday reported seven more Filipinos abroad with the coronavirus, as the global count of infections near 60 million.

A daily bulletin by the DFA said the new cases came from Asia Pacific and the Europe, to push the total to now at 11,567.

The number of fatalities has remained at 834 with no new deaths tallied on November 24.

Some nine more Filipino patients have recovered as well, bringing the count to 7,487, while 3,246 remain receiving treatment.

The Middle East remains with the most number of infections at 7,530 along with 549 deaths and some 4,652 recoveries.

Asia has the second highest with 1,894 cases, 1,322 recoveries and keeping its deaths at nine. Europe follows with 1,313 Filipino patients, 97 deaths and 993 recoveries.

The Americas have the least number of infections at 830, but it continues to hold the second highest deaths at 179, while it recoveries are at 520.

Over the weekend, the labor department reported that nearly 320,000 overseas Filipino workers have been repatriated as a result of the lockdowns abroad to curb the spread of the deadly virus, but an official has said that the number could grow to as much as 700,000.

Across the world, the COVID-19 has infected over 59.3 million individuals to date, and it has taken the lives of nearly 1.4 million.

The United States leads in both cases at 12.4 million virus patients and 257,000 deaths.

America is followed by India, Brazil, France and Russia among the nations with the highest infections, while the Philippines with its more than 421,000 patients is at the 28th spot. — Christian Deiparine