Hong Kong’s pro-democracy lawmakers said Wednesday that they were resigning en masse following a move by the semi-autonomous Chinese region’s government to disqualify four of their fellow pro-democracy legislators.

The 15 lawmakers announced the move in a news conference Wednesday, hours after the Hong Kong government said it was disqualifying the four legislators — Alvin Yeung, Dennis Kwok, Kwok Ka-ki and Kenneth Leung.

The disqualifications came after China’s National People’s Congress Standing Committee, which held meetings on Tuesday and Wednesday, passed a resolution stating that those who support Hong Kong’s independence or refuse to acknowledge China’s sovereignty over the region, or threaten national security or ask external forces to interfere in the city’s affairs, should be disqualified.

“Today we will resign from our positions, because our partners, our colleagues have been disqualified by the central government’s ruthless move,” Wu Chi-wai, convener of the pro-democracy camp, said at the news conference.

“Although we are facing a lot of difficulties in the coming future for the fight of democracy, we will never, ever give up,” he said.

“This is an actual act by Beijing … to sound the death knell of Hong Kong’s democracy fight, because they would think that from now on anyone they found to be politically incorrect or unpatriotic or are simply not likable to look at, they could just oust you using any means,” said pro-democracy lawmaker Claudia Mo.

Beijing has in recent months moved to clamp down on opposition voices in Hong Kong with the imposition of a national security law, after months of anti-government protests last year rocked the city.

“In terms of legality and constitutionality, obviously from our point of view this is clearly in breach of the Basic Law and our rights to participate in public affairs, and a failure to observe due process,” said Kwok, one of the disqualified lawmakers, referring to Hong Kong’s mini-constitution.

Canada’s foreign affairs minister called the decision to remove the four legislators “a further assault on Hong Kong’s high degree of freedoms” that it holds under the Sino-British Joint Declaration under which Hong Kong was returned to China. 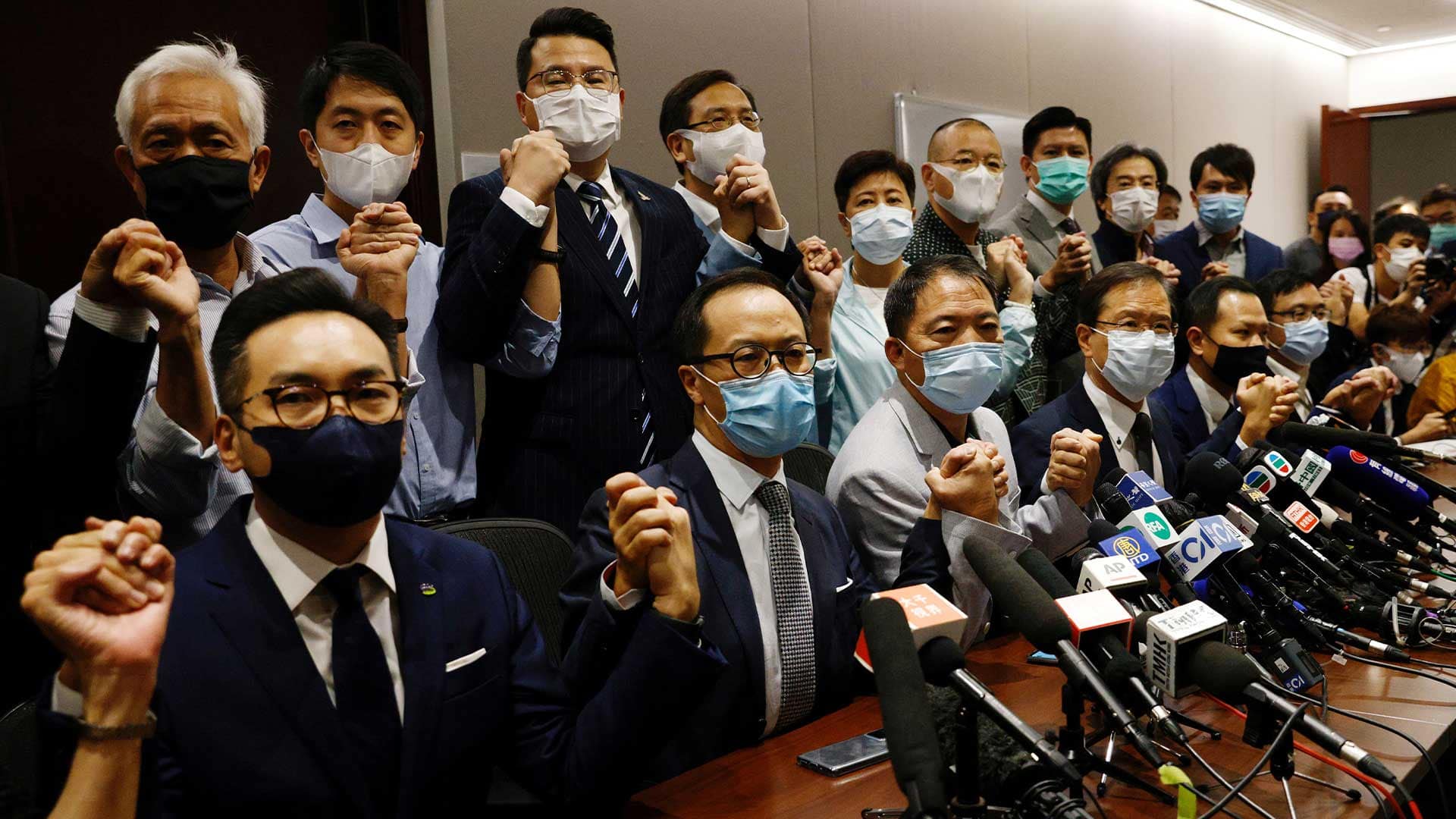 As China imposed new loyalty rules on Hong Kong’s legislature to silence opposition, four members were purged, while 15 others quit in protest.

“This decision further narrows Hong Kong’s autonomy and the space for freedom of expression and public participation in governance in Hong Kong,” said François-Philippe Champagne, in a statement to CBC News, adding that Canada will continue to stand with the people of Hong Kong.

Hong Kong’s leader, Carrie Lam, said in a news conference Wednesday that lawmakers must act properly, and that the city needs a legislature composed of patriots.

A mass resignation by the pro-democracy camp would leave Hong Kong’s legislature with only pro-Beijing lawmakers. The pro-Beijing camp already makes up a majority of the city’s legislature, but the resignations could allow lawmakers to pass bills favoured by Beijing without opposition.

Still, Lam said that the legislature would not become a rubber-stamp body, and that diverse opinion is welcomed.

“I clearly will say that it is unfair to the pro-establishment members that once the 19 members left the Legislative Council, then they will become a rubber stamp of the Hong Kong SAR government,” she said. “That certainly would not happen.”

Earlier in the year, the four now-disqualified pro-democracy lawmakers were barred from running for legislative elections originally scheduled for September, prior to the government stating that it would postpone the elections by a year due to the coronavirus. They were disqualified over their calls for foreign governments to impose sanctions on Hong Kong and Beijing.

The four lawmakers later remained in their posts following the postponement of the elections.

The postponement was criticized by the pro-democracy camp as an attempt to block them from taking a majority of seats in the legislature, after they had held an unofficial pro-democracy primary participated in by over 600,000 voters to decide which candidates to field.

Chinese foreign ministry spokesperson Wang Wenbin said that the move to disqualify the lawmakers was necessary to maintain rule of law and constitutional order in Hong Kong.

“We firmly support the [Hong Kong] government in performing its duties in accordance with the Standing Committee’s decision,” Wang said at a regular news conference.

Beijing’s imposition of the national security law on Hong Kong in June and the ensuing crackdown on opposition voices have brought condemnation from Western democracies. Several countries have suspended their extradition treaties with Hong Kong, and Washington has barred Lam and other leading figures from visiting the U.S. and ordered a block on any U.S. assets in their possession.

Beijing has rejected all such criticism and lashed out at what it calls gross foreign interference in Chinese politics.

“I want to emphasize that Hong Kong is a special administrative region of China,” Wang said, reiterating Beijing’s position. “The issue of qualification of Hong Kong Legislative Council members is purely China’s internal affairs. No countries have the right to make irresponsible remarks or intervene.”

We are back to square one in the fight against the novel oronavirus. After claiming …