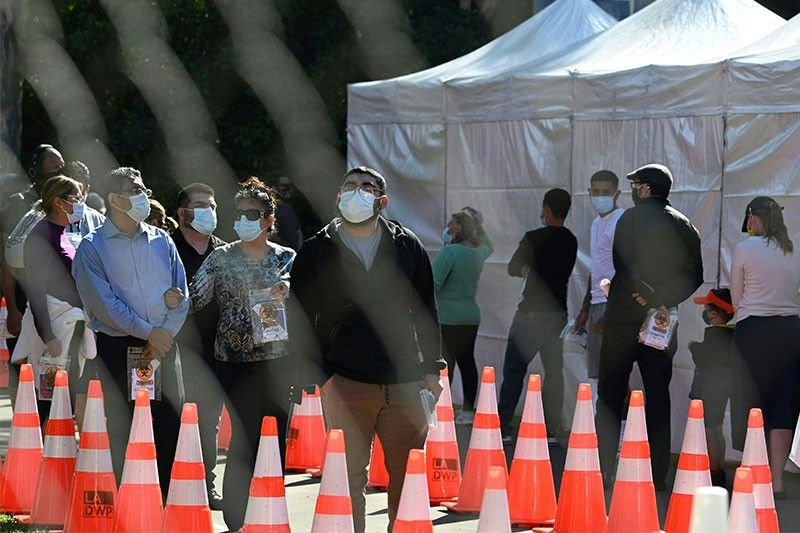 People wait in long lines for coronavius tests at a walk-up Covid-19 testing site, November 24, 2020, in San Fernando, California, just northeast of the city of Los Angeles. California shattered the state’s single-day COVID-19 record with over 20,500 new cases recorded on November 23 ahead of the Thanksgiving holiday.

LOS ANGELES, United States — A restaurant dining ban in Los Angeles was due to come into force Wednesday as officials warned Americans to stay home for the Thanksgiving holiday, while parts of Europe eyed looser coronavirus lockdowns over the festive season.

“It’s as important to say ‘no’ even when it comes to the closest people in our family,” doctor Mark Ghaly said, adding he had barred his mother from a planned celebration.

The US government’s health protection agency has, for the first time, called on Americans not to travel for an annual holiday which usually sees families get together over turkey, yams and cranberry sauce.

With the US confronted by soaring numbers of deaths and new cases, plans to deliver a vaccine to Americans are accelerating.

More than six million doses of the Pfizer-BioNTech COVID-19 vaccine will be available in the first week after it is cleared for emergency use — which is likely next month — and 40 million by the end of December, according to officials.

As America grappled with its crisis, some European nations were slowly relaxing measures ahead of their own Christmas holidays, as a second wave of infections slowed following weeks of lockdowns.

“We must learn from the summer and not repeat the same mistakes, relaxing too fast,” she said Wednesday.

In a televised address, French President Emmanuel Macron announced shops could re-open from Saturday, and nationwide stay-at-home orders would be lifted from December 15.

British authorities also announced restrictions on social mixing and said travel would be eased across the UK over Christmas.

Elsewhere in Europe, 16 German states agreed to slightly loosen limits on social contact over Christmas, according to a draft deal seen by AFP, even as cases near one million there.

State leaders agreed to cap gatherings to 10 people over the December 23 to January 1 holiday — double the limit for the rest of December.

Singapore, which has one of the world’s lowest virus death rates, announced it had no live clusters of COVID-19 cases in the country — the first time since its outbreak began earlier this year.

The encouraging signs in Asia have been tempered by a second wave in Pakistan, where intensive care units were nearing capacity and hospitals forced to turn away suspected COVID-19 patients.

“The coming two weeks are critical and our situation is going to worsen,” said Qaisar Sajjad, secretary-general of the Pakistan Medical Association.

Parts of Japan have also been hit by a recent spike in cases, with experts saying a government travel subsidy campaign to help domestic tourism had contributed to the rise.

Tokyo residents were urged by the governor Wednesday to avoid non-essential outings and businesses serving alcohol asked to shut early.

There are now several possible vaccines internationally being trialled, with candidates from Moderna, AstraZeneca/Oxford University and Pfizer-BioNTech leading the pack.

Britain, France, Austria and Spain have pledged to begin vaccinations in early 2021 at the latest.

Even once a vaccine becomes available, however, any return to normality for a global economy ravaged by the pandemic seems a long way off.

Still, optimism sparked by the vaccines has given a boost to virus-weary citizens across the globe in recent days, as well as pushing up stock markets.

More than 1.4 million people have died worldwide and the global caseload is edging towards 60 million, according to Johns Hopkins University.