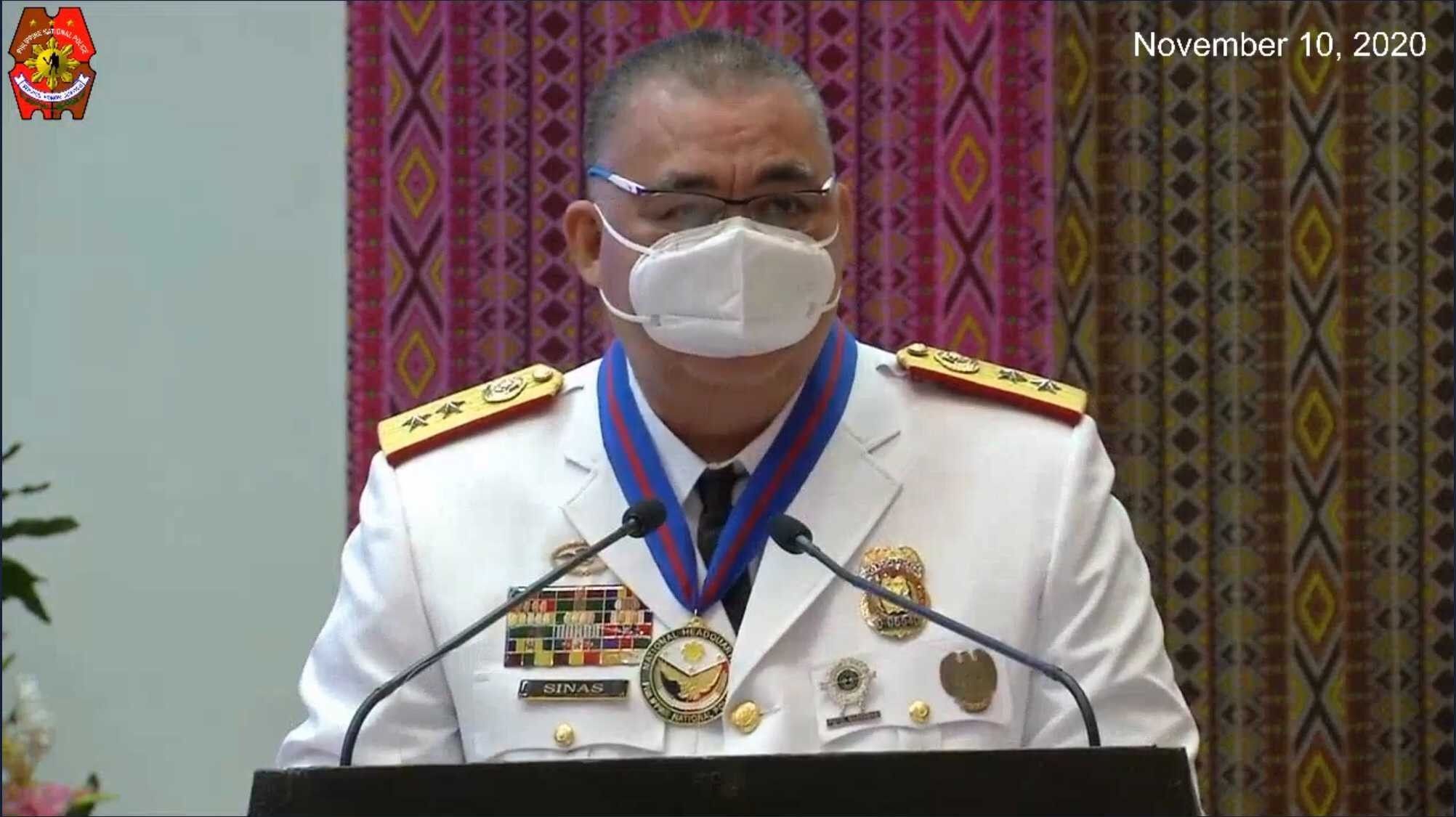 Newly installed PNP chief Debold Sinas delivers his address at the change of command ceremony in Camp Crame on November 10, 2020

MANILA, Philippines — The human rights commission has urged new PNP chief Maj. Gen. Debold Sinas to uphold justice and human rights in his stint, despite his appointment signaling that the Duterte administration’s war on drugs that had killed thousands will remain relentless.

Sinas’ rise at the helm of the police force came in an ironic turn of events as the now top law enforcer in the country faces criminal and administrative charges. His supposed quarantine violation in May was widely criticized, as the nation was forced to stay indoors due to the coronavirus pandemic while cops held a birthday party for him.

Apart from the said furor, a significant issue that remains to hound Sinas’ background was his years as regional police chief of Central Visayas, where killings were reported to be rampant under a joint police and military operation known as Oplan Sauron.

It had led two Senate committees to call for a probe on the wave of killings in Negros in the years 2018 and 2019, with the panels concluding in a report that “men, women and children suffered in the hands of lawless armed men.”

Lawyer Jacqueline de Guia, a spokesperson for the CHR, said PNP under Sinas should make itself available in probing human rights violations even when it involves their men.

“We also look forward to concrete actions from the PNP in realizing openness and genuine cooperation in investigating said human rights violations—even in cases when State officers and agents are allegedly implicated in their commission,” she said in a statement on Tuesday.

Now retired Gen. Camilo Cascolan, Sinas’ predecessor, had reported that over 4,600 PNP personnel had since been dismissed from service in a bid to clean up its ranks, which was part of CHR’s call.

This involved 870 cops who were demoted as well, including 851 suspended and 518 found positive for the use of illegal drugs.

“May the PNP continue to affirm its motto to “serve and protect”; live by the core values of Service, Honor and Justice; and be exemplars and advocates of the rule of law,” the commission added.

In his speech during the installment rites, Sinas has vowed to continue President Rodrigo Duterte’s anti-illegal drug campaign that had seen nearly 8,000 killed since 2016.

He has told the police force too, to “walk the talk” in carrying out their mandate, despite him and others supposedly violating government’s own regulations over the mañanita incident.

(My order is simple as the father of this organization: to walk the talk here in the PNP. Let us work according to our mandate for a peaceful and quiet community.)

International watchdogs and groups had long said that human rights violations persist under Duterte’s drug war, disputing government figures and putting the toll at over 30,000.

Malacañang in announcing Sinas’ appointment on Monday has recognized too that Sinas had played a significant role in the Oplan Tokhang.

And with him now in the post, on top of Duterte’s vow for the drug war to prevail in his last remaining years in office, it is most likely that the campaign will go on and the number of deaths will continue to rise.