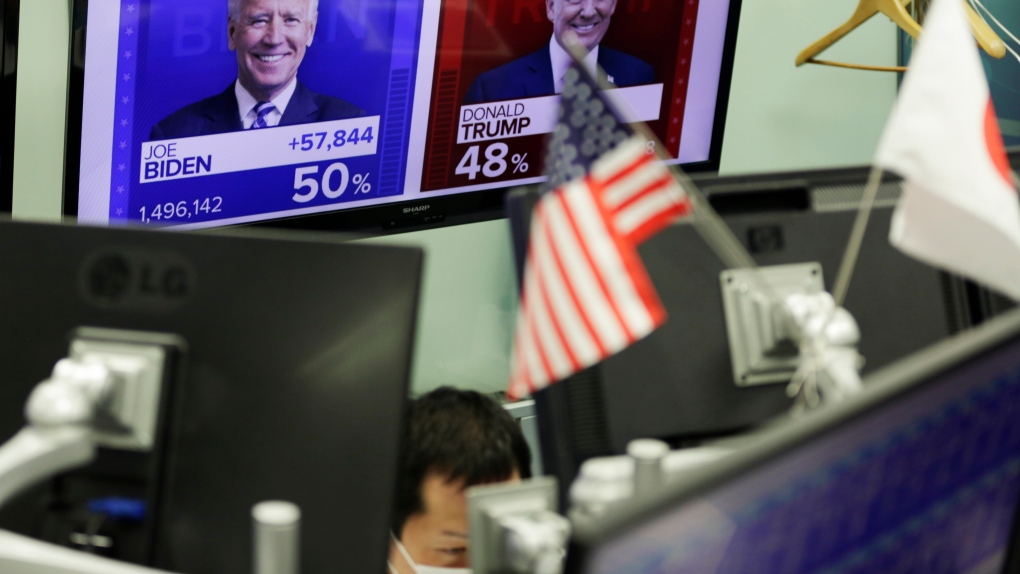 BEIJING — Global stock markets turned lower on Friday ahead of a U.S. jobs report and amid protracted vote-counting following this week’s American elections.

Markets have risen this week as investors bet on control of the U.S. Congress being split between Republicans and Democrats, which could mean low taxes and light regulation that investors like will stay in place.

“I find it remarkable how relaxed these markets are under the circumstances,” said Craig Erlam of Oanda in a report. “Hopefully, the faith investors have shown is rewarded, because the last thing we need is an extremely messy conclusion to what has already been a hostile and divisive election.”

Meanwhile, the U.S. jobs report for October is due later Friday. It is expected to show a slowdown in hiring for a fourth straight month as confirmed viral cases reach record levels and the loss of government aid deepens economic hardship.

Economists have forecast that employers added 580,000 jobs last month, down from 661,000 in September and 1.5 million in August. If that estimate proves accurate, last month’s gain will have been the weakest since employers began calling some employees back to work in May. And it would mean that the economy has regained only about 12 million of the 22 million jobs that vanished when the pandemic paralyzed the economy in early spring.

Joe Biden leads in vote counting for Tuesday’s U.S. presidential election, but President Donald Trump and his supporters are questioning the legitimacy of the totals with key states still counting ballots.

“Markets are still betting on a clear election outcome (presumably Biden),” analyst at Mizuho Bank said in a report.

Analysts warn that an extended court battle with no clear winner could increase uncertainty, which markets dislike, and drag down stocks.

Also Thursday, the U.S. Federal Reserve said its key interest rate will be left at a record low near zero. It reaffirmed its readiness to do more to support the economy under threat from a worsening coronavirus pandemic.

In energy markets, benchmark U.S. crude lost $1.09 to $37.70 per barrel in electronic trading on the New York Mercantile Exchange. The contract fell 36 cents on Thursday. Brent crude, the international price standard, declined $1 to $39.93 per barrel in London. It shed 30 cents the previous session.

Previous NFL bad beat: 49ers score with 4 seconds left to push the game over as Joe Buck and Troy Aikman crack jokes
Next How Pro-Democracy Protesters Drowned Out A MAGA Vote Suppression Campaign