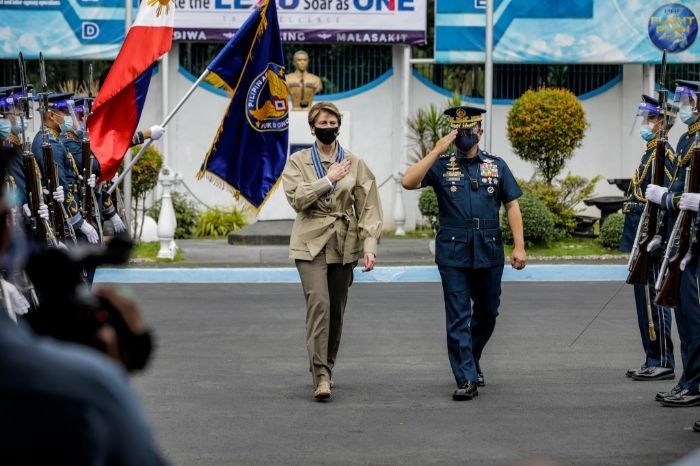 In this photo taken on Nov. 25, 2020, U.S. Secretary of the Air Force Barbara Barrett meets with senior Philippine defense and military officials in Manila.

MANILA, Philippines — US Air Force Secretary Barbara Barrett traveled to Manila to meet with top defense officials in the country on Wednesday, signaling continued military partnership between the Philippines and its longtime ally and former colonizer.

Barrett “underscored the importance of the U.S.-Philippine alliance to national and regional security, and discussed opportunities for greater bilateral security cooperation,” in a meeting with Philippine defense and military officials, a statement from the American embassy confirmed.

Related Stories
After fresh VFA extension, US reaffirms commitment to Philippines’ rights in WPS
Trump’s promise: US turns over weapons to Philippines
China incensed by ‘unreasonable’ US remarks on West Philippine Sea, region

“From joint counterterrorism efforts to humanitarian support, the US and Philippines have a long history of working together to protect global security through regional stability,” Barrett was quoted as saying.

She further highlighted American COVID-19-related assistance and disaster relief for recent typhoon victims, as well as ongoing US support for Philippine counterterrorism and maritime security efforts.

Defense Usec. Luna welcomed Barret’s visit, saying “we look forward to working with our U.S. counterparts in pursuit of our common goals and interests.”

“With our shared history and long-standing partnership with the U.S., we also look forward to continuing our cooperation on various aspects of defense and security, including the Philippines’ current thrust to modernize its Armed Forces,” Defense Assistant Secretary Avilla added.

Barrett’s visit coincides with the handover to the Philippine Navy of a ScanEagle Unmanned Aerial System, a P710 million drone seen to boost the Philippine military’s intelligence, surveillance, and reconnaissance capabilities. This, in turn, would strengthen maritime domain awareness and border security, the US embassy said.

“The Philippines is by far the largest recipient of U.S. military assistance in the Indo-Pacific region. Since 2015, the United States has delivered more than Php33 billion worth of planes, ships, armored vehicles, small arms, and other military equipment to the Philippines, while training side-by-side with our Filipino allies,” the press release further reads.

Barrett is the second top American defense official to visit Manila this week, following US National Security Adviser Robert O’Brien who on Monday welcomed the extension of the Visiting Forces Agreement (VFA) and reaffirmed the superpower’s commitment to protecting the Philippines’ sovereign rights in the West Philippine Sea.

Echoing earlier remarks made by US Secretary of State Mike Pompeo, ‘O Brien asserted that any armed attack on Filipino troops in the West Philippine Sea will trigger the 1951 Mutual Defense Treaty.

His remarks were shortly after slammed by Beijing as “unreasonable,” with the regional power accusing the US of making baseless accusations, interfering with China’s so-called internal affairs, and exaggerating tensions to create conflict.

The West Philippine Sea is the part of the South China Sea within the Philippines’ exclusive economic zone.

O’Brien was in Manila for the handover of Washington’s donation of defense materials worth approximately P868 million ($18 million), which US President Donald Trump promised to President Rodrigo Duterte during a phone call in April. He also met with National Security Advisor Hermogenes Esperon, Defense Undersecretary Luna and Rear Admiral Erick Kagaoan, AFP deputy chief of staff.

The Diplomat on Tuesday reported that top US officials were traveling to Southeast Asia in hopes of securing diplomatic continuity amid a fraught transition of power. Although he continues to refuse to concede the election to President-Elect Joe Biden, American media reported that President Trump finally approved the start of the formal transition of power this week.

Biden will take office in January 2021.

READ: Explainer: What can the Philippines expect from a Biden presidency?

A thread of major developments in the bilateral relations between the Philippines and the United States from April to December 2020. (Photo by AFP/Mark Cristino)

Citing Washington’s realignment of its position on the South China Sea with the 2016 arbitral ruling that invalidate Beijing’s expansive claims, O’Brien stresses that resources in the area belong to the Filipino people.

The US Embassy in the Philippines says the US government has turned over 150 laptop computers, printers, projectors and 80 sets of learning materials to the Department of Education through the United States Agency for International Development.

“This assistance is part of USAID’s Opportunity 2.0, a five-year, P1.9-billion ($37.5 million) project that works with DepEd, the Technical Education and Skills Development Authority, and local governments to support their ongoing programs to provide relevant education, employability skills, and work experience to out-of-school youth,” the US Embassy says in a statement.

The US government launches a new program to provide second-chance opportunities to at least 180,000 out-of-school youth in the Philippines.

Under the five-year “Opportunity 2.0” project, which is worth P1.9 billion, the USAID will partner with DepEd and TESDA to augment their ongoing programs that provide relevant education, employability skills and work experience.

“Through this new partnership, we can leverage a range of resources to maximize the potential of the Filipino youth, particularly those who are out-of-school or unemployed. With the right knowledge, attitudes, and skills, they will play a pivotal role in this great country’s growth and success over the long-term,” US Ambassador Sung Kim says.

US Secretary of State Mike Pompeo called Foreign Affairs Secretary Teodoro Locsin Jr. to discuss the recent change in US policy on maritime claims in the South China Sea, the US Department of State says.

The two foreign ministers also discussed US support for Southeast Asian coastal states upholding their sovereign rights and interests consistent with international law, as well as opportunities for further maritime cooperation between the two countries.

“The two secretaries also discussed the strong economic, security, and people-to-people ties that bind our two countries,” the statement read.

The US Army and Marine Corps service members, in partnership with the Philippine Air Force, Army and Coast Guard, deliver an additional P11.4 million ($236,000) worth of personal protective equipment and medical supplies to hospitals in 11 cities in the Philippines.

The latest donation brings the total assistance of the US government to the Philippines’ efforts against COVID-19 to P989 million (more than $20 million).

“This latest delivery of U.S. government assistance for Filipino frontliners in the battle against COVID-19 is a testament to our ongoing commitment to help the Philippines defeat the pandemic,” US Ambassador Sung Kim says.

2020-11-25
AtinitoAdmin
Share
Previous Edmundston officer who laughed talking about Chantel Moore’s death must take Indigenous course
Next BETTER BE BOHOL: We found the safest hotels for your stay