A large explosion struck the airport in the southern Yemeni city of Aden on Wednesday, shortly after a plane carrying the newly formed cabinet landed there, security officials said. At least 25 people were killed and 110 were wounded in the blast. 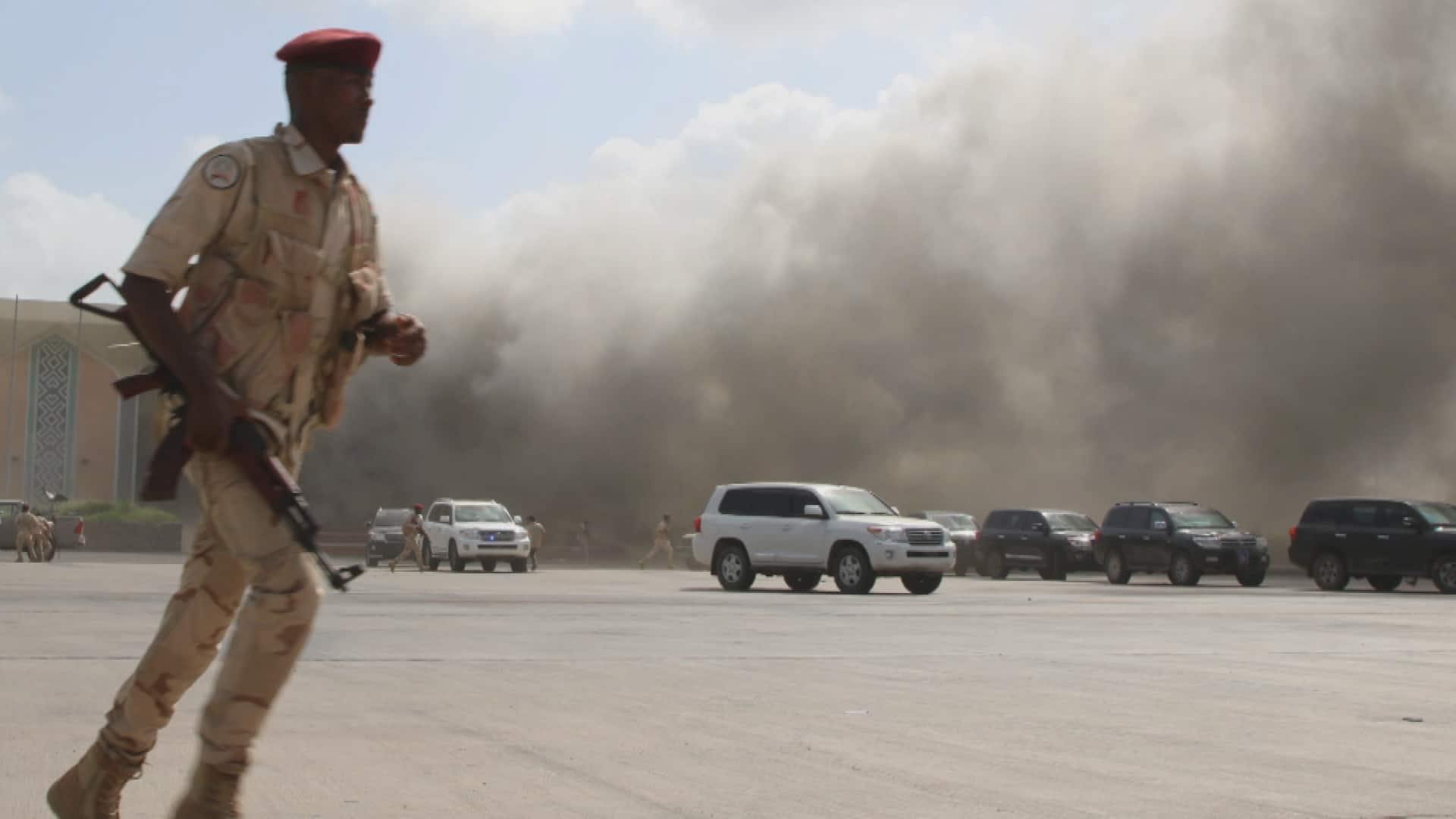 A powerful and deadly explosion ripped through Aden airport in Yemen as members of a new unity government disembarked from an airplane.

A large explosion struck the airport in the southern Yemeni city of Aden on Wednesday, shortly after a plane carrying the newly formed cabinet landed there, security officials said. At least 25 people were killed and 110 wounded in the blast.

Yemen’s internationally recognized government said Iran-backed Houthi rebels fired four ballistic missiles at the airport. Rebel officials did not answer phone calls from The Associated Press seeking comment. No one on the government plane was hurt.

Officials later reported another explosion close to a palace in the city where the cabinet members were transferred following the airport attack.

The Saudi-led coalition later shot down a bomb-laden drone that attempted to target the palace, according to Saudi-owned Al-Arabiya TV channel.

The cabinet reshuffle was seen as a major step toward closing a dangerous rift between the government of embattled Yemeni President Abed Rabbo Mansour Hadi, who has been in exile in Saudi Arabia, and southern separatists backed by the United Arab Emirates.

Hadi’s government and the separatists are nominal allies in Yemen’s years-long civil war that pits the Saudi-led, U.S.-backed military coalition against the Houthis, who control most of northern Yemen, as well as the country’s capital, Sanaa.

Ministers ran back to plane

Media footage from the scene at the airport showed members of the government delegation disembarking as the blast shook the grounds. Many ministers rushed back inside the plane or ran down the stairs, seeking shelter.

Thick smoke rose into the air from near the terminal building. Officials at the scene said they saw bodies lying on the tarmac and elsewhere at the airport.

Yemeni Communication Minister Naguib al-Awg, who was also on the plane, told The Associated Press that he heard two explosions, suggesting they were drone attacks.

Yemeni Prime Minister Maeen Abdulmalik Saeed and the others were quickly whisked from the airport to Mashiq Palace in the city.

Military and security forces sealed off the area around the the palace.

“It would have been a disaster if the plane was bombed,” al-Awg said, insisting the plane was the target of the attack as it was supposed to land earlier.

Saeed tweeted that he and his cabinet were safe and unhurt. He called the explosions a “cowardly terrorist act” that was part of the war on “the Yemeni state and our great people.”

Foreign Minister Ahmed Awad Bin Mubarak blamed the Houthis for the attacks. His ministry said in a statement later that the rebels fired four ballistic missiles at the airport, and launched drone attacks at the palace, the cabinet’s headquarters. They did not provide evidence.

Health Minister Qasem Buhaibuh said in a tweet that the attacks at the airport killed at least 25 people and wounded 110 others, suggesting the death toll could increase further because some of the wounds were serious.

Images shared on social media from the scene showed rubble and broken glass strewn about near the airport building and at least two bodies, one of them charred, lying on the ground.

In another image, a man was trying to help another man whose clothes were torn to get up from the ground.

The International Committee of the Red Cross said three of its workers were killed in the airport blast: two Yemeni nationals and a Rwandan. Three other workers were wounded. ICRC workers were at the airport transiting with other civilians when the blast took place, it said.

“This is a tragic day for the ICRC and for the people of Yemen,” said Dominik Stillhart, the ICRC’s director of operations.

UN special envoy for Yemen, Martin Griffiths, condemned the explosion as an “unacceptable act of violence.” He said in a tweet that it was “a tragic reminder of the importance of bringing #Yemen urgently back on the path towards peace.”

Egypt, Jordan and the Arab League also condemned the attacks.

The ministers were returning to Aden from the Saudi capital, Riyadh, after being sworn in last week as part of a reshuffle following a deal with rival southern separatists.

The Saudi ambassador to Yemen, Mohammed al-Jaber, described the attack as a “cowardly terrorist act targeting the Yemeni people, their security and stability.”

Despite “the disappointment and confusion caused by those who create death and destruction,” the peace agreement between the government and southern separatists “will go forward,” he insisted.

Naming a new government was part of a power-sharing deal between the Saudi-backed Hadi and the Emirati-backed separatist Southern Transitional Council, an umbrella group of militias seeking to restore an independent southern Yemen, which existed from 1967 until unification in 1990.

The blast underscores the dangers facing Hadi’s government in the port city, which was a scene of bloody fighting between forces of the internationally recognized government and the U.A.E.-backed separatists.

In a video message posted on his Twitter account later, Saeed, the Yemeni prime minister, said his government was in Aden “to stay.” The city has been the seat of Hadi’s government since Houthi rebels overran the capital Sanaa in 2014.

Last year, the Houthis fired a missile at a military parade of newly graduated fighters of a militia loyal to the U.A.E. at a military base in Aden, killing dozens.

In 2015, then-Yemeni prime minister Khaled Bahah and members of his government survived a missile attack, blamed on the Houthis, on an Aden hotel used by the government.

Yemen, the Arab world’s poorest country, has been engulfed in civil war since 2014, when the Shia Houthi rebels overran the north and Sanaa. The following year, a Saudi-led military coalition intervened to wage war on the Houthis and restore Hadi’s government to power.

The war has killed more than 112,000 people, including thousands of civilians. The conflict also resulted in the world’s worst humanitarian crisis.