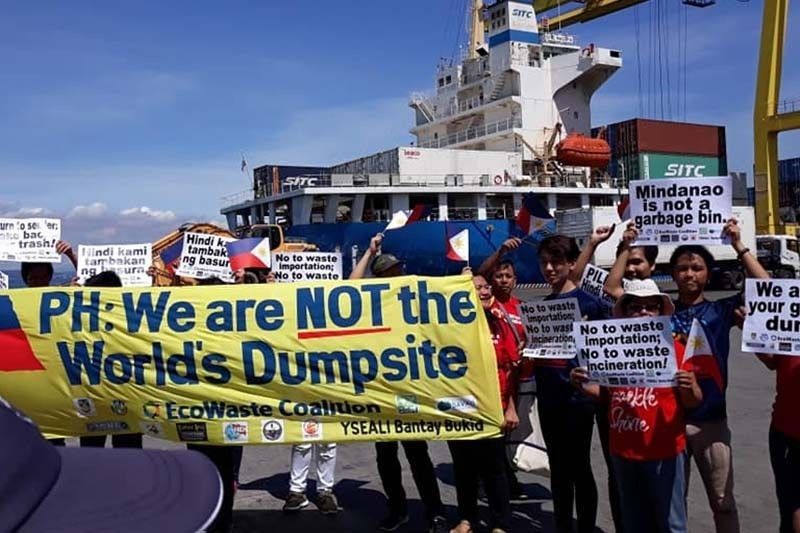 Groups signify their opposition to foreign waste dumping during the send-off ceremonies for the seized mixed plastic waste shipment from Hong Kong in this undated photo.

MANILA, Philippines — Two environmental groups called on Congress to pass a robust and comprehensive waste importation ban, which can stop the dumping of foreign waste in the Philippines.

Greenpeace Philippines and EcoWaste Coalition said that the Philippines continues to be a dumping ground of rich countries because of the lack of strong policies to protect the country’s borders from waste.

They stressed that allowing waste trade to continue poses threats to public health, degrades and contaminates the environment, and violates existing laws and global agreements.

“The only way to stop waste trade is to ban it outright. Current laws put exception on certain kinds of wastes and this has created major holes that have been exploited by illegal and hazardous waste traders. Our laws need to have teeth in order to be effective,” Greenpeace campaigner Marian Ledesma said in a release Friday.

In a position paper, the two organizations said a waste importation ban would allow the country to focus on its own waste management issues and fully implement the Ecological Solid Waste Management Act of 2000, enact measures that would curb waste generation such as single-use plastic ban, and promote a “zero-waste” society.

“Enforcing a ban on waste importations will also effectively decrease cases of injustices. Such a law would ensure that human rights harms, public health threats and environmental crimes related to waste trade are recognized,” the groups’ position paper read.

Aside from calling for a comprehensive waste ban, Greenpeace and EcoWaste also urged the government to ratify the Basel Convention Ban Amendment, which prohibits the export of hazardous waste from developed to developing countries for any reason, including recycling.

The entry of waste labelled for recycling are allowed under current Philippine laws. But there have been cases of waste shipments purportedly for recycling that have been found to be mixed municipal waste or highly contaminated.

“Ratification would also put measures in place that protect Filipinos from harm and pollution arising from transboundary shipment of hazardous waste. It also safeguards our right to a clean and healthy environment as well as other rights which are threatened by the entry of hazardous waste into our country,” the groups said.