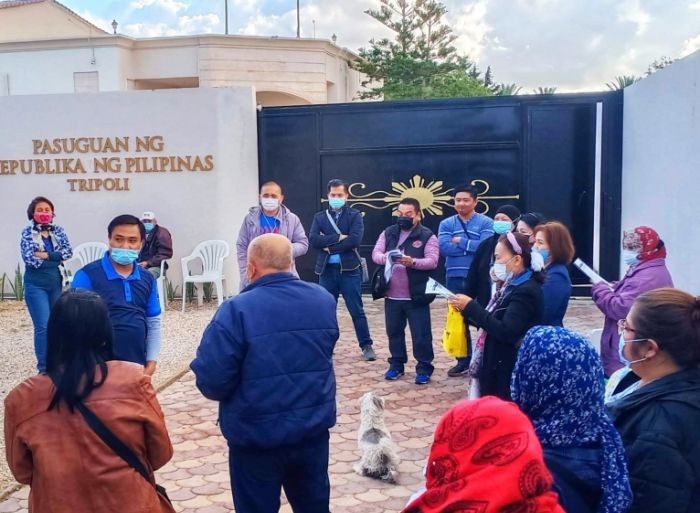 Officials from the Philippine Embassy in Tripoli brief 19 distressed Filipinos who requested assistance in returning to the Philippines. The repatriates were tested by doctors from the National Center for Disease Control (NCDC) on 30 November 2020 to rule out any coronavirus infection prior to their departure for Manila on 02 December 2020.

MANILA, Philippines — Another 39,957 repatriations last month pushed the total number of migrants returned home due to the lingering coronavirus pandemic past 270,000, the Department of Foreign Affairs said Wednesday.

A Filipina domestic worker who won a long-running rape and frustrated murder case against a Kuwaiti cop was among those repatriated in November. “Her return to the Philippines is a monumental event and a win for the country,” DFA Undersecretary Sarah Arriola said.

The following is a breakdown of last month’s repatriates by area:

“The DFA also organized three chartered flights which flew home 460 distressed overseas Filipinos who have been stranded in China, Saudi Arabia, and Timor Leste for several months. These chartered flights were shouldered by the DFA through its augmented ATN funds under Republic Act No. 11494 or the Bayanihan to Recover as One Act,” the department added.

Medical repatriations for 21 migrant Filipinos from Bahrain, Brunei, Canada, Cuba, Italy, Kuwait, Laos, Oman and Pakistan were also carried out by the agency.

Meanwhile, the DFA said it brought home nine Filipino seafarers after their shipping vessel was abandoned by its owner at the Port of Djibouti. It added that the ship crew members arrived in Manila on November 24 after being stranded onboard the vessel for over 14 months.

“The Department through the Office of the Undersecretary for Migrant Workers’ Affairs coordinated with its missions abroad to lobby hard with the Djibouti representatives in the International Maritime Organization in London, the United Nations in New York and the Djibouti Embassy in Tokyo to allow the disembarkation of the Filipino crew of MV Arybbas on humanitarian grounds.” — Bella Perez-Rubio