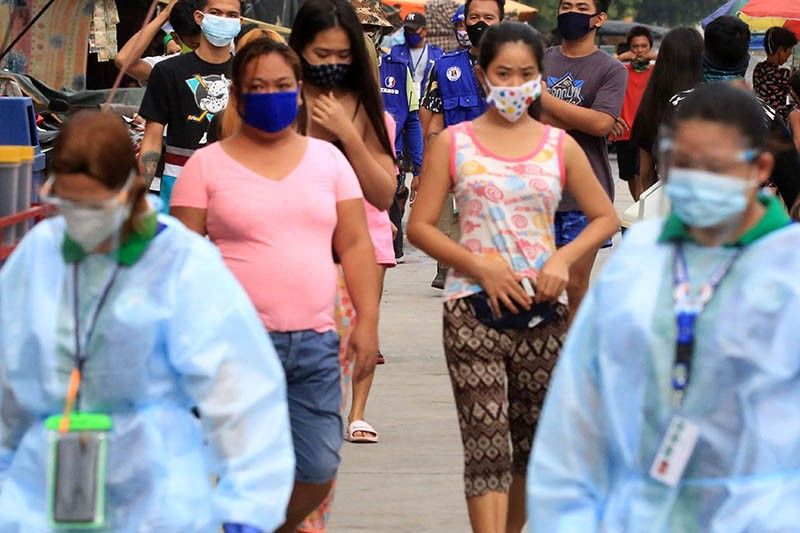 Among the total cases, exactly 23,793 — or 5.0% — are marked as active cases, referring to patients who are still recovering in hospitals or quarantine facilities.

Related Stories
LIVE updates: COVID-19 and extended quarantine in the Philippines
Some Cabinet members, troops get vaccines ahead of FDA approval
US now included in travel ban against new COVID-19 variant
According to the DOH’s latest case bulletin, the total number of recoveries now stands at 439,509 after another 518 people were reported by the DOH to have survived the virus.

However, the death toll linked to the pathogen rose to 9,230 after another 68 fatalities were recorded.

The day before, the DOH also documented 886 additional cases of the virus.

According to figures from business data platform Statista though, the Philippines still ranks among the bottom five in coronavirus tests performed in the most impacted countries worldwide as of December 16, 2020, with only 57,065 tests conducted per million population.

The following areas posted the most number of cases per the health department’s latest bulletin:

The added cases come on the heels of a broader travel ban on territories where cases of the new COVID-19 variant first reported in the UK, which is believed to spread faster, have been recorded—a list that now includes the United States.

Over the past nine months of community quarantine in the Philippines, President Rodrigo Duterte has asserted that achieving herd immunity through vaccination is the only way out of the pandemic for the country moving forward.

‘We vaccinated ourselves’: VIP vaccinations justified by gov’t officials

At a time when no vaccine has yet been approved by the country’s Food and Drug Administration, though, officials under the Duterte administration have begun defending and justifying the premature and advanced inoculation of smuggled—and consequently illegal—vaccines by members of the president’s security detail.

In an interview aired over ANC earlier Thursday morning, Brig. Gen. Jesus Durante III of the Presidential Security Group admitted: “We vaccinated ourselves. It’s so easy. It is within our compound and our command.”

“We are soldiers and the bottom line here is that we have to accomplish our mission at all costs,” Durante also said, repeating earlier narratives that the illegal vaccinations were done to protect the president.

Whether the unauthorized vaccination was meant to protect the president or not is beside the point, as the Palace had said that health workers were first on the list of priority beneficiaries for vaccination, while uniformed personnel were the fifth priority. Yet the Palace and the interior department have urged the public to “accept it”, saying there was nothing wrong with the PSG doing so—despite no vaccines being authorized for use yet.

Also on Thursday, justice secretary Menardo Guevarra disclosed that he had already directed the National Bureau of Investigation to probe the “reported unauthorized distribution and administration of unregistered anti-COVID-19 vaccines” for possible violation of the FDA act, the consumer act, and the medical practice act, among others.

“This is a general instruction. Not zeroing in on the PSG or on any particular incident of unauthorized vaccination,” he told reporters.

Around the world, over 82.3 million cases of the virus have been recorded since it first emerged last December, leading to almost 1.8 million deaths according to data from the World Health Organization.

Asked how he would rate the Department of Health’s performance throughout the year, health secretary Francisco Duque said at a press briefing Thursday: “From what I see on the ground and in my interactions with the DOH team, I would give them 9-10 in terms of great effort to contribute to the national government’s coronavirus response in every aspect of our five-point strategy against COVID-19.”

“I salute everyone in the Department of Health, especially the doctors. It’s true that there were missteps and mistakes, but those serve as lessons for us to be more successful in the fight against COVID. But this is new, and no other country has done that well against COVID-19. But what we see is their passion,” he added.