Biden says he’ll call for 100 days of mask-wearing, will keep Fauci on

Joe Biden said Thursday that he will ask Americans to commit to 100 days of wearing masks as one of his first acts as president, stopping just short of the nationwide mandate he’s pushed before to stop the spread of the coronavirus. 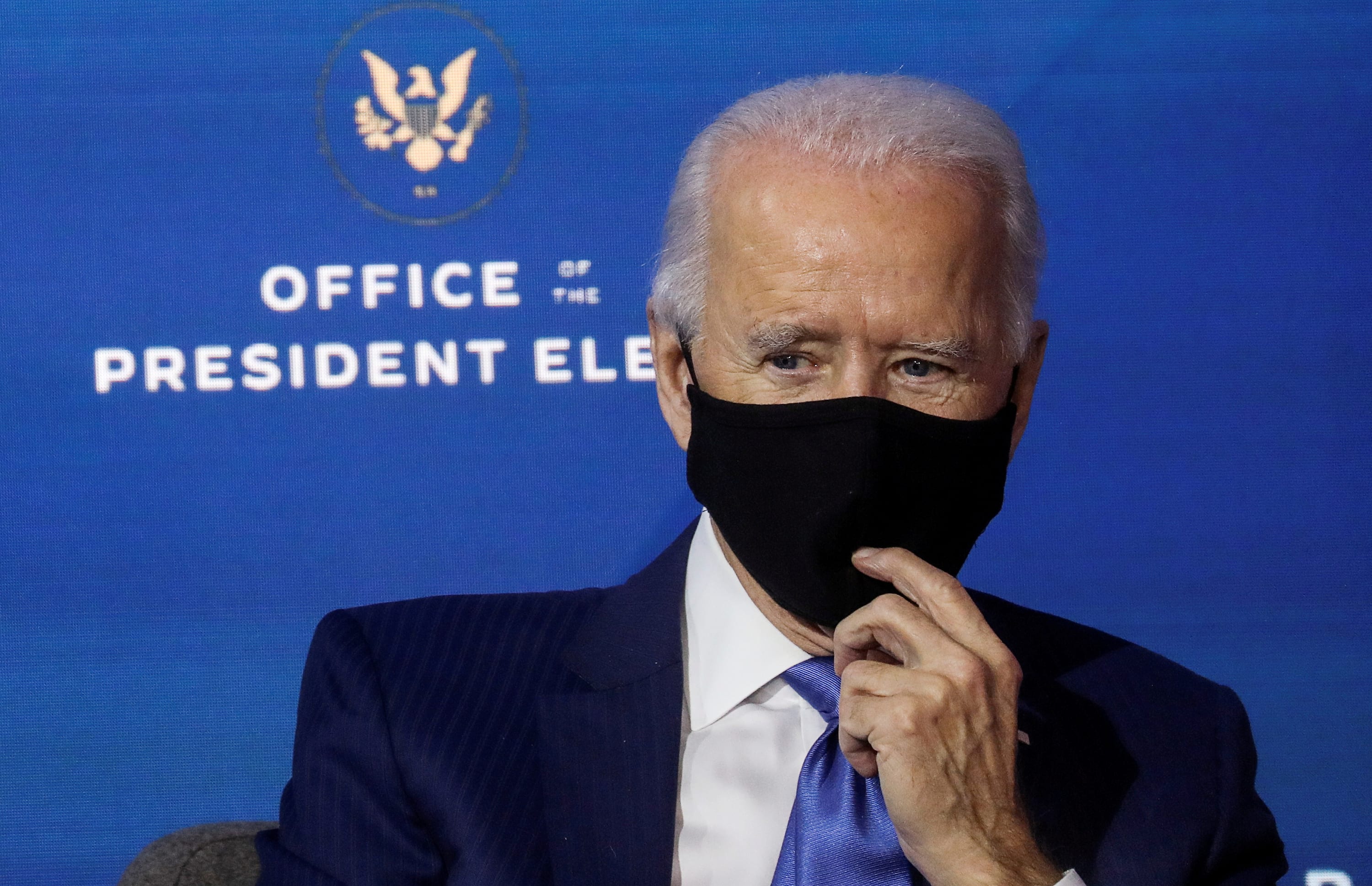 Joe Biden to encourage mask-wearing early in his term

In an interview with CNN’s Jake Tapper, U.S. president-elect Joe Biden says he’ll ask Americans to wear masks for the first 100 days after his administration takes over on Jan. 20.

Joe Biden said Thursday that he will ask Americans to commit to 100 days of wearing masks as one of his first acts as U.S. president, stopping just short of the nationwide mandate he’s pushed before to stop the spread of the coronavirus.

The move marks a notable shift from President Donald Trump, whose own skepticism of mask-wearing has contributed to a politicization of the issue. That’s made many people reluctant to embrace a practice that public health experts say is one of the easiest ways to manage the pandemic, which has killed more than 275,000 Americans.

The president-elect has frequently emphasized mask-wearing as a “patriotic duty” and during the campaign floated the idea of instituting a nationwide mask mandate, which he later acknowledged would be beyond the ability of the president to enforce.

Speaking with CNN’s Jake Tapper, Biden said he would make the request of Americans on Inauguration Day, Jan. 20.

Biden also said he asked Dr. Anthony Fauci to stay on in his administration, “in the exact same role he’s had for the past several presidents,” as the director of the National Institute of Allergy and Infectious Diseases, the nation’s top infectious-disease expert.

The president-elect said he’s asked Fauci to be a “chief medical adviser” as well as part of his COVID-19 advisory team.

Ex-presidents would get vaccine

Regarding a coronavirus vaccine, Biden said he’d be “happy” to get inoculated in public to assuage any concerns about its efficacy and safety.

“People have lost faith in the ability of the vaccine to work,” Biden said, adding that “it matters what a president and the vice-president do.”

“I may end up taking it on TV or having it filmed, just so that people know that I trust this science,” Obama added.

Obama undergoing immunization may not be possible for the foreseeable future, though.

The Food and Drug Administration will consider authorizing emergency use of two vaccines made by Pfizer and Moderna later this month, but current estimates project that no more than 20 million doses of each vaccine will be available by the end of this year. Each product also requires two doses, meaning shots will be rationed in the early stages.

Health-care workers and nursing home residents should be at the front of the line, the advisory committee on immunization practices, an influential government advisory panel, said earlier this week. That encompasses about 24 million people out of a U.S. population of around 330 million.

Still, former president Bill Clinton would “definitely” be willing to get a vaccine, as soon as one is “available to him, based on the priorities determined by public health officials,” spokesperson Angel Urena said.

“And he will do it in a public setting if it will help urge all Americans to do the same,” Urena said in a statement Thursday.

Urena declined to answer a question on whether Clinton’s team has been in touch with advisers to other former presidents about perhaps setting up a joint public immunization session whenever that might be possible.

“First, the vaccines need to be deemed safe and administered to the priority populations,” Ford told the network. “Then, president Bush will get in line for his, and will gladly do so on camera.”

Ford did not respond to a message seeking comment Thursday.

Trump says he’ll be criticized no matter what

The overlapping sentiments by three former presidents come as the U.S. recorded more than 3,100 COVID-19 deaths in a single day, obliterating the record set last spring.

The number of Americans hospitalized with the virus has eclipsed 100,000 for the first time, and new cases have begun topping 200,000 a day, according to figures released Thursday.

President Donald Trump has said that he’ll get criticized no matter what he does on taking the vaccine — whether he’s first or last.

During the presidential campaign, Trump’s re-election team tried to criticize challenger Joe Biden as being anti-vaccine. But the former vice-president said months ago that he’d take “a vaccine tomorrow” if one became available.

Why the U.S. isn’t in desperate need of the Keystone XL pipeline

World U.S. Senate Republican leader Mitch McConnell is proposing to push back the start of …