Long road ahead, but pro-admin bets lead in early poll for 2022 elections 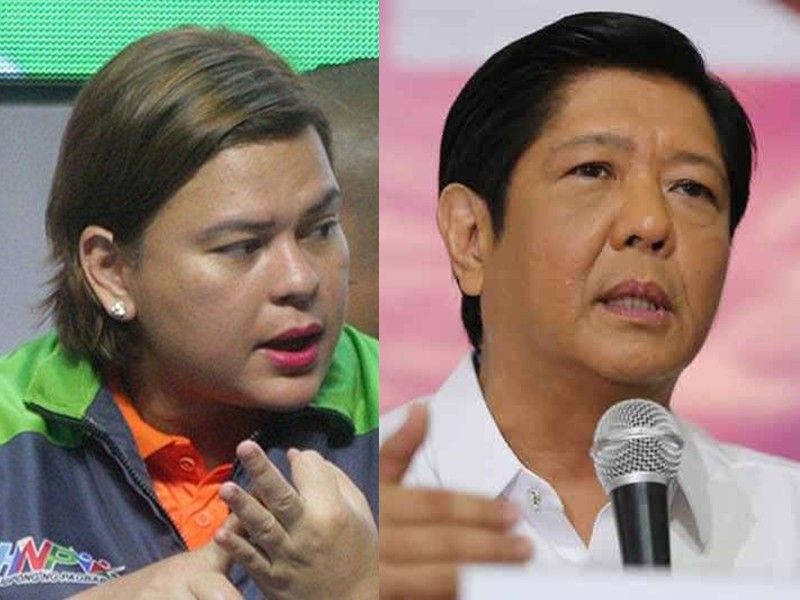 This collage shows the top contenders for the 2022 elections per a Pulse Asia survey: Davao City Mayor Sara Duterte and ex-senator Bongbong Marcos Jr.
MANILA, Philippines — The country’s next elections is set more than a year from now but results of a survey has shown pro-administration individuals leading the list to succeed President Rodrigo Duterte in 2022.
Surveys as early as this rarely predict the outcome of the elections, with many happenings still to transpire as the political arena unfolds in the coming months.
For one, then Senate President Manny Villar was leading in the surveys for the 2010 elections before then Sen. Benigno “Noynoy” Aquino III entered the picture in September 2009.
In the 2016 presidential polls, it was then Vice President Jejomar Binay who was the early frontrunner, but Sen. Grace Poe later on followed and then Davao City Mayor Rodrigo Duterte overtaking the surveys up to the election date.
In Pulse Asia’s findings, there were top five names that emerged: Davao City Mayor Sara Duterte (26 points), former Sen. Bongbong Marcos and Sen. Grace Poe (14 points), Manila Mayor Isko Moreno (12 points) and Sen. Manny Pacquiao (10 points).
Vice President Leni Robredo was the sole opposition candidate who emerged in the list with 8 points, at sixth place.
Names for vice president, which is elected separately from the chief executive, was also not far: Moreno (17%), Duterte (16%), Senate President Vicente Sotto III (14%), Marcos and Pacquiao (11%).
While the results had not been made public yet by the polling center, it nonetheless confirmed the study which only surfaced on social media through a Twitter post by historian Manolo Quezon III on Thursday.
It ran from the period of November 23 to December 2 and had 2,400 respondents. The study’s margin of error was not immediately clear.
Those who took part in it were asked: “Of the people on this list, whom would you vote for as president of the Philippines if the May 2022 elections were held today and they were candidates?”
Pulse Asia also gave respondents the chance to mention names not included in the list.

If the results were to be classified per location, Marcos with 20% would lead in Metro Manila, which in the 2019 elections had seven million registered voters.

The son of the late dictator Ferdinand is followed by Moreno, who is in his first term as local chief executive of the Philippine capital at 18%.

Duterte trails with 16%. while Poe and Pacquiao both have 12%.

The president’s daughter yielded 29% in Visayas, Poe with 15%, Marcos and Pacquiao with 13% each, and Moreno with 9%.

Mindanao had 58% for Duterte in the region she hails from, leaving other possible bets with single digits: Pacquiao with 9%, Poe with 8%, Marcos with 7% and Moreno with a dismal 2%.

While at sixth place, Robredo was third in Luzon with 13%, in Metro Manila with 7%, Visayas with 6% and Mindanao with 2%.

Marcos was second in ABC with 21%, while Pacquiao and Poe both with 10% and Moreno with 8%.

Poe, meanwhile, is second in Class E with 18%, Pacquiao following with 14%, Marcos with 11% and Moreno with 9%. Robredo stood at 8% in each of the said classes.

In the Senate, the following names with their ranks have floated in the said Pulse Asia survey:

The next presidential elections could stand as a referendum of the Duterte administration that has figured in a series of controversies in 2020 alone, depending on who the president would endorse as his candidate.

It is set in May 2022, with the filing of candidacies usually taking place by October before the said year and the campaign season by February of the next year.

With the ongoing coronavirus pandemic, changes are expected on the conduct of elections in the Philippines such as campaigning with mass gatherings prohibited as well with the actual voting come election day.

Previous Philippines ends year in pandemic with over 474,000 coronavirus infections
Next Moms are welcoming the first wave of ‘coronial’ babies — but experts say to expect fewer births