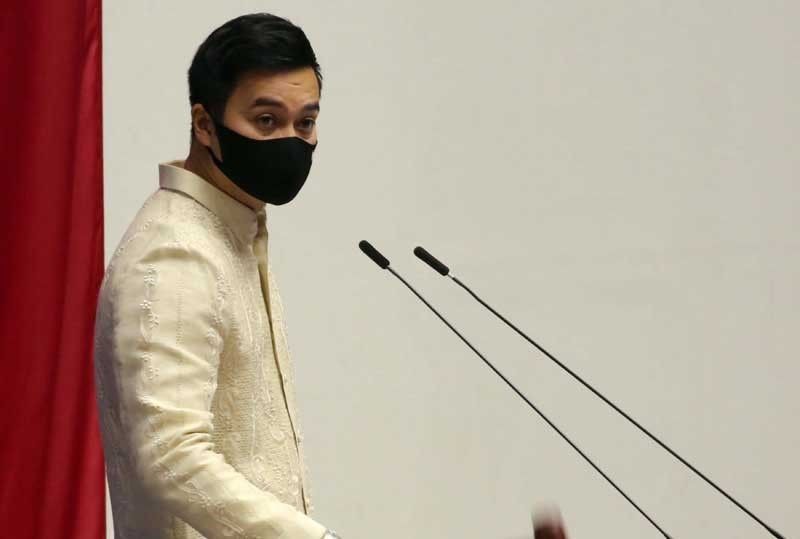 Speaker Lord Allan Velasco presides over a House session in this undated photo.

MANILA, Philippines — House Speaker Lord Allan Velasco on Monday joined the chorus of lawmakers condemning the shooting of two civilians in Paniqui, but his statement came short of mentioning legislative reforms to address the longstanding problem within the police force.

A harrowing footage that has gone viral on the Internet showed Police SMSgt. Jonel Nuezca shooting Sonya Gregorio and her son Frank Anthony, who were both unarmed after figuring in a heated argument.

Nuezca had since been charged by Tarlac City prosecutors for two counts of murder, with the incident drawing outrage on social media and lawmakers demanding accountability.

"It is our fervent hope that the circumstances surrounding their deaths are investigated thoroughly and that justice is ultimately served," said Velasco. "The culprit, Police Officer Jonel Nuezca, must not go unpunished and that his effective prosecution must be ensured."

He has said that the incident puts a highlight for PNP's leadership to "remind its ranks on the proper and responsible use of their weapons and that they should, as much as possible, apply non-violent means at all times."

The remarks, however, made no calls for reforms that would aid in solving the killing of civilians by the police. This is in contrast to a resolution filed in the Senate calling for an inquiry on what members of the upper chamber called as "series of unlawful killings."

Interior Secretary Eduardo Año has called the incident as an isolated one, a tone that Palace has since followed through. This is despite the Paniqui shooting being the latest in a string of documented cases of police brutality this year.

Rep. Lawrence Fortun (Agusan del Norte) has said too that Congress should "help eradicate the plague of police criminality and brutality," suggesting that the PNP's Internal Affairs Service be transferred instead to the justice department.

"This latest instance of a police officer mercilessly and brazenly killing unarmed persons is not an isolated incident. It is yet another among multitudes of police brutality," Fortun said.

In 2019, at the height of the 'ninja cops controversy,' Party-list Rep. Jericho Nograles (PBA) filed House Bill 3065 that would make the IAS independent from the PNP, including from influence from its top officials.

The proposed measure, however, remains pending with the Committee on Public Order and Safety.

Rep. Ruffy Biazon (Muntinlupa), who is a committee member, told Philstar.com that apart from the said bill, no other proposed legislation had been filed in the lower chamber to address incidents such as this.

"I'm not aware [of] a reform bill that would specifically address the issue behind the behavior of Nuezca," he said in an exchange. "The bodycam bill isn't applicable in this case because he was off duty."

The said measure, filed in the Senate, would require law enforcers to activate recording devices in their operations where there is an immediate threat to life and safety.

Instead, he said the DILG and the PNP should treat the killing as a sign "of something that is defective in the institution."

"They shouldn't treat it as an isolated case, but look at it as a symptom of an institutional ill," Biazon said, adding that Congress would be ready to pass laws should PNP's evaluations show that the solutions require legislation.

Party-list Rep. Ron Salo (Kabayan), vice chairman of the House Committee on Human Rights, also in an exchange called the Paniqui shooting as an isolated incident.

He has, however, said it showed how some cops may be "psychologically unfit to be in the service and be entrusted with a firearm" and is eyeing to file a measure that would strengthen psychological evaulation of law enforcers.

"In addition, passing an annual psychological evaluation shall be made a prerequisite for their continued stay in the service," he said.

The former House Speaker and once a key ally of President Rodrigo Duterte said PNP chief Debold Sinas should not be in his post "if the chief cannot effectively lead PNP."

"Failure of leadership is not acceptable," he said. "Lives are at risk. The credibility of the police force is in ruins. Reform the PNP or resign."

The year had seen a series of violations committed by PNP personnel, including that of Sinas for his birthday bash.

House Deputy Minority Leader Carlos Zarate, disputing the "isolated incident" narrative, said cases of police misconduct also include the death of soldiers in a shootout with Sulu police as well as the killings of elderly ex-NDF peace consultants Eugenia Magpantay and Agaton Topacio in November.

The Commission on Human Rights had since condemned the "brazen and senseless" killing of the Gregorios, saying the Duterte administration could not claim to be committed to upholding human rights when it allows for impunity to prevail in its failure to hold perpetrators to account. — Christian Deiparine with reports from Franco Luna and Xave Gregorio