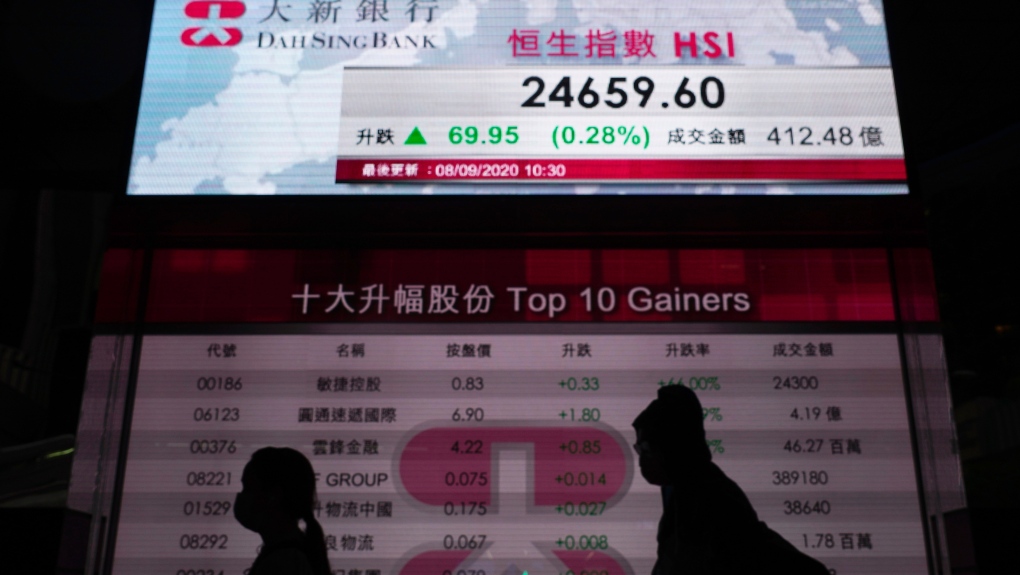 Shares opened higher in Europe on Tuesday after a lacklustre day in Asia as investors wait to see if Congress can break a logjam on delivering more aid to people, businesses and local governments affected by the coronavirus pandemic.

Markets are also watching for the outcome of a meeting by the Federal Reserve, which ends Wednesday. No change in interest rates is expected, but the Fed could announce steps to try to offset the pandemic’s increasing drag on growth.

Benchmarks rose in Paris, Frankfurt and London but fell in Tokyo and Shanghai. U.S. futures advanced.

Talks on terms of Britain’s departure from the European Union have continued, with the EU’s chief negotiator Michel Barnier saying he still firmly believes that a post-Brexit trade agreement is possible.

Only two main issues remain to be settled as the two sides teeter on the brink of a no-deal departure. They have committed to a final push ahead of Jan. 1, when a transitional period following Britain’s Jan. 31 departure from the bloc is to end.

During Asian trading, Japan’s benchmark Nikkei 225 index fell 0.3% to 26,687.84 after Prime Minister Yoshihide Suga announced the suspension of a travel promotion program that has helped businesses but also is thought to have contributed to a resurgence of coronavirus outbreaks.

The program was suspended from Dec. 28-Jan. 11, basically the entire New Year rush period, when most families head out on holidays or back to their hometowns. The Go To Travel program and another dubbed Go To Eat mainly provided steep discounts on hotel rooms and meals and has helped cushion the blow from the loss of nearly all inbound foreign tourism due to pandemic-related controls and concerns.

Also Tuesday, China’s government announced a raft of monthly statistics showing retail sales, industrial output and investments in factory equipment and other fixed assets rose as expected in November. However, the Shanghai Composite index declined 0.2% to 3,367.23.

“Asia appears to have moved into a wait-and-see state, ahead of the Federal Reserve rate decision on Thursday Asian time, and more clarity of US stimulus progress,” Jeffrey Halley of Oanda said in a commentary.

Extending its pullback from recent months of gains, the S&P 500 fell 0.4% to 3,647.49 on Monday after having gained 0.9% earlier in the session. It was its fourth straight decline, the first since September.

Treasury yields were mostly higher, a sign of optimism in the economy. The yield on the 10-year Treasury was steady at 0.90%.

Health care workers and nursing home residents are first in line for the shots, and the hope is that a wider rollout next year will help curb the pandemic and pull the economy back toward normal following the devastation of this year.

The economy is slowing as coronavirus counts surge and governments restore varying restrictions on social activity and businesses.

Top Washington negotiators have persevered with efforts to find agreement on COVID-19 relief on Monday, Those talks have been stalled by bitter partisanship, with rank-and-file Democrats appearing increasingly resigned to dropping, for now, a scaled-back demand for fiscal relief for states and local governments whose budgets have been thrown out of balance by the pandemic.

“Again, it feels like we are stuck in the negative feedback loop,” Stephen Innes of Axi said in a commentary. “Unless policymakers overdeliver on market expectations, especially at this time of year when our risk-taking proclivities give way to profit-taking, it seems virus-related economic restrictions will never cease to weigh as the market (continues) to straddle that fence between hope and reality.”

In other trading, benchmark U.S. crude oil shed 13 cents to $46.86 per barrel in electronic trading on the New York Mercantile Exchange. It gained 42 cents to $46.99 per barrel on Monday.

Brent crude, the international standard, gave up 18 cents to $50.11 per barrel.

Retail sells fell by 2.1% in May, but will likely to climb further in June: StatCan