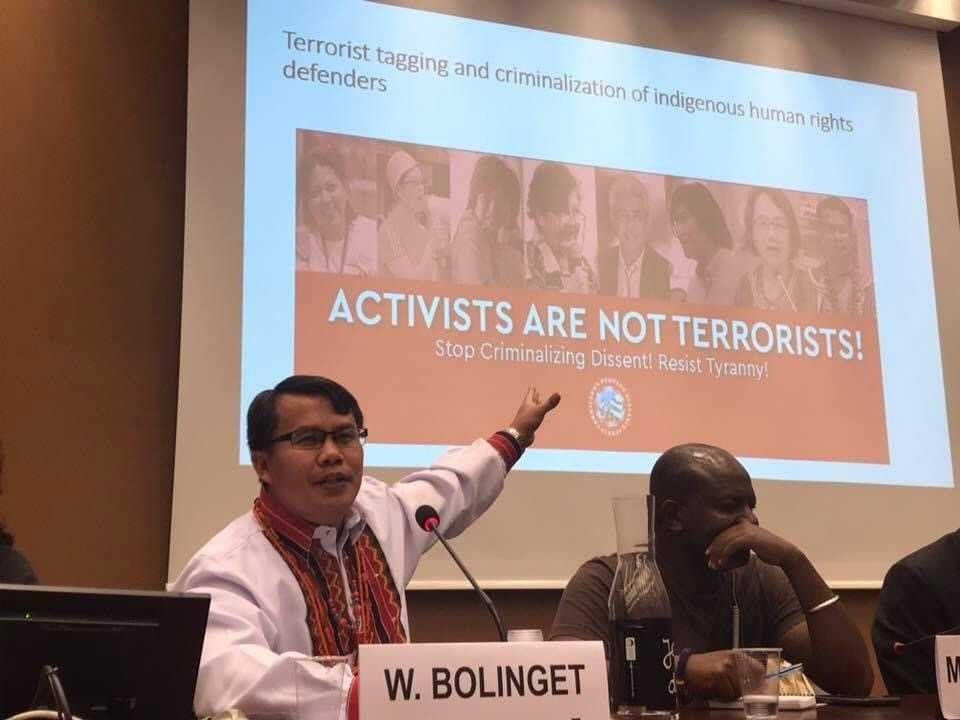 This undated photo shows Cordillera Peoples Alliance chairperson Windel Bolinget, whom the Cordillera police issued a ‘shoot-to-kill’ order on if he resists arrest on what groups said are based on trumped up charges.

MANILA, Philippines — Groups on Wednesday condemned the shoot-to-kill order given by the Cordillera police on an indigenous group leader who had been tagged in a murder case in 2018, urging authorities to recall the pronouncement which they fear could put his life in peril.

Windel Bolinget, who heads the Cordillera Peoples Alliance, was among nine others included in an arrest warrant issued by Judge Sharon Rose Saracin of the Tagum City Regional Trial Court in September 2020.

He had since said that he had never been in the place of the incident in 2018, and vowed to exhaust legal remedies to clear his name. Despite this, police in the region had been told to follow the order should he resist arrest, the same that President Rodrigo Duterte had told cops before.

In a statement, Sandugo, a movement of Moro and Indigenous Peoples for self-determination, called the order by Cordillera Police Regional Director R’win Pagkalinawan as “extremely unbecoming, even criminal” to deny Bolinget of proving his innocence.

“He (Bolinget) is not a murderer,” the group said. “He is an activist vocal on the government’s inefficiency to effectively respond to the pandemic..it is open season for the harassment and murder of leaders like Bolinget.”

In Congress, Rep. Carlos Isagani (Bayan Muna), said the Philippine National Police would have to answer should anything happen to Bolinget, his relatives and those close to him because of the shoot-to-kill order.

“The police and the AFP are now really riding roughshod trampling the rights of human rights defenders and the people in general,” he said. “The PNP should immediately revoke [this] against Windel, who is charged with clearly trumped up charges.”

The labor group Kilusang Mayo Uno said Bolinget has been a long-time IP activist who had opposed mining by foreign companies, logging and other cases involving their ancestral land.

“We stand that Bolinget is innocent,” said KMU’s Elmer Labog in a statement. “We demand the junking of the shoot-to-kill order..we demand the dropping of the bounty.”

Orders such as this had come originally come from Duterte, who in April 2020, told state forces to shoot dead those who would violate quarantine curbs and disrupt order amid the coronavirus pandemic.

By December, he would repeat this remark, saying he has no regard for human rights as is shown in his anti-drug war that has killed thousands and despite international criticism, would remain relentless according to him up until the end of his term.

The kind of language that the president has adopted in his four years in office has long been pointed out by critics and the human rights commission as something that encourages a culture within the police force that has often led to cases of brutality.

Christmas last year in the Philippines had been marred by the brutal shooting in broad daylight of a cop who was off duty in Tarlac.

The PNP and the administration have sought to deny that the such behavior is common in the police, painting it as an isolated incident despite the string of documented cases that cops had figured in 2020 alone.

Both the police leadership and the administration have also rejected calls for reforms in the law enforcement body, signaling that such cases resulting in abuse if not remedied, are most likely to continue. — with reports from Gaea Katreena Cabico and James Relativo

2021-01-19
AtinitoAdmin
Share
Previous Did Vice Ganda hit back at Harry Roque again?
Next Peso climbs as focus turns to US leadership change