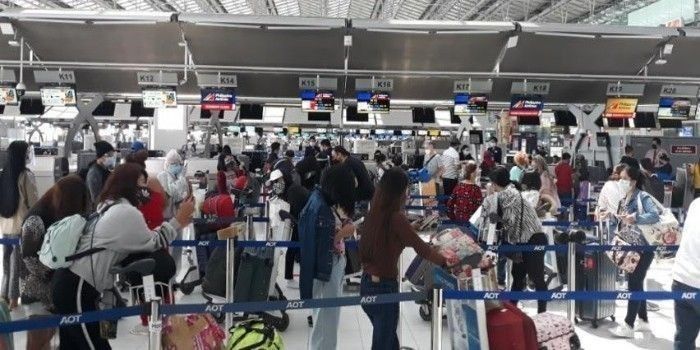 Travelers queuing for flight check-in at the Ninoy Aquino International Airport in August 2020.

MANILA, Philippines (Updated 9:19 p.m.) — Health authorities on Wednesday said the new variant of the coronavirus, believed to be more infectious, has reached the country from a Filipino who returned from the Middle East.

The health department said samples from a male Filipino who came from the United Arab Emirates yielded a positive result of the B.1.17. SARS-CoV-2

He left for Dubai on December 27 and arrived back in Manila on January 7, through the Emirates flight no. EK 332.

The Duterte administration had imposed travel restrictions from countries with confirmed cases of the new variant, but as of January 13, the UAE was not included in its list of over 30 nations.

By December 29, the UAE newspaper Gulf Times had reported that authorities over there had confirmed “a few cases” of the variant which was first detected in the United Kingdom and has since spread to other countries.

DOH said it now has the couple’s flight details to trace other passengers, but it has also told those in the said flight to seek help from their local community response teams or BHERT.

Officials added that the patient, who is a resident of Quezon City, was swabbed and quarantined at a hotel when he arrived.

Results of the test were found out a day later and he was referred to a quarantine facility in QC, while his samples were sent to the Philippine Genome Center for whole genome sequencing.

He had apparently traveled with his female partner who has tested negative, but remains under quarantine and monitoring.

They were said to have had no exposure to a COVID-19 patient before they left for Dubai and also had not traveled outside QC.

“Immediate contact tracing was done in close coordination with the QC government, and the initially identified contacts are asymptomatic and current under strict home quarantine,” the DOH said.

The agency has vowed to intensify its weekly genomic biosurveillance on incoming passengers, infections at home, those who were re-infected and those with reported clustering of cases.

It added that it has sought the interior department’s help for more contact tracers, including a separate one for possible cases of the new variant.

Despite the detection of the B117, there is no expected change in protocols in the country’s fight against the pandemic, as said by a senior health official earlier today.

Undersecretary Maria Rosario Vergeire sought to explain that the mode of transmission remains through droplets, and there would only be stricter monitoring of public’s compliance to health standards.

Vergeire was also recently tapped to lead a new technical working group formed by the coronavirus task force to monitor and identify new variants of the COVID-19.

As of January 13, entry of foreign travelers to the country are still restricted to those coming from the following areas:

President Rodrigo Duterte is expected to make his weekly address Wednesday night and the public would await what he would say on tonight’s developments.

2021-01-12
AtinitoAdmin
Share
Previous ‘Worrying’ number of tourists from outside B.C. prompts Whistler doctor to call for travel ban
Next Defence lawyer says police should not be using Quebec curfew as excuse to search personal property