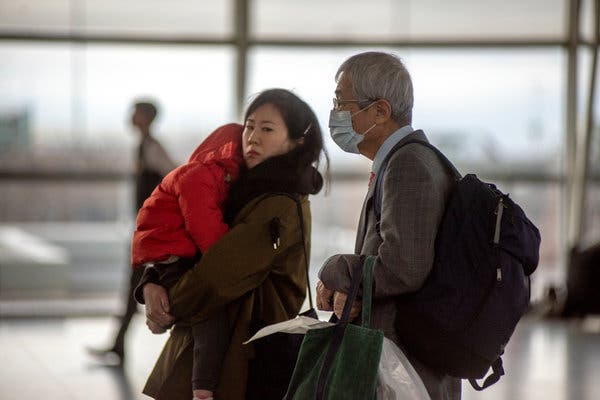 Jan. 31, 2020: President Donald Trump signed an order to temporarily bar entry to foreign nationals, other than immediate family of U.S. citizens, who has traveled in China within the past 14 days. (Photo NY Times)

On Jan. 31, 1865, the U.S. House of Representatives joined the Senate in passing the 13th Amendment to the United States Constitution abolishing slavery, sending it to states for ratification. (The amendment was adopted in December 1865.)

In 1863, during the Civil War, the First South Carolina Volunteers, an all-Black Union regiment composed of many escaped slaves, was mustered into federal service at Beaufort, South Carolina.

In 1929, revolutionary Leon Trotsky and his family were expelled from the Soviet Union.

In 1945, Pvt. Eddie Slovik, 24, became the first U.S. soldier since the Civil War to be executed for desertion as he was shot by an American firing squad in France.

In 1950, President Harry S. Truman announced he had ordered development of the hydrogen bomb.

In 1958, the United States entered the Space Age with its first successful launch of a satellite, Explorer 1, from Cape Canaveral.

In 1961, NASA launched Ham the Chimp aboard a Mercury-Redstone rocket from Cape Canaveral; Ham was recovered safely from the Atlantic Ocean following his 16 1/2-minute suborbital flight.

In 1971, astronauts Alan Shepard, Edgar Mitchell and Stuart Roosa blasted off aboard Apollo 14 on a mission to the moon.

In 2000, an Alaska Airlines MD-83 jet crashed into the Pacific Ocean off Port Hueneme (wy-NEE’-mee), California, killing all 88 people aboard.

In 2001, a Scottish court sitting in the Netherlands convicted one Libyan, acquitted a second, in the 1988 bombing of Pan Am Flight 103 over Lockerbie, Scotland. (Abdel Basset Ali al-Megrahi (AHB’-dehl BAH’-seht AH’-lee ahl-meh-GRAH’-hee) was given a life sentence, but was released after eight years on compassionate grounds by Scotland’s government. He died in 2012.)

Ten years ago: A federal judge in Florida declared the Obama administration’s health care overhaul unconstitutional, siding with 26 states that argued people cannot be required to buy health insurance. (In 2012 the Supreme Court would uphold most of the health care law, including the requirement that nearly every American have health insurance.) Egypt’s military promised not to fire on peaceful protests and recognized “the legitimacy of the people’s demands.”

Five years ago: A triple bombing killed at least 45 people in a predominantly Shiite Muslim suburb south of the Syrian capital. Israel’s Cabinet voted to allow non-Orthodox Jewish prayer at the Western Wall in Jerusalem, marking a historic show of support for liberal streams of Judaism. Novak Djokovic maintained his perfect streak in six Australian Open finals with a 6-1, 7-5, 7-6 (3) victory over Andy Murray.

One year ago: The United States declared a public health emergency over the new coronavirus, and President Donald Trump signed an order to temporarily bar entry to foreign nationals, other than immediate family of U.S. citizens, who had traveled in China within the past 14 days. Three U.S. airlines suspended all flights between the U.S. and China. The U.S. government ordered two weeks of quarantine at a California military base for the nearly 200 Americans who’d been evacuated on a charter flight from the Chinese city of Wuhan. The Senate narrowly rejected Democratic demands to summon witnesses for President Donald Trump’s impeachment trial. Britain formally left the European Union after 47 years of membership. Author Mary Higgins Clark, known as the “Queen of Suspense,” died in Florida at the age of 92. The Food and Drug Administration approved the first treatment for children with peanut allergies.