Home / Around Canada / In the shadow of her killer’s verdict, Cindy Gladue’s family wants to reclaim her humanity

While waiting for the verdict in her killer’s second trial, Cindy Gladue’s family in Edmonton gathered to remember the Cree-Métis woman as more than the victim of a horrific death.

Gladue, McLeod’s oldest daughter, was found dead in 2011 in an Edmonton hotel room that has since changed its name.

“Never dreamed about that girl. Don’t dream of her, never ever, since she passed away,” said McLeod, 63, a fire-glow on her cheeks. “I’ve had Elders tell me that when this is all over, I will probably start dreaming about her.”

McLeod did not watch the fire alone. Sitting in the backyard belonging to her niece Prairie Adaoui, McLeod was surrounded by family, including Gladue’s two daughters, Brandy, 21, and Cheyanne, 19, and their two children, eight-month-old Dayton and nine-month-old Maliya.

They were all waiting for a jury to decide what type of justice Gladue deserved. They didn’t know that roughly 22 hours later, the jury would return a guilty verdict against her killer.

McLeod knows this particular type of waiting — waiting for an answer from a group of strangers sequestered in a courthouse with no deadline except the final verdict. In this in-between space, even hope is a hard thing to holdon towhen you know what it feels like to have it shattered.

McLeod was in this purgatory in 2015. At that time, a verdict came back not guilty on first-degree murder and manslaughter charges against Bradley Barton, the Mississauga, Ont., trucker who let the 36-year-old Gladue bleed to death in the bathtub of his hotel room after a violent sexual encounter.

For the past 10 years, through one trial, two appeals and then a second trial, each accompanied by the drumbeat of headlines, Gladue’s family has lived her death over and over again.

But the darkness, trauma and substance dependency that led Gladue to hotel room 139 on a pair of nights in June 2011 are just the last pages of her story.

The family feels that by reducing Gladue to a single night, a single horrific act, the media coverage has obscured the fullness of her humanity — as a Cree-Métis daughter, sister, niece, mother and grandmother who loved to cook and sing and dance with her cousins until midnight to the song The Locomotion.

That’s what brought them together last Thursday, to begin healing, to draw out the real Cindy Gladue, in all three dimensions — while they waited.

‘I really loved her’

Earlier in the evening, after a meal of KFC, they gathered in Adaoui’s living room for a sharing circle.

As a stone passed from hand to hand, a portrait of Gladue emerged through fragments of memory and the last words spoken. Cheyanne, Gladue’s youngest daughter, described a specific afternoon.

“I think I was in Grade 2 or 3. I walked in the door and then I saw my mom on the couch with her big bun,” said Cheyanne, who is expecting another child.

“And then I sat beside her, watching her cooking show, like she always was. And then I just snuggled up beside her…and she would sit there and talk …That’s something I will always remember.” 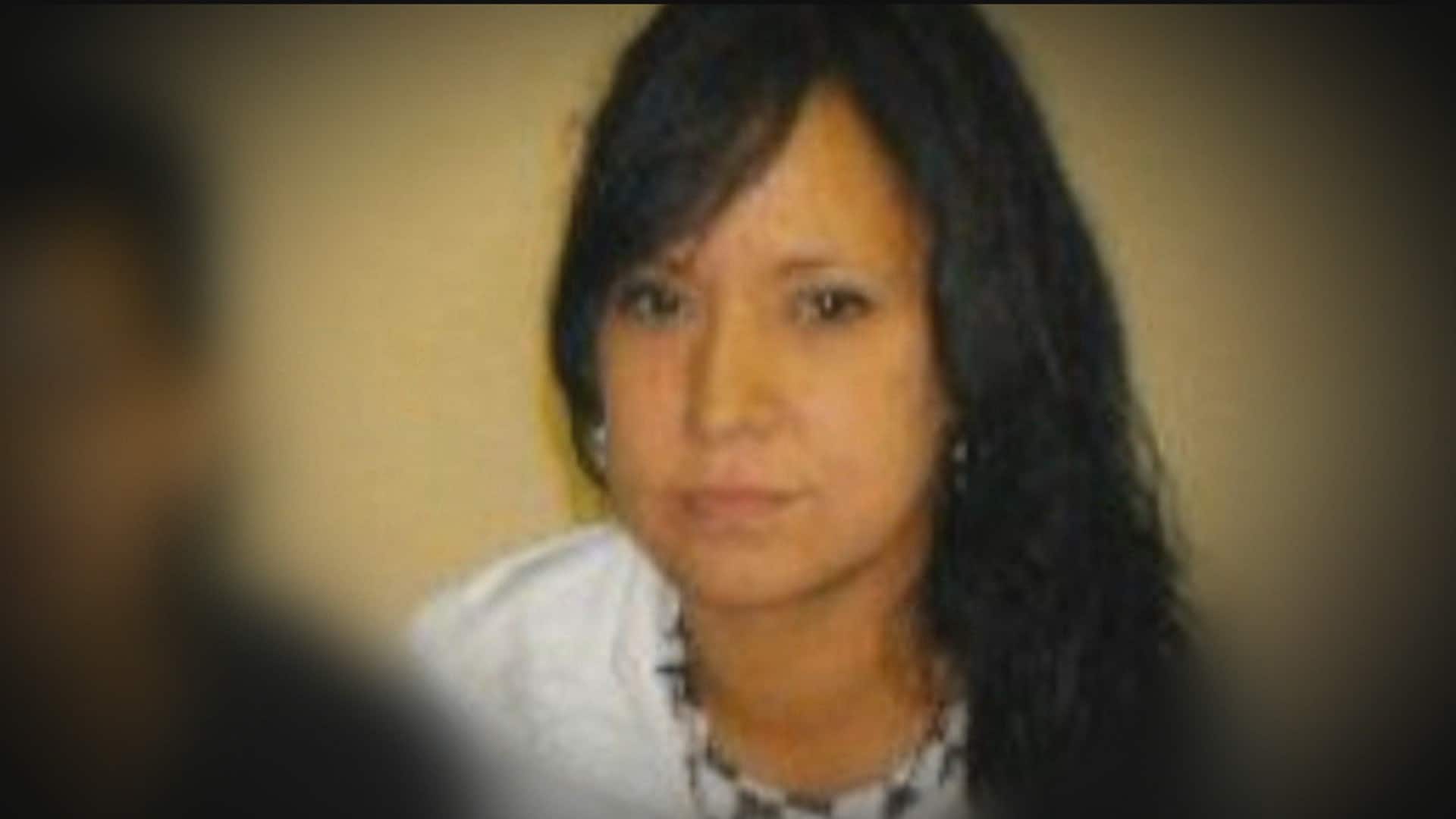 The family of Cindy Gladue spoke to CBC’s Jorge Barrera after the man accused of fatally injuring her inside a west Edmonton hotel suite nearly 10 years ago was found guilty of manslaughter.

When the stone was in Adaoui’s hand, she said the evening was about beginning the process of healing for the family and reclaiming Gladue from the distorted images presented in the courtroom and news reports.

“I wanted to just make sure that we honour your mom and your daughter, or your niece, your cousin. I say that because people said so many awful things, but people don’t really know the story,” said Adaoui, 41.

She then addressed Gladue’s daughters directly.

“Your mom was a big influence in my life. She was a little bit older, but she always babysat me, and I really loved her.”

‘She was a great woman’

With stone in hand, Marina Dustyhorn-Gambler, Dustyhorn and Adaoui’s mother, said she knew Gladue from the time she was a little girl.

“And when she grew up to be an adult, she had her babies. One New Year’s Eve, I came to visit with them … Donna [McLeod] and the girls, we had fun dancing and we had a good time,” said Dustyhorn-Gambler.

She turned to the room and said, ‘I’ll show you how to do the twist,” and everyone burst into laughter.

Dustyhorn-Gambler then turned sombre.”That was the last New Year’s that I spent with Cindy. Never thought I’d never meet her again. Yeah, that’s the excitement I had with her. She was a great woman.”

McLeod said she furnished it for her. This is where Gladue had her first child, Brianne, who is now 23 and lives in Toronto with two children of her own, aged five and one.

Then McLeod spoke about her last words to Gladue.

“[Cindy] always made sure that I eat breakfast, because I don’t eat breakfast. And one day she had an appointment and she goes, ‘Mom, I don’t have time to cook for you.’ And the way I worded it … was, ‘Well, Cindy, who is going to cook for me when you’re gone?’ I didn’t know that was going to be the last time.”

Emotion halted and gripped McLeod’s voice. “I miss her so much. Why did this happen to her?”

McLeod still stores mementos of her daughter’s childhood. There is a photograph of Gladue as a small child in one of the many albums McLeod keeps. Gladue sits cross-legged on the floor against a white wall. She is hugging a doll with both arms tightly to her chest.

McLeod also has the ribbons from the Northland School Division, No. 61, that Gladue won during sporting events. There is the certificate of merit she received a month before her 14th birthday, while attending St. Francis of Assisi School, for her prowess in physical education. McLeod also kept the “Operators License” Gladue got for using a sewing machine, along with a babysitting certificate, both of which she received at St. Nicholas School when she was 12.

Gladue was an athlete, she could mend, create and wanted to care for children.

McLeod witnessed the first trial by herself. “I was in court by myself, alone sitting in there,” she said.

She saw her daughter turned into a caricature as the Crown, defence lawyers and various witnesses repeatedly referred to Gladue not by name but as the “Native” lady, woman or girl, and as a “prostitute.”

The circumstances of that night in 2011 were the result of a $60 sexual transaction, set up by a former boyfriend, to feed a substance abuse habit and survive. During court testimony, this came to define Gladue.

The defence used the label of prostitute to suggest it absolved the actions of Bradley Barton, who repeatedly lied about the circumstances of Gladue’s death, according to court testimony.

McLeod saw her daughter reduced to exhibits of grainy security video, two-dimensional images of blood and tissue, her painful death slowed down, described in detail, dissected.

Gladue’s pelvis was brought into the courtroom as evidence — a first in Canadian legal history — and the image was live-streamed from an adjacent room so jurors could watch Alberta’s then-chief medical examiner explain how the 11-centimetre cut along the inner wall of her vagina was likely caused by a blade.

“Why would a court ever allow such a display of disrespect and degradation to occur to a victim’s body?” wrote Indigenous lawyer Crista Big Canoe in a CBC News opinion piece published at the time. “Instead of using other tools and alternatives, Cindy’s vagina was used as a demonstration tool. This is both offensive and re-victimizing.”

It was one of several blunders Crown lawyer Carrie-Ann Downey committed in that first trial. No murder weapon was ever recovered, and the blade theory was tossed by the Crown prosecutors who handled the second trial.

It wasn’t, in fact, a cut. Evidence in the second trial showed it was a rip caused by the size and force of Barton’s hand.

Computer forensic evidence gathered by Edmonton police and presented in the second trial revealed that nine days before Gladue’s death, Barton, a bankrupt, heavy-smoking father of twin boys, searched the internet for violent pornography depicting the act that ultimately killed her.

The visibly white jury at the first trial was never presented with this.

The defence “painted [Cindy] so wrong and … [with] an ugly brush,” said Adaoui. “That’s not who she really was.”

“Implied consent” was at the core of the defence’s arguments — Barton believed he could do what he wanted because he had paid Gladue $60. But there is no such thing as “implied consent” in Canadian law.

The Supreme Court ordered a new manslaughter trial for Barton, which began in January. This time, Court of Queen’s Bench Justice Stephen Hillier told the jury from the outset that determining Gladue’s consent was at the core of the final verdict.

This past Thursday evening, after more than a month of testimony, the jury began deliberations.

On Friday, shortly before 6 p.m., Gladue’s family received a call: After nine hours, the jury was ready to deliver the verdict.

McLeod, with Dustyhorn-Gambler in the passenger’s seat, drove her van to the court.

“Nervous, nervous,” said McLeod, after the walk up 102A Ave. NW, around the building and through the other entrance on 99 St NW. Then, after heading through the doors and security’s metal-detector wand, they went to the elevator and pressed B2 — on their way to basement courtroom B201.

At least five courthouse sheriff officers stood in various spots throughout the courtroom, tightened security against any potential threats. A group of women sat around McLeod throughout the week’s closing arguments and jury instruction.

Eyes closed, Adaoui’s arms around her shoulders, McLeod lowered her head and cried behind her black cloth mask, which featured a red handprint, an iconic symbol of the Missing and Murdered Indigenous Women and Girls movement.

Through the plexiglass, a court sheriff prepared to take Barton into custody.

Afterwards, McLeod walked out into a new evening — the usual sub –20 C temperatures in Edmonton had risen several degrees that day.

“How many years for this?” said McLeod, on her way back to her van.

Gladue “was a daughter, she was a mom, you know? A grandmother,” McLeod said. “Now it’s over.”

With files from Madeline McNair

Jorge Barrera is a Caracas-born, award-winning journalist who has worked across the country and internationally. He works for CBC’s Indigenous unit based out of Ottawa. Follow him on Twitter @JorgeBarrera or email him jorge.barrera@cbc.ca.

Who opens a new tourist attraction during a pandemic? Meet Canada’s most-optimistic entrepreneurs