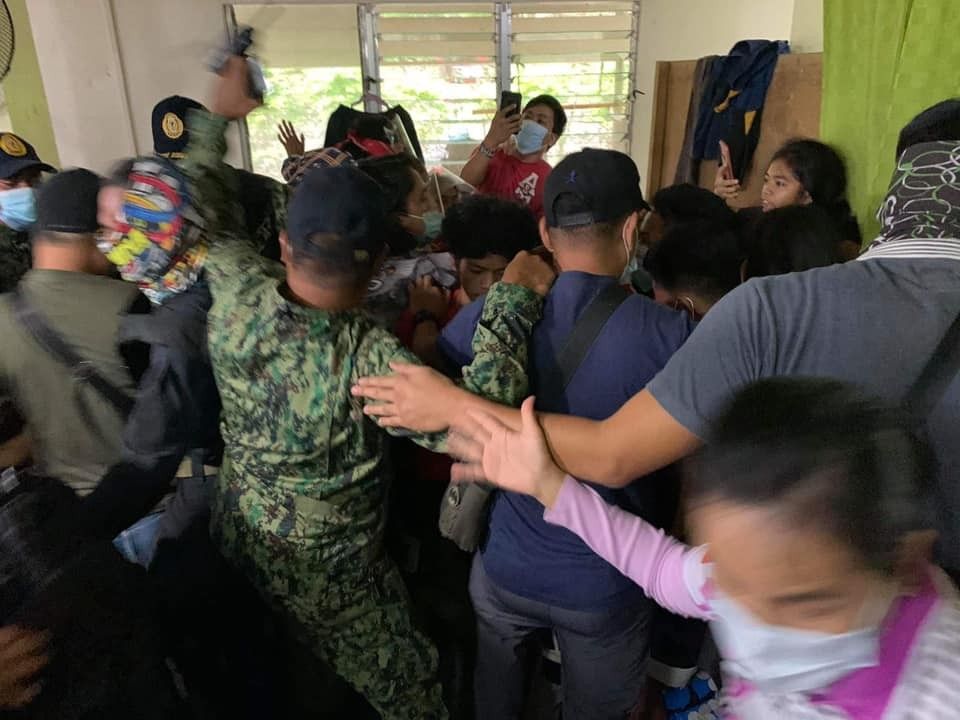 Photo shows personnel of Police Regional Office-7 swarming students of a Lumad school in Cebu at what they claim is a “rescue operation.”

MANILA, Philippines — One of the volunteer teachers at the Lumad Bakwit school arrested in a raid in Cebu City earlier this month was taken away from her holding cell Sunday without the consent of her family or legal counsel, a party-list representative said.

Rep. Sarah Elago (Kabataan Party-List) said this in a video statement posted by the College Editors Guild of the Philippines.

Related Stories
For Lumad schools, even holding class is a struggle
‘Rescued’ Lumad children said they were taught reading and writing, not ‘warfare training’ — Cebu DSWS
Raps filed vs 7 arrested in raid on Lumad Bakwit School in Cebu

Elago added that the teacher was brought to Camp Sergio Osmeña Sr., the Police Regional Office-7 headquarters in Cebu City, upon orders from Police Gen. Debold Sinas, the chief of the Philippine National Police and who was previously a regional director of PRO-7.

To recall, operatives of the PNP Women and Children Protection Center along with social workers under the Cebu City Department of Social Welfare Services apprehended 21 students and teachers after conducting on Monday, February 15 what they say is a “rescue operation” for 19 Lumad minors.

The operation took place without coordination with the University of San Carlos, where the Lumad school was being hosted.

Roshelle Porcadilla was among the seven teachers and IP elders arrested at the raid, which police leadership continues to call a “rescue operation” despite statements from the University of San Carlos itself saying no rescue was needed. The university said the students were being “nurtured, cared for, and treated with their best interest in mind” at the USC’s Retreat House.

BREAKING: @KabataanPL Rep. Sarah Jane Elago, who is in Cebu to assist the Lumad children after the illegal arrest of police, announced that Lumad teacher Roshelle Porcadilla was taken without the knowledge of her counsel and families at around 9 a.m. at Cebu City Police Office. pic.twitter.com/fgCwsCdP73

The seven face charges of kidnapping, child exploitation, and human trafficking filed by the police.

“We were told that PNP chief Sinas sent for her. Not even her lawyers and friends were informed. We came here to ensure her safety,” the lawmaker said in Filipino.

It was also Sinas who claimed that the students of the school were being indoctrinated to be “child warriors” and made to undergo “warfare training”, a claim disputed by Cebu City social workers who interviewed the children after the police operation.

Instead, the children talked about being taught writing modules on reading and writing, doing zumba, and tasking for housework.

None of the social workers were told by police operatives who spearheaded the operation that they would be dealing with children who were allegedly kidnapped and trafficked.

Reports by the Save our School Network-Cebu said that Porcadilla was already detained separately from the other six arrested at the holding facility. The six other detainees are males.

In the days leading up to her transfer, she was also kept from receiving visitors by the police guarding her with “heightened police presence around her holding area.”

According to SOS, personnel of the Cebu City Police Station also denied accountability over where the teacher-volunteer would be brought because, they said, they were only designated as a “holding area.”

The CCPO has said they are not accountable for where Teacher Roshelle will be brought because they are only the holding area.#FreeBakwitSchool7#FreeLumad26#AbolishNTFELCAC

The PNP has a documented history of red-tagging activist groups and indigenous peoples’ rights advocates.

Lawmakers in the House of Representatives have since called for a congressional probe into the incident.

Others have also demanded that the police officers involved in the so-called rescue operation be sacked from their posts.

2021-02-27
AtinitoAdmin
Share
Previous Donated Sinovac doses arrive in the Philippines
Next Trudeau says Canada-U.S. relations need to rebuild. Just how bad did it get with Trump?