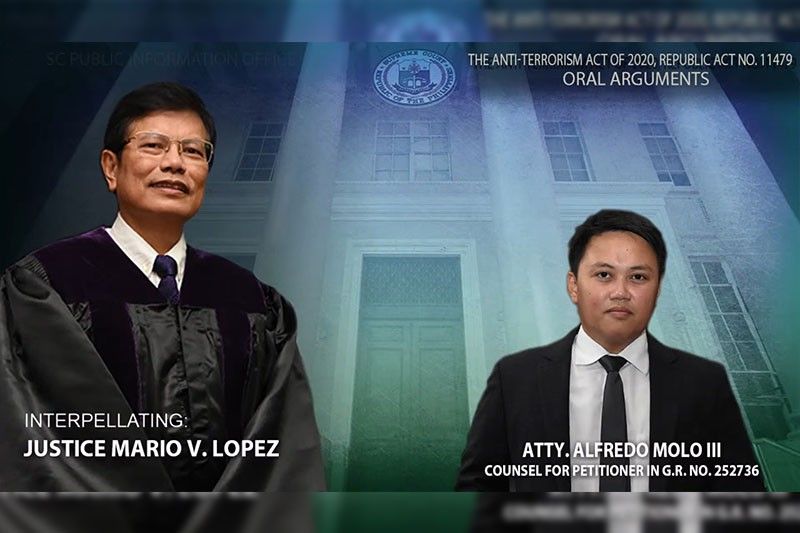 MANILA, Philippines — Petitioners have come to the Supreme Court to assail the anti-terrorism law that they said infringe on the people’s freedom of expression, among other rights, but a magistrate asked: How about the State’s interest?

In the resumption of the oral arguments on the Anti-Terrorism Act petitions on Tuesday, Associate Justice Mario Lopez asked University of the Philippines Constitutional law professor John Molo this.

Facial challenges, or a petition contending the the law is unconstitutional on its face, were mounted in the 2014 case of Imbong vs Ochoa on the Reproductive Health law and in the landmark 2014 case of Disini vs Secretary of Justice on the Cybercrime Prevention Act.

In the Imbong case, Lopez said that since falsification is involved, it would fall under crimes against public interest and if it involves abortion, than it would be crime against a person.

“So you are saying that [Imbong] and Disini, these cases are applicable to the Anti-Terrorism Act? The void for vagueness rule, because if involves freedom of expression?” Lopez asked.

Molo added: The ATA covers the fundamental rights of the people too.

In the separate interpellation of Justice Samuel Gaerlan of UP Criminal law professor Theodore Te, the former asked whether he would place freedom of expression above the freedom to peace, safety and security.

As the tense interpellation of Lopez continued, the justice pressed Molo: What is the nature of the crime involved in anti-terrorism law?

But Molo raised that when compelling state interest is involved, narrow tailoring should be considered. This is part of the strict scrutiny test, which applies when the challenged law results in “suspect classification.”

“To pass strict scrutiny, the government must actively show that the classification established in the law is justified by a compelling governmental interest and the means chosen by the State to effectuate its purpose must be narrowly tailored to the achievement of that goal,” former Chief Justice Teresita Leonardo-De Castro’s Separate Opinion in Garcia vs Drilon read.

But Lopez pushed that there is national state security involved in the ATA, and there may be a “higher level of scrutiny more than strict scrutiny test.”

Molo stressed that under strict scrutiny, the state is put under test especially when it chose unconstitutional means. He tried to elaborate but Lopez cut him and just told him that he would be given a chance to rebut.

Not, as it turned out, in the oral arguments, but in a written memorandum they will file after the debates.

“Professor, dakdak ka naman nang dakdak (you keep on chattering), mamaya in-anticipate mo na naman lahat ng sinasabi ko eh (you’re trying to anticipate what I’ll say). If you disgharee, I will give you a chance and this is your chance after I have said everything. File your memorandum to that effect after the solicitor general said his piece. Hindi tayo matatapos (We will not finish) if I let you talk and talk. Tama? Thank you, professor,” the justice said.

(That’s the only thing that I want to say, the point of justices. We are trying to understand you, then you must also give us our understanding. So, however, you understand the law, we cannot take those things here in the oral arguments because we have a limited time.)

The oral arguments wrapped up past 6 p.m., after more than four hours of interpellation of the petitioners. Lopez took nearly an hour of Tuesday’s session.

Meanwhile, recaps of the four days of the oral arguments may be read here, here, here and here.