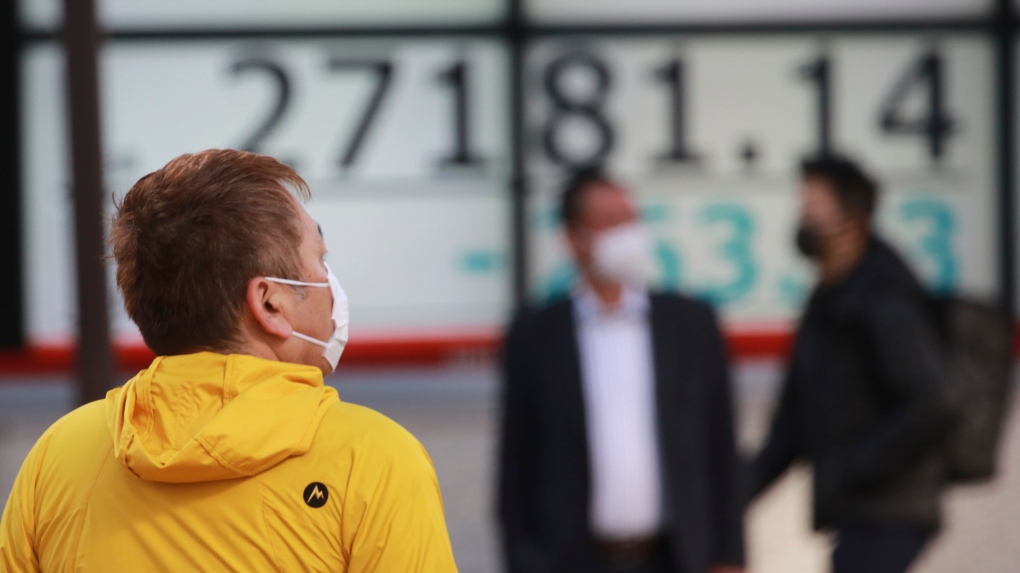 People walk by an electronic stock board of a securities firm in Tokyo, Monday, Jan. 4, 2021. (AP Photo/Koji Sasahara)

Overnight, Wall Street gave up most of the previous day’s gains as technology, industrial and bank stocks fell.

Investor confidence was shaken after Germany, Europe’s biggest economy, and the Netherlands extended lockdowns and imposed new travel and business curbs in response to spikes in infection.

The World Health Organization said the weekly global death toll from the virus is rising again following six weeks of declines. It said the number of new reported cases rose in four of six global regions.

"Investors were left scrambling for life jackets, as it seems we are back navigating the stormy sea of the coronavirus pandemic," said Stephen Innes of Axi in a report.

In Europe, Germany extended anti-virus restrictions by three weeks to April 18 and said travellers arriving from abroad by air must be tested for the coronavirus before boarding their flight. The Netherlands extended its lockdown by three weeks.

That followed similar moves earlier by Italy and France.

Investors are wavering between optimism about coronavirus vaccines that might allow business and travel to return to normal and concern about the pace of recovery.

Traders also are watching the potential for inflation pressures to pick up after struggling economies were flooded with credit and government spending. That has depressed U.S. bond prices, prompting some to shift money out of stocks.

Bond yields, or the difference between the market price and the payout at maturity, narrowed as prices rose. The yield of the 10-year Treasury note fell to 1.63%, down from last week’s level above 1.70%.

That weighed on banks and other financial companies which look to yields as a benchmark for the interest rates they charge on mortgages and other loans. Bank of America fell 2.0% and Wells Fargo dropped 1.9%. American Express slid 2.8%.

In energy markets, benchmark U.S. crude rose 33 cents to US$58.09 per barrel in electronic trading on the New York Mercantile Exchange. The contract plunged $3.79 on Tuesday to $57.76 after Germany’s lockdown announcement triggered concern demand for industry and travel would decline.

TORONTO — The Canadian dollar strengthened against its U.S. counterpart in Asian trading on Tuesday …