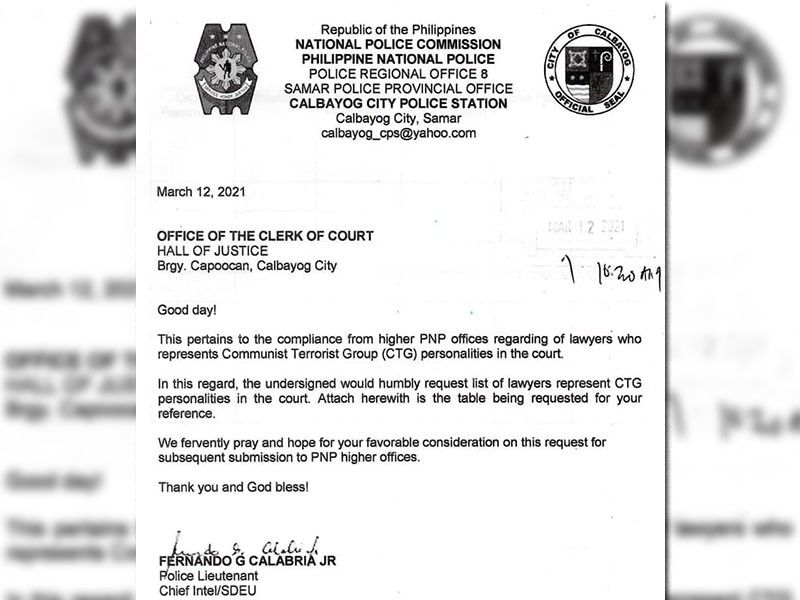 In a statement to reporters, PNP officer-in-charge, Police Lt. Gen. Guillermo Eleazar said he ordered "the relief of [Police Lt. Fernando] Calabria as the Chief of the Intelligence Unit of the Calbayog City Police Station."

An attachment of the letter sent by Calabria to the court supposedly shows a table to be filled out on “legal personality, affiliations, client [Communist Terrorist Group] personality, mode of neutralization, case filed, status.” He also noted in the letter that the request is in compliance “from higher PNP offices.”

But Eleazar said there was no such order from the PNP top brass to write the court and added that it would "never tolerate such unprofessional method of information-gathering."

The PNP OIC said an initial probe which he ordered found that "what PLt Calabria did was part of his effort to come up with a comprehensive report on the communist insurgency situation in his area of responsibility, which is Calbayog City."

"The pressure of crafting a detailed report apparently took a toll on him and eventually prompted him to commit a serious breach of policy."

Eleazar added that the PNP is confirming whether similar actions were taken by police elsewhere.

He added that he "fully understands" the outrage from members of the legal profession over the letter, which has been slammed as an attempt to collate a "hit list" of lawyers.

"I, on behalf of the men and women of the Philippine National Police, sincerely apologize for this reckless behavior," he said.

"Our apology comes with an assurance to the judiciary and the members of the legal community that it is not and will never be the policy of the Philippine National Police to run after or even inflict harm on lawyers and members of the judiciary while performing their sworn duty."

"While we in the PNP remain steadfast in the campaign against communist insurgency, we will not condone any irresponsible and unprofessional act of any of our men in accomplishing that goal."

In response to this news, the National Union of People's Lawyers said that the steps undertaken by the PNP are still "not enough" to undo the harm caused.

"The relief of the intelligence man a while ago does not fully answer why these things and mindset pervade our supposed protectors," NUPL President Edre Olalia said.

"What is needed is a credible and independent inquiry on this and a categorical declaration from government that this is wrong on many scores."

For Olalia, all legal remedies should be on the table as the move undetaken by Calabria "puts every lawyer at risk."

Lawyer Chel Diokno, founding dean of De La Salle University’s College of Law, later Saturday called on the PNP to "make an official commitment that they will not target, profile and consider lawyers combatants."

A generic apology is not enough. Those involved must own up to their mistake, be held accountable, and explain the term “modes of neutralization" in the letter’s attachment. PNP must make an official commitment that they will not target, profile, and consider lawyers combatants. [https://t.co/mhuVFjI86H](https://t.co/mhuVFjI86H)

"A generic apology is not enough. Those involved must own up to their mistake, be held accountable, and explain the term 'modes of neutralization' in the letter’s attachment," he said on Twitter.

Diokno also called on the Supreme Court to order lower courts not to entertain any similar requests from police and to report any further harassment of members of the legal profession.

"To date, 61 lawyers, prosecutors, and judges have been killed since 2016. We are talking about the lives and safety of officers of the court."

— with reports from Franco Luna and Kristine Joy Patag