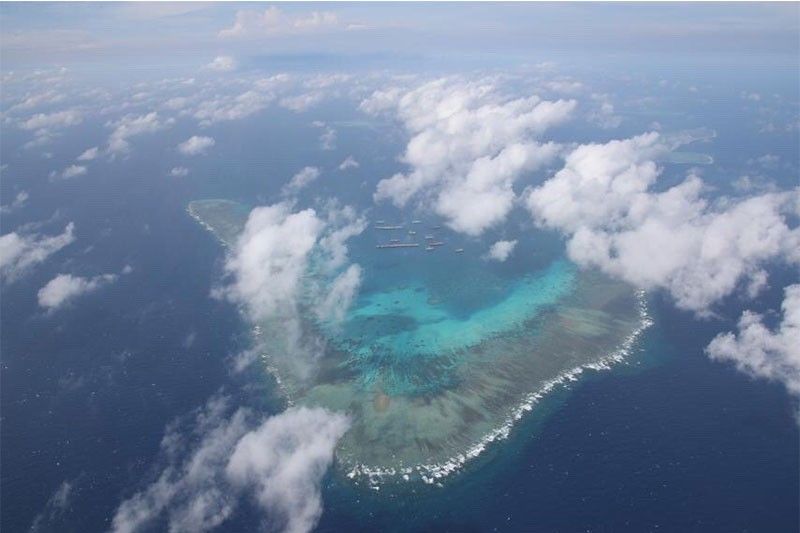 Manila filed a diplomatic protest on Sunday night after the National Task Force on the West Philippine Sea sounded the alarm over 220 Chinese ships seen moored within the vicinity of the reef on March 7.

The Julian Felipe Reef is about 175 nautical miles from Bataraza, Palawan — well within the Philippines’ exclusive economic zone (EEZ).

The Armed Forces of the Philippines, as of March 25, said there are still 183 Chinese vessels near the reef. AFP also said that its chief, Gen. Cirilito Sobejana, “ordered the deployment of additional Navy ships to beef up the conduct maritime sovereignty patrols in the WPS.”

All throughout this week, envoys have taken to Twitter to air their concerns over heightened tension in the South China Sea, earning China’s ire by showing their support for the Philippines and rule of law in the critical waterway.

“The US stands with our ally, the Philippines, regarding concerns about the gathering of [People’s Republic of China] maritime militia vessels near Whitsun Reef,” US State Department spokesperson Ned Price said on March 23.

“We call on Beijing to stop using its maritime militia to intimidate and provoke others, which undermines peace and security.”

After the Philippines filed a separate diplomatic protest over China’s coast guard law in January, the US was quick to reaffirm its commitment to the Mutual Defense Treaty and its rejection of Beijing’s excessive claims in the South China Sea.

The US is a former colonizer and longtime ally of the Philippines.

High Representative of the EU for Foreign Affairs and Security Policy Josep Borrell Fontelles said China’s actions represent “a serious threat to the peaceful development of the region,” per a quote posted by Luc Vernon, EU’s envoy to the Philippines.

“We cannot allow countries to unilaterally undermine international law and maritime security in the #SouthChinaSea,” Vernon also quoted Fontelles as saying on March 25.

“Australia supports an #IndoPacific region which is secure open and inclusive,” its envoy to the Philippines Steven Robinson said on March 24.

“The South China Sea – a crucial international waterway – is governed by international rules and norms, particularly UNCLOS. We remain concerned about destabilizing actions that could provoke escalation.”

Australia last year formally rejected Beijing’s expansive claims in the South China Sea, including those covering the West Philippine Sea, which is the part of the waterway that falls under Manila’s exclusive economic zone.

“Japan strongly opposes any action that heightens tensions,” its ambassador to the Philippines Kazuhiko Koshikawa said on March 23. “We support the enforcement of #RuleOfLaw in the sea & work with the int’l community to protect the free, open, and peaceful seas.”

Japan and China are also wrapped up in a territorial dispute over eight islands in the East China Sea.

United Kingdom Miniter of State for Asia Nigel Adams on March 23 said he spoke to Foreign Affairs Secretary Teodoro Locsin Jr. about their shared concern for the South China Sea and “actions which raise tensions there.”

“Canada opposes recent Chinese actions in the South China Sea, including off the coast of the Philippines,” its envoy to Manila Peter MacArthur said on March 25.

The Department of Foreign Affairs said New Zealand on March 23 “echoed calls for adherence to the rule of law… the exercise of self-restraint, resolution of disputes by peaceful means, and undertaking cooperative activities to build trust and confidence.”

“The Philippines also expressed appreciation for New Zealand’s support of the 2016 Arbitral Award, which is now an enduring part of international law,” DFA added.

China tweets up a storm

On March 23, Beijing renewed its criticism of Washington, accusing the superpower of inserting itself into disputes in the South China Sea and “provoking confrontation in the region [that] will only serve the selfish interests of individual country and undermine the regional peace and stability.”

The following day, it said Japan was “playing fusty geopolitical games” and “inviting the wolf into the house, betraying the collective interests of the whole region,” by pledging to work with the international community in supporting the rule of law in the sea.

“It is a pity that some Asian country, which has disputes with China in the East China Sea and is driven by the selfish aim to check China’s revitalization, willingly stoops to acting as a strategic vassal of the US,” Beijing said.

China on March 25 also said diplomats from the UK, Australia and Canada do not “understand the basic facts, nor do they have the ability to think and judge independently,” but “came out with irresponsible comments, using the same scripts.”

China insists that the hundreds of ships swarming Julian Felipe Reef were only “taking shelter” in the area and that no maritime militia was involved.

But satellite images released by US-based Simularity showed that a large number of Chinese ships have been “mooring, arriving and departing” at the coral reef since mid-December last year and that Beijing has been constructing on Subi Reef since November 2020.

— with reports from Patricia Lourdes Viray

Gordon sees no wrong with giving PDAF to PRC

Duterte limits use of face shields to ‘closed, crowded’ areas

Ontario’s vaccine passport: What you need to know