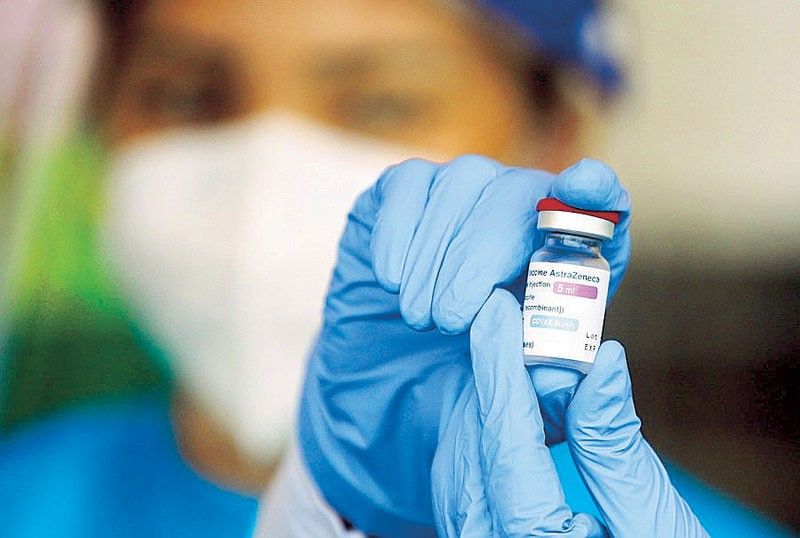 MANILA, Philippines — Another 38,400 doses of AstraZeneca COVID-19 vaccines arrived at the Ninoy Aquino International Airport (NAIA) Terminal 3 at past 7 p.m. yesterday on a commercial flight of KLM Royal Dutch Airlines from Amsterdam, bringing the brand’s total doses in the Philippines to 525,600.

Vaccine czar Carlito Galvez Jr., testing czar Vince Dizon and other government officials attended the turnover of the vaccines after they were processed and cleared for release by the Bureau of Customs at the NAIA through the advance documents and clearances presented by Department of Health (DOH) and Food and Drug Administration (FDA) representatives.

At present, the country has a total of 1,125,600 million doses of COVID-19 vaccines courtesy of China’s Sinovac and the COVAX Facility’s AstraZeneca.

The Philippines is expected to receive over 40 million doses of COVID-19 vaccines from the United States and the United Kingdom this year.

About 13 million doses of vaccines from US biotechnology company Moderna are also expected to arrive in the country by the end of May or early June. Some 117,000 doses are expected from Pfizer.

American company Johnson and Johnson has also allocated six million of its COVID-19 vaccine to the Philippines, according to reports.

Over 1 million Sinovac doses this month

More than a million doses of Sinovac’s COVID-19 vaccine will arrive in the country this month, according to Galvez.

“We have procured one million (doses) that will arrive on March 21,” Galvez said during the vaccination rites at Qualimed Hospital in Sta. Rosa, Laguna yesterday.

The facility began inoculating its health workers against COVID-19, making it the first hospital outside Metro Manila to receive AstraZeneca vaccines.

Dr. Edwin Mercado, vice chairman of the Qualimed Hospital network, received the first shot during vaccination rites. All 378 staff members were said to be willing to get vaccinated with any vaccine, according to Ayala Healthcare Holdings Inc.

Aside from one procurement for March 21, Galvez said the Chinese government has agreed to donate 400,000 Sinovac doses that will arrive this month.

The Philippines received 600,000 doses of the China-made jabs on Feb. 28 for its first legal vaccine rollout this month. Galvez had earlier said the government hopes to deploy all of these vaccines to hospitals nationwide by the end of the month’s first week, with 100 hospitals having already received an initial supply of shots.

American biotechnology company Moderna will soon supply over 13 million doses of its COVID-19 vaccine to the Philippines following the conclusion of the supply agreement, the Philippine embassy in Washington said yesterday.

A separate agreement with the Philippine government and the private sector for the supply of another seven million doses will be finalized.

Moderna said the 13 million doses will arrive in the country by the third quarter of this year.

“We thank the government and the private sector for their collaboration to bring the Covid-19 Vaccine Moderna to the Philippines,” Stéphane Bancel, chief executive officer of Moderna, said in a statement.

“We appreciate the confidence in Moderna and our mRNA platform demonstrated by the Government of the Philippines. We remain committed to making our vaccine available on every continent to help end this global pandemic.”

Meanwhile, Austrian authorities have suspended inoculations with a batch of AstraZeneca’s COVID-19 vaccine as a precaution while investigating the death of one person and the illness of another after the shots, a health agency said yesterday.

“The Federal Office for Safety in Health Care has received two reports in a temporal connection with a vaccination from the same batch of the AstraZeneca vaccine in the district clinic of Zwettl” in Lower Austria province, the agency said.