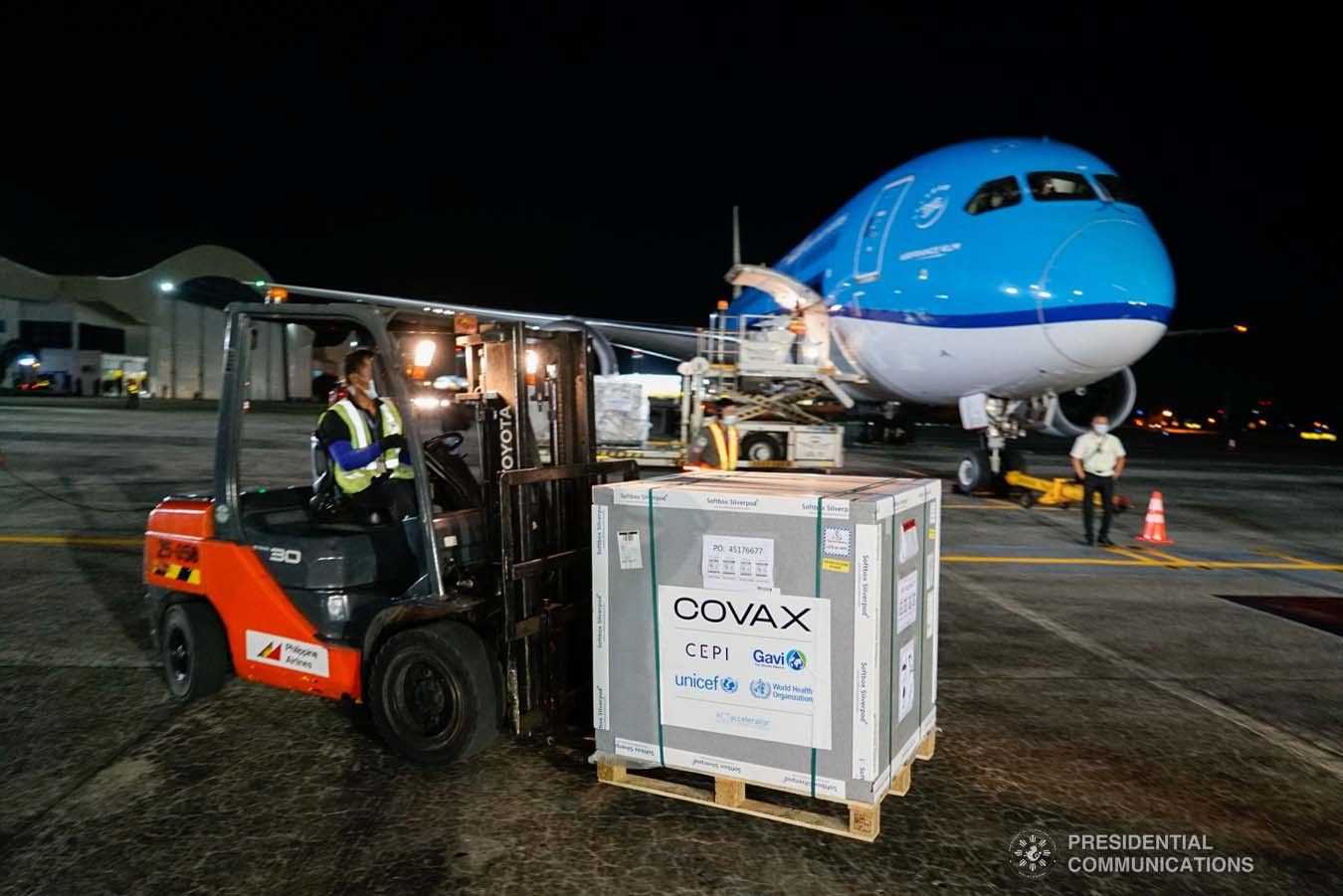 Workers carefully unload the crates containing the doses of the COVID-19 vaccine developed by British-Swedish drugmaker AstraZeneca at the Bulwagang Kalayaan in Villamor Air Base, Pasay City on March 4, 2021.

Galvez said 38,400 doses of the jab would arrive in the Philippines at around 7 p.m. onboard a commercial plane.

These doses form part of the World Health Organization-led COVAX facility’s pledge to initially deliver 525,600 doses to the Philippines as part of its commitment to give the country a total of 4.5 million doses of the shot by May.

Malacañang initially announced that the all 525,600 doses would arrive on March 1, only for this to be delayed to March 4 due to supply and logistical problems, which resulted in only 487,200 doses landing in the country.

Speaking to health workers at the Ospital ng Parañaque, Galvez said all 525,600 doses did not arrive at the same time because a commercial plane was used for its delivery.

The Philippines expects to receive up to 9.2 million doses of AstraZeneca’s coronavirus vaccine this year through the COVAX facility, which ensures that developing countries get access to the coveted drug.

The doses from the COVAX facility is on top of the 17 million procured by the national government, local governments and the private sector, which are expected to arrive later this year.

AstraZeneca’s shot, which has secured emergency use approval from the Food and Drug Administration, is found to be 70% effective on average and only need to be stored at standard fridge temperatures of 2°C.

A member of the private research firm OCTA, however, warned that the shot’s efficacy could decrease to just 10% against the new coronavirus variant first identified in South Africa — 58 cases of which have already been detected in the Philippines.

The health department sought to soothe those fears, saying that the studies cited only used a small sample of individuals, although it did say that the variant from South Africa, known as B.1.351, “may have an impact on vaccine efficacy.”

The World Health Organization stands by the use of AstraZeneca vaccine after a preliminary study suggested the jab offered less protection against B.1.351.

Subversive books pulled out from university library in Isabela