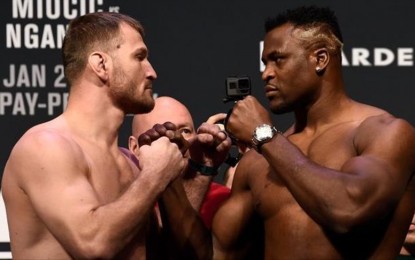 At the beginning of the second round, Cameroon-born Ngannou struck with a jab and a straight punch to ground Miocic. Ngannou dropped another hammer fist, but it was already over and he became the new UFC heavyweight champion of the world.

“I don’t know if I can find the vocabulary to express this, but it feels so amazing,” said Ngannou after the fight.

Three years ago, Miocic won the fight against Ngannou with a lopsided decision.

Saturday’s bout was Ngannou’s second chance to win, and he delivered. (Anadolu)

Previous Federal government to apologize for treatment of No. 2 Construction Battalion members
Next Smuggled cigarettes seized in Zamboanga

Gilas routs Indonesia to remain unbeaten in Group A

Arum on Inoue-Dasmariñas: Fists will be flying

Statement from UP College of Human Kinetics Coach Francis Diaz

Manny Pacquiao among the performers in free online concert