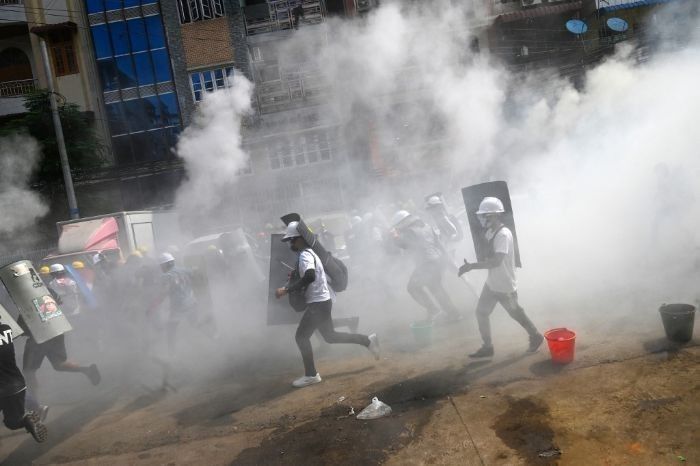 Protesters hold homemade shields as they run during a demonstration against the military coup in Yangon on March 3, 2021.

MANILA, Philippines — The Philippines on Wednesday said it was “deeply concerned” with tensions escalating in Myanmar after state forces opened fire on civilians in anti-coup protests that resulted in at least 10 deaths.

In a statement, the Department of Foreign Affairs said Manila is calling on Myanmar’s military “to exercise restraint and refrain from using excessive force against unarmed demonstrators.”

“The Philippine government reiterates its call for a complete restoration of the status quo ante and allow State Counsellor Daw Aung San Suu Kyi to play her unifying role,” the agency added.

It also advised Filipinos there to avoid flocking to protest sites and to monitor the developments through official sources of information.

On Tuesday, Foreign Affairs Secretary Teodoro Locsin Jr. told regional counterpart that “the rest of ASEAN must stand by Myanmar; ready to give what help it is asked by the people and government of Myanmar.”

He also said that the Philippines is calling for “the complete return to the previously existing state of affairs: with respect to the preeminent role of Daw Aung San Suu Kyi; alongside the Army her father created for the protection of the people he led to freedom and the country he gave them at the cost of his life.”

The Philippines last month “disassociated” itself from a resolution by the United Nations’ Human Rights Council urging the release of Aung San Suu Kyi and other democratic leaders in Myanmar.

In doing so, the Philippines joined China, Russia, Venezuela and Bolivia in stressing that democratic reform should never be achieved through “the imposition of foreign solutions, whether in regional or multilateral contexts, including through this Council.”

The ongoing protests that followed after the military takeover more than a month ago left 10 protesters dead on Wednesday, per a report by the Agence France Presse.

Three cities in central Myanmar saw bloody crackdowns on protesters by security forces on Wednesday, with Monywa in the Sagaing region registering the highest number of deaths with at least seven.

Multiple medics also said they saw two other individuals being dragged away by security forces, though they could not get close enough to confirm if they had died.

In neighboring Mandalay, Myanmar’s second largest city, two demonstrators were killed, a doctor confirmed to AFP, adding that one of the victims was 19 years old and was shot in the head.

And a protest in Myingyan turned deadly when security forces deployed tear gas, rubber bullets and live rounds against protesters carrying red home-made shields emblazoned with the three-finger salute — a symbol of resistance for the anti-coup movement. — Christian Deiparine with reports from Agence France Presse