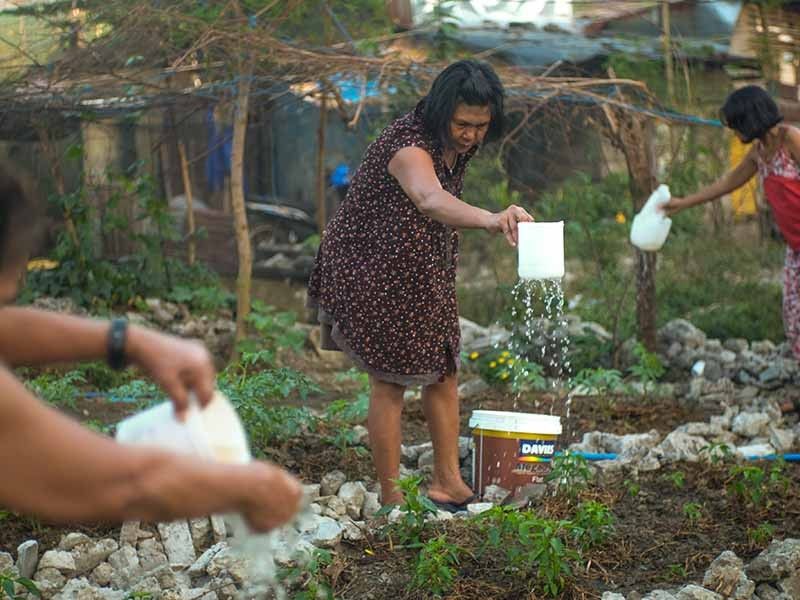 MANILA, Philippines — During the early weeks of the lockdown, one of the first communities that called for relief was Sitio San Roque.

The community along Agham Road is composed of members of the urban poor, some belonging to groups Kadamay and Save San Roque, organizations advancing the rights of the homeless for shelter and security.

Related Stories
Why Kadamay and the urban poor are easy targets for government and the rest of us
San Roque volunteers paint over ‘ACAB’ mural; preps for community learning continue

However, instead of relief, what they got was the detention of 21 community members.

Almost a year since the arrests and with the country now earning the title of the “world’s longest lockdown,” the community continues to struggle to survive the pandemic.

RELATED:Driven by hunger, urban poor go out for rumored relief drive but are haled into court instead

Duterte’s strong-arm approach to pandemic response took a toll on the economy, and in effect, displaced the poor, who are mostly daily wage earners, from their livelihoods.

In response to lacking government support, the urban poor community, led by the women of Kadamay and Save San Roque, established an urban garden guided by the principles of organic farming. 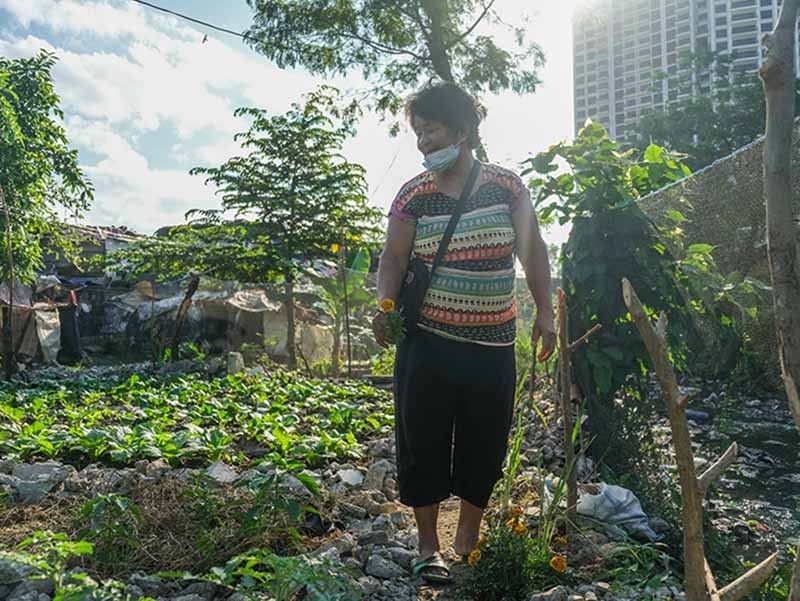 “Our community garden was established to strengthen the people and give them food support, especially during this pandemic. We have to feed our people, but we don’t have the budget to fund community kitchens, so we thought of planting our food to start. Pantawid lang sa sikmura (Just to fill our stomachs),” Bagasbas, San Roque resident and vice-chairperson of Kadamay, says in Filipino.

Sitio San Roque is located at the heart of Quezon City, and residents who have been living there since the 1980s have been facing threats of demolition for a decade now over a planned Quezon City Business District.

Residents reported in 2019 that they were given an option to accept P32,000 and access to better housing if they demolish their homes. But those who self-demolished only received P5,000 and were offered relocation sites with no access to water and electricity.

This is one of the reasons that, despite continuous threats, residents continue to assert their right to their homes.

Residents of Sitio San Roque, through consultations within the community and with lawyers and other volunteers, have come up with a Community Development Plan for in-city and on-site housing

They submitted the CDP to Mayor Joy Belmonte in a dialogue at city hall in December 2019 that she described as a “very fruitful meeting.”

“I will try my very best to gather all the relevant agencies together so we can agree on a resolution acceptable to all,” a report on the dialogue also quotes her as saying. Members of the community, along with volunteers from SAKA, clear rocks from demolished homes on Feb. 6, 2021 to use the space for farming 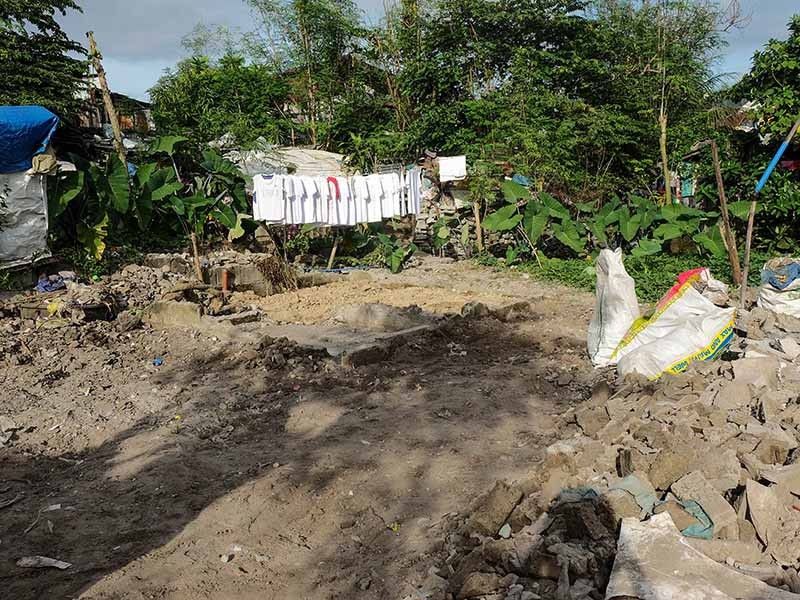 In the meantime, and in the middle of the pandemic, Sitio San Roque’s residents have had to make the best use of what land they can still use.

Women had to find time in between managing their households and attending to their livelihoods just to clear the land where demolished homes used to stand.

Using their bare hands, mothers carried rocks, scraped the soil, and properly disposed of non-biodegradable waste such as used diapers to reclaim spaces.

Aside from the strenuous work of land clearing, residents said they also faced intimidation from private security guards.

“Initially, we couldn’t even bring in soil to put over the rocks without getting harassed or being questioned by the guards, but what we’re doing is simply planting food,” Bagasbas says. 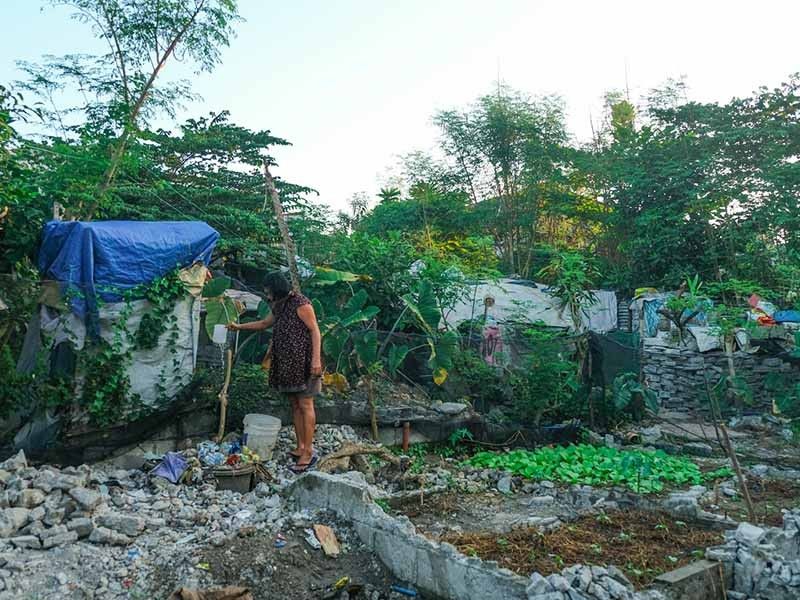 On March 10, 2021, after weeks of consistent community work, cabbages now grow where a house used to stand

To enrich their efforts, the community also requested assistance from SAKA, an alliance of cultural workers for land reform and food security, to give them workshops on organic farming.

Bagasbas’ family was one of the first 25 who inhabited San Roque in the mid-1980s, when, she said, the land was still a grassy cogon field.

“The land here was fertile, life was easier when I first came since we planted and sold abundant crops of taro, celery, and onions for a living,” Bagasbas says.

“Back then, I used chemical pesticides for my crops, but I noticed that they also harden and destroy the soil. Receiving workshops on organic farming was helpful not just for myself but also to my community because I can now also teach others to care for their crops better,” Bagasbas adds. 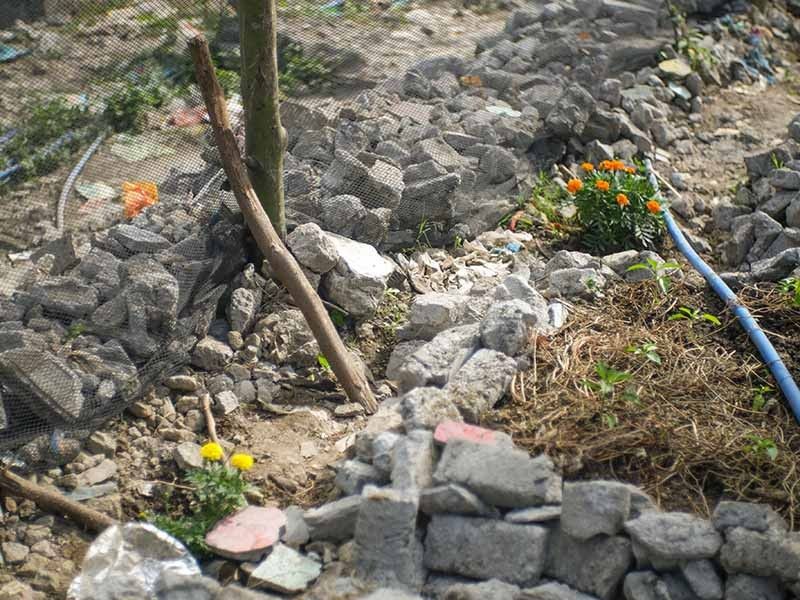 Rocks from demolished homes are now used to separate the different crops found in the urban garden. Planted beside the fruit-bearing crops are marigolds to serve as natural insect repellents. Members of Kadamay maintain their agroecology garden, planted with cabbage, mustard, tomatoes and pepper on March 10, 2021

“Our organic garden today is a way for us to resist demolitions while promoting food security. We hope that the rich won’t destroy our crops by demolishing [our community]. We hope that they realize that the poor are, in fact, very diligent,” Bagasbas says as she points to the garden they have cultivated.

2021-03-23
AtinitoAdmin
Share
Previous NRX Jeremiah 29:11 eager to step up in second week of CGI
Next Palace happy that many people in ‘NCR Plus’ bubble are cooperative

Gordon sees no wrong with giving PDAF to PRC

Duterte limits use of face shields to ‘closed, crowded’ areas