Women who are Black, Indigenous or people of colour are among the most severely affected by the pandemic — and will continue to be after it’s over, unless we provide the support necessary to ensure their physical and economic wellbeing, writes Reyhana Patel.

Women who are Black, Indigenous or people of colour are among the people most severely affected by pandemic

It’s been a year since the first provinces declared states of emergency due to COVID-19, and it’s fair to say the impact of the pandemic has taken a huge toll on all of us. It has affected physical and mental health, our children’s education, our ability to socialize, and for many of us, the way we work and our finances.

While an enormous number of people have lost their jobs or suffered business losses, women in particular have felt the effects of the pandemic. Several studies, including one by the Canadian Public Policy journal in December 2020, show that disproportionately it is women who have left their jobs or pared back their hours to take on child care and virtual-learning duties, for example.

And when you dive in deeper, it’s women who are Black, Indigenous and people of colour (BIPOC) who are among the most severely affected — and who will continue to be after the pandemic is over. That’s according to a new report,One Year Later: Unmasking COVID-19, released Wednesday by Islamic Relief Canada and York University.

Despite the fact that more than 80 per cent of jobs have been recovered since the start of the pandemic, a high proportion of women — in particular, members of visible minorities — have not gone back to work, citing a variety of reasons that include things such as lack of child care. The new report notes that based on the most recent demographic statistics available, as of November 2020, Black women had one of the highest unemployment rates at 13 per cent, while the rate is 17 per cent for Indigenous women. That compares to an average national unemployment rate of 8.5 per cent for the same period, according to Statistics Canada.

And while StatsCan says the national unemployment rate fell to 8.2 per cent in February this year — the lowest it has been since the start of the pandemic — Arab and Southeast Asian women face the largest employment gaps (-13.6 and -11.8 percentage points respectively) compared to non-racialized women. 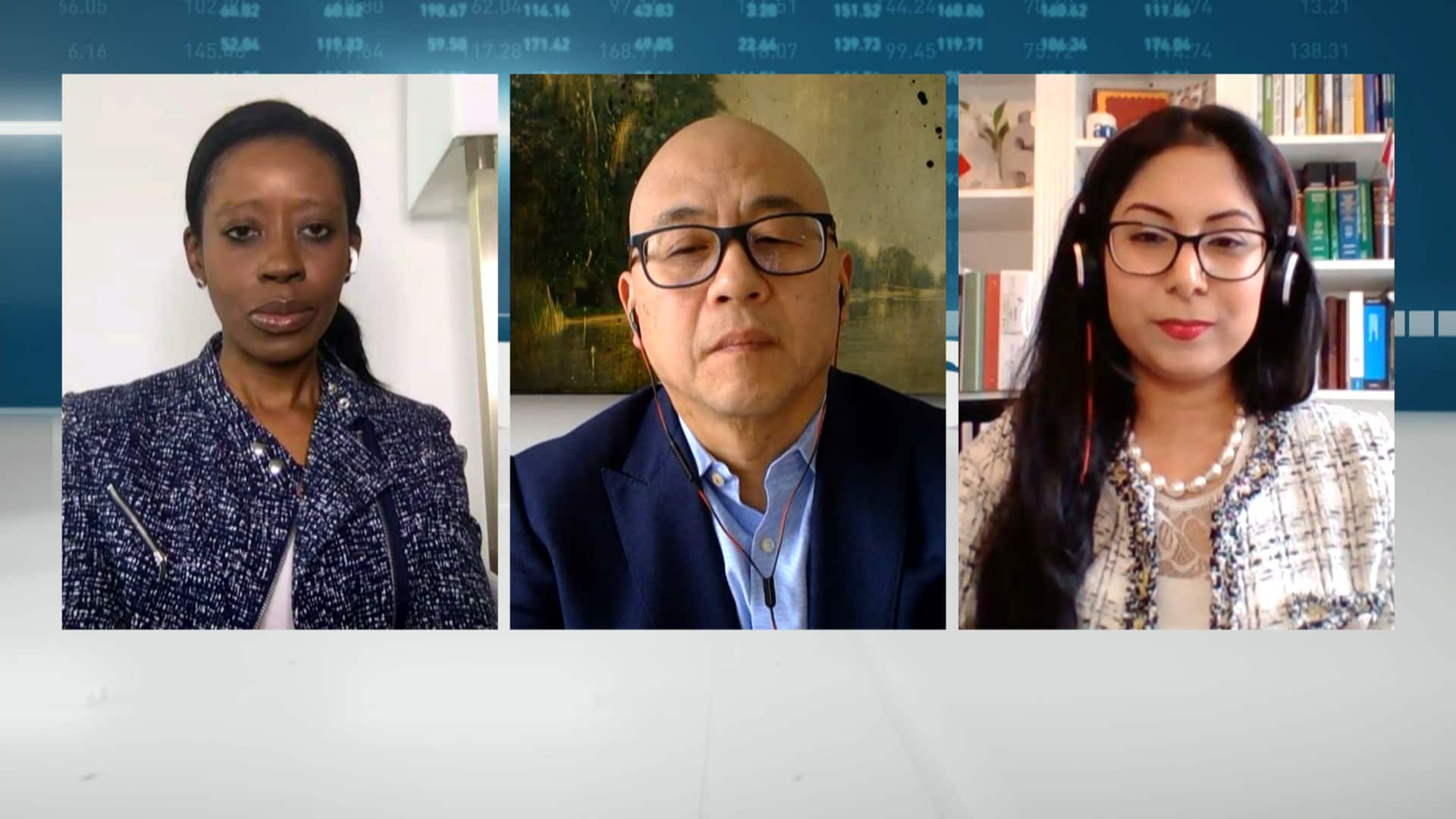 Our weekend business panel discusses a new analysis from RBC that takes a closer look at women and employment during the pandemic. Plus, numbers from Statistics Canada reveal that Canada’s real GDP shrank 5.4 per cent in 2020. And Twitter reveals it’s forming an engineering hub in Toronto.

There has also been an uptick in domestic violence as more time is spent in the home. The Canadian Medical Association Journal warns that, “Rates of intimate partner violence (IPV) have increased and will remain an important health care concern as a result of the economic impact of the pandemic and the social distancing measures required to limit the health system burden of coronavirus.”

It adds that calls to the Vancouver Battered Women’s Support Services have tripled, while Alberta’s specialized crisis lines for IPV have seen a 30 to 50 per cent increase in calls. A Toronto Foundation report released in November says Black, brown, and Indigenous women accounted for 73 per cent of the approximately 3,600 calls made to Ontario’s Assaulted Women’s Helpline in May 2020 alone, compared to 60 per cent of calls received during the same month the year before.

In addition, women of colour are over-represented in high-risk jobs that expose them to COVID-19. There is a concentration of racialized workers at food processing plants and long-term care homes, for example, where large outbreaks have been connected to inadequate personal protective equipment. In the health care field as well, there is a disproportionate number of Black and Filipino female workers.

Not only are racialized women in the workforce more at risk of contracting COVID-19, they are also earning less while doing so. According to a Canadian Centre for Policy Alternatives report, a BIPOC woman earns approximately 58 cents for every dollar that a white male earns in Ontario.

It’s essential we provide women of colour with the long-term support that is necessary for their wellbeing, both from a health and an economic perspective. More government action is needed on a number of fronts to help BIPOC women get back on their feet and have equal access to safe work and to career opportunities.

Based on the findings of the One Year Later: Unmasking COVID-19 report, for example, BIPOC communities — along with essential workers, the elderly and those with underlying medical conditions — should be prioritized for vaccines in regions with high rates of COVID-19. The current data shows that Black Canadians and other racialized communities are most at risk of catching the virus and have a higher chance of dying from it, so it makes sense to protect them. This would also lower the chances of the virus spreading to the wider community.

Universal financial support in the form of the Canadian Emergency Response Benefit (CERB) and Canadian Recovery Benefit (CRB) are not enough to address the serious economic inequities that the pandemic has exacerbated in some communities. The level of financial support individuals receive should depend on how hard individuals have been hit. Targeted support through a financial relief fund for particularly economically disadvantaged Canadians, including female workers and members of BIPOC communities, would help minimize the pandemic’s current and long-term impact.

Additionally, programs assisting Indigenous and Black women — who are facing particularly high unemployment rates — to find suitable and well-paid employment should be a priority.

Alongside this, the federal government should create a subsidized early-learning and child care program. This would ultimately help all women, regardless of race, to re-enter the workforce more easily post-pandemic, benefiting both workers and the national economy.

Without this kind of meaningful action, racialized women in particular are among those who stand to lose the most in this pandemic on all fronts — their jobs and careers, their physical safety at home, their health, and even their lives.

Desperate to see his dying mom, a bus driver put out a plea. The response bowled him over

2,000 patients have been transferred around Ontario to free up beds — but it’s taking a toll

Quebec is set to present its long-awaited revamped language law. Here’s what to expect