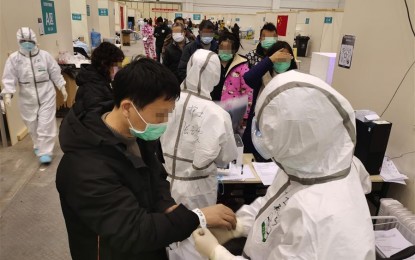 GENEVA – The World Trade Organization (WTO) said on Wednesday global trade was primed for a strong but uneven recovery, forecasting an increase of 8 percent in world merchandise trade this year.

Prospects for a quick recovery in world trade have improved as merchandise trade expanded more rapidly than expected in the second half of last year, the WTO said in a statement.

“World merchandise trade volume is expected to increase by 8 percent in 2021 after falling 5.3 percent in 2020, a smaller decline than previously estimated,” the WTO said.

“Trade growth should then slow to 4 percent in 2022, and the effects of pandemic will continue to be felt as this pace of expansion would still leave trade below its pre-pandemic trend,” it added.

However, the WTO warned that the positive short-term outlook for global trade was marred by regional disparities, continued weakness in services trade, and lagging vaccination timetables, particularly in poor countries.

It said the Covid-19 pandemic still remains the biggest risk to the trade outlook, as new surges of infection could easily undermine any hoped-for recovery.

“Keeping international markets open will be essential for economies to recover from this crisis and a rapid, global and equitable vaccine rollout is a prerequisite for the strong and sustained recovery we all need,” WTO Director-General Ngozi Okonjo-Iweala said in the statement.

Okonjo-Iweala also said that ramping up the production of vaccines would allow businesses and schools to reopen more quickly and help economies get back on their feet.

“But as long as large numbers of people and countries are excluded from sufficient vaccine access, it will stifle growth, and risk reversing the health and economic recovery worldwide,” she said.

Meanwhile, the WTO figures showed that China was the world’s top exporter last year and the second-largest importer behind the United States.

“Our projections show a strong recovery in Asia for 2021 in terms of exports,” WTO’s Chief Economist Robert Koopman told a news conference. “China is a big driver in that. We also see a recovery in imports in Asia.”

Asked about the trade outlook, senior WTO economist Coleman Nee told the same press conference that China has been supplying a lot of goods in 2020 for which demand held up quite well, including surgical masks and other medical supplies.

“China still has its important position in products for which demand remained strong in 2020 and will remain strong as we exit this pandemic,” he said. (Xinhua)

‘Event Over’: Rahul Gandhi Takes a Dig at Record Vaccination on PM’s Birthday

U.S. accelerating removal of Haitian migrants at border with Mexico

A tussle at nursery leaves our boy tearful …

Citizen astronauts aboard SpaceX capsule safely splash down off Florida