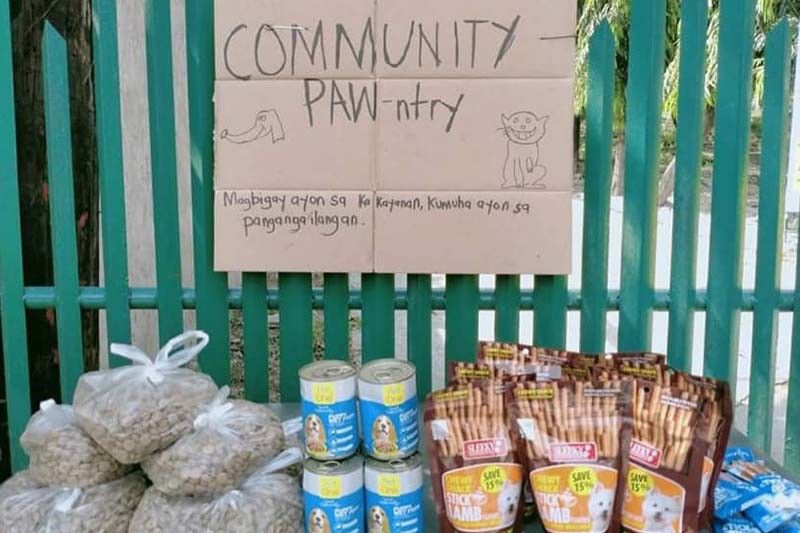 MANILA, Philippines — As the pandemic bites and many wait for sufficient government aid, community pantries for hungry Filipino families continue to rise and groups Philippine Animal Welfare Society and Animal Kingdom Foundation are helping ensure that every mouth will be fed — including those of beloved pets.

Inspired by the Maginhawa Community Pantry, the Philippine Animal Welfare Society on Monday set up a “Community PAW-ntry” in front of its office along Aurora Boulevard. in Katipunan Valley, Loyola Heights, Quezon City.

Community pantries pop up as people wait for government aid

“The Community PAW-ntry table will be there for as long as we have extra supplies to give from 8 a.m. to 5 p.m. every day except Sundays and holidays,” they said in a Facebook post.

The non-profit group admitted that cat food is also difficult to procure so they can also share whatever extra they have for other pet owners. They also urged those who wish to donate that they can also give cat food to feline friends under PAWS’ care.

PAWS said those who wish to drop off donations may reach out to them and someone from their office can help them arrange the food and treats.

“We know that many of our fellow Filipinos are affected by the pandemic and lockdowns. Many lost jobs and income is insufficient to support the needs of their families, including their pet dogs and cats,” it said in Filipino.

AKF said more BARKYanihan stations will be opened this week in the following areas:

Another non-profit group, PAWSsion project, said in January that, since the pandemic, they have been dealing with increasing distress calls for rescue and dwindling donations since the pandemic last year. More families are also forced to surrender their beloved pets as their livelihoods were affected too.

PAWSsion Project founder Malou Perez shared: “There were more animals in need since the pandemic happened, more animals being abandoned, more hit-and-run cases, more pet surrenders as people were also losing their sources of income…[It] also affected us, given donations slowed down but the needs of the rescues did not just remain the same but actually increased even more.”

PAWS meanwhile encouraged other communities to replicate their Community PAW-ntry to help pandemic-struck families to provide for their beloved pets. The group has announced that they are conducting free spaying for pets of 4Ps cardholders.

2021-04-18
AtinitoAdmin
Share
Previous Pivot reboot
Next Tree-range chickens: How raising poultry in the woods of B.C. could improve food security for some communities