Community pantries pop up as people wait for government aid 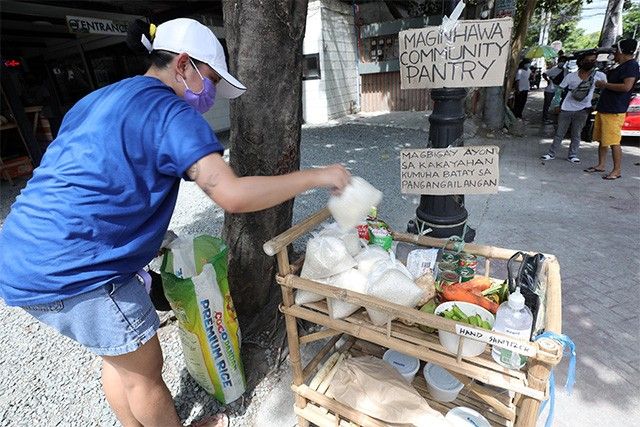 MANILA, Philippines — On the 397th day of lockdown in the pandemic-stricken Philippines, a show of people’s solidarity in different parts of the country: community pantries to assist the hungry.

The first one popped up along Maginhawa Street in Quezon City. It didn’t take the government or an organization; just a concerned citizen and a bamboo cart.

Two days after the effort, the idea materialized elsewhere in Diliman, Sampaloc, and even Laguna.

For lawmakers, the communal pantries are only evidence of the national government’s inability to take care of its own people amid the pandemic.

Speaking in an interview aired over DZBB Super Radyo, Sen. Panfilo Lacson called them a sign of “desperation,” noting that “people can no longer rely on the government to help them.” 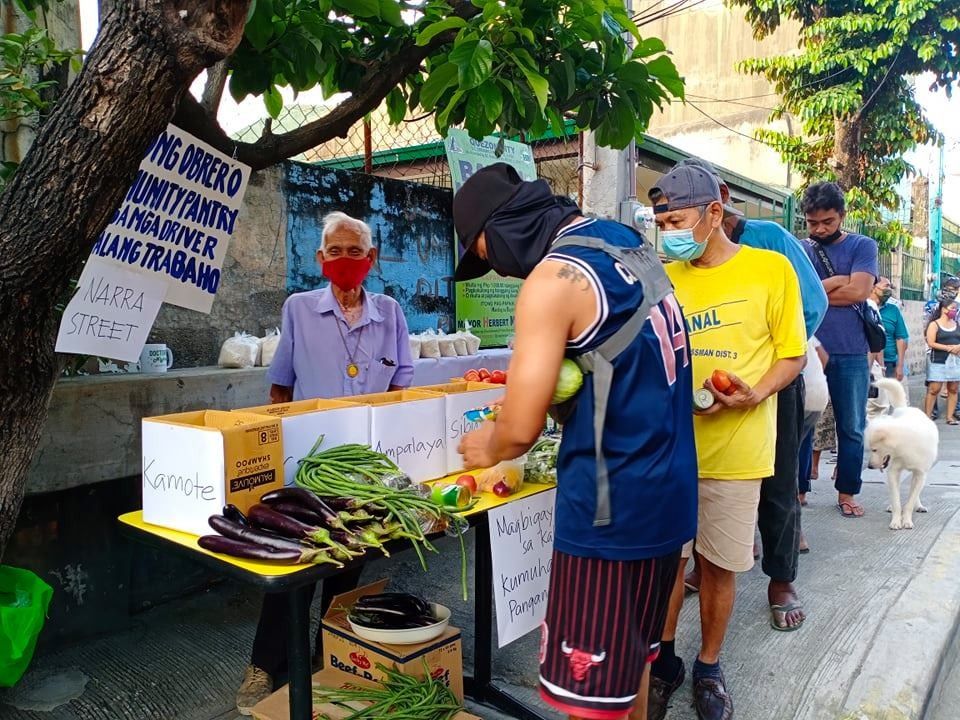 Photo shows another community pantry set up along Narra Street in Quezon City by Elmer Cordero, one of the Piston drivers arrested for holding a protest earlier in the pandemic.

In response to the first pantries that were put up, the Palace praised the idea and called for the public’s cooperation. It also used the opportunity to point to the cash and material aid distributed under the government’s Social Amelioration Program.

“The emergence of community pantries is laudable. It exemplifies the Filipino bayanihan spirit during this challenging time of Covid-19,” Presidential Spokesperson Harry Roque said in a press statement.

“As we have said on numerous occasions, we cannot defeat the COVID-19 pandemic alone. We need the support and cooperation of everyone,” Roque said.

To recall, under the government’s aid or “ayuda” rollout, low-income residents within the so-called ‘NCR Plus’ bubble will be receiving P1,000 in kind or cash at a limit of P4,000 per household.

“Going deeper from our culture of bayanihan, community pantries are sprouting because the masses are well-aware of the inutility of the Duterte administration to provide socio-economic aid and medical solutions amidst this global pandemic,” Kej Andres, Student Christian Movement national spokesperson, said in a statement.

“The establishment of these community pantries is a living proof of how the masses cannot wait for incompetent leaders. However, this undertaking of the masses does not end with these pantries. They will become avenues to strengthen community organizing and action, address immediate concerns, and demand accountability from this incapable government.”

But the Palace on more than one occasion has rebuffed, downplayed, and even rejected calls for assistance.

Officials have also pointed out that other countries are also struggling or have accused government critics of politicking, though it is unclear how these statements are any comfort to Filipinos on the ground.

READ: Palace on quality of life survey: All of us are having a hard time | Palace ‘delighted’ that survey results ‘only’ at 45% joblessness

“Perhaps they don’t realize that the realities on the ground are different. If only the government was more aware of the situation on the ground so they can respond better,” Vice President Leni Robredo said earlier Sunday. 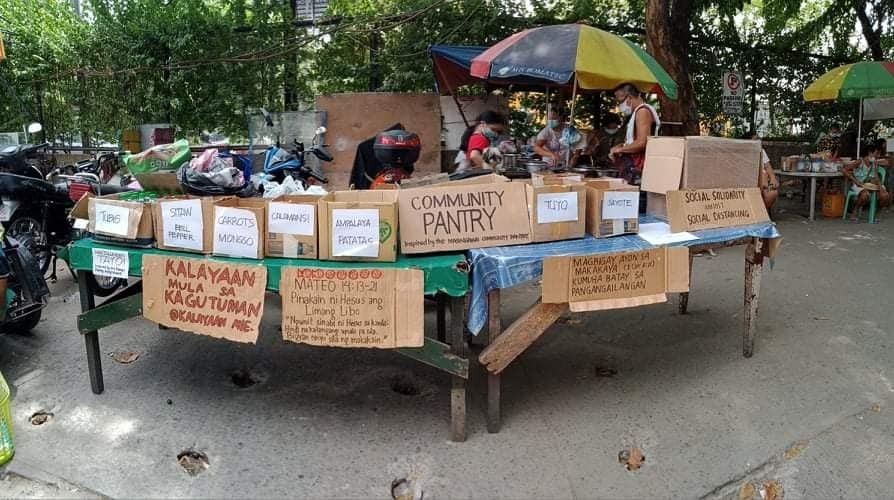 Progressive groups have long said that the amount is grossly insufficient on top of slow to distribute as cases continue to surge.

“The construction of community pantries is proof that the Filipino people are ready to help each other especially now that most Filipinos are still not receiving help. The aid is already too late,” said Joshua Marcial of Tulong Kabataan.

“It is also proof that the people can no longer resent those who are starving, getting sick, and dying due to the failed response of the Duterte government,” added Raoul Manuel of Kabataan Partylist.

RELATED:DSWD says 1.75 million in ‘NCR Plus’ got cash aid so far, hopes for faster distribution

The Ayuda Network, a worker-led alliance, protested in front of Mendiola on Friday alongside labor unions and federations to push for immediate wage subsidy and monthly cash aid.

“Less than two days’ wages is not enough as aid in the midst of rising prices. We are calling for an immediate P100 wage subsidy equal to the lost amount in the minimum wage. We are also calling for P10,000 per month assistance especially for those lost and without or lack of work,” Buddy Carranza, convenor of Ayuda Network, said in Filipino in a statement.

“Workers do not feel the effects of aid and vaccinations. The government is billions of pesos in debt for vaccinations but so far we have relied on donations from other countries.”

The message behind the rise of community pantries is simple: when government is absent, we can look after each other. When the situation seems hopeless, we can lift each other’s spirit. Magtulungan, magtiwala sa isa’t-isa, at manalig sa Maykapal.