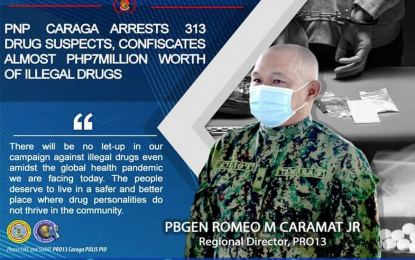 Brig. Gen. Romeo M. Caramat Jr., PRO-13 director, said during the period, their units confiscated 605.6 grams of suspected shabu and 370.8 grams of marijuana, with an estimated street value of more than PHP6.9 million.

“Of the 313 suspects arrested during the conduct of 283 anti-illegal drugs operations, four were killed when they resisted arrest and engaged the police operatives in armed encounters,” Caramat said in a statement.

All arrested suspects are now facing criminal charges in violation of the provisions of Republic Act 9165 or the Comprehensive Dangerous Drug Act of 2002, he said.

Caramat acknowledged the support of other line agencies of the government, particularly the Philippine Drug Enforcement Agency (PDEA), for the success of the operations during the period.

“There will be no let-up in our campaign against illegal drugs even amidst the global health pandemic we are facing today. The people deserve to live in a safer and better place where drug personalities do not thrive in the community,” he said. (PNA)

‘Amihan’ to bring rains across Luzon