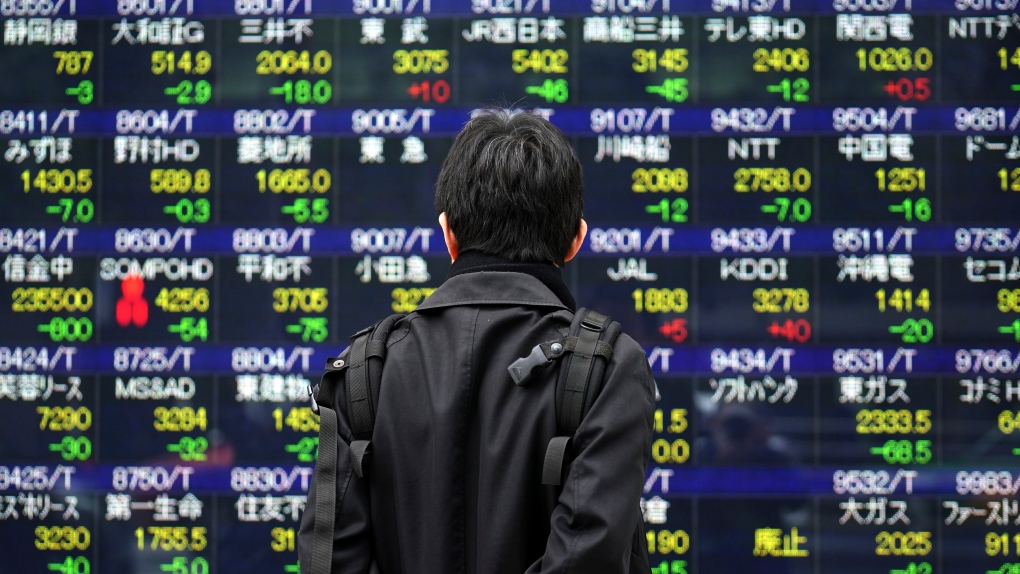 A man looks at an electronic stock board at a securities firm in Tokyo Friday, Jan. 15, 2021. (AP Photo/Eugene Hoshiko)

Hong Kong, Sydney and Seoul advanced. Tokyo and Shanghai were closed for holidays.

On Monday, a strong dose of positive earnings reports and economic data that showed the U.S. economy is growing pushed the S&P 500 up 0.3%. U.S. futures were lower on Tuesday.

The Reserve Bank of Australia left its policies unchanged Tuesday at its May meeting.

The lack of trading in China and Japan and mixed results in New York "left the region content to sit in wait-and-see mode with Covid-19 nerves regionally, offsetting the bullishness of the Wall Street reopening gnomes," Jeffrey Halley of Oanda said in a commentary.

On Monday, Federal Reserve Chairman Jerome Powell said the economic outlook has "clearly brightened" in the United States, but the recovery remains too uneven.

Stocks have been grinding higher on expectations of an economic recovery and strong company profits this year as large-scale coronavirus vaccination programs help people return to jobs and normal activities after more than a year of restrictions. Massive support from the U.S. government and the Federal Reserve, and increasingly positive economic data, have also helped put investors in a buying mood, keeping stock indexes near their all-time highs.

More than half of the companies in the S&P 500 have reported their results so far this earnings season, which show profit growth of 54% so far, according to FactSet.

This is another busy week for earnings reports, with Merck, Pepsi, Colgate-Palmolive and CVS among the companies reporting their latest quarterly results. Investors will also get April’s jobs report on Friday.

On the economic front, a report on U.S. manufacturing activity in April came in below economists’ expectations, but still was strong for the month. The Institute for Supply Management’s manufacturing index came in at 60.7 for April, compared with the 65.0 reading that was expected. However that figure is still well above the 50-point mark that indicates expanding manufacturing activity.

U.S. benchmark crude oil gave up 8 cents to US$64.41 per barrel in electronic trading on the New York Mercantile Exchange. It rose 91 cents on Monday to $64.49 per barrel. Brent crude, the international standard, declined 10 cents to $67.46 per barrel.

2021-05-03
AtinitoAdmin
Share
Previous Ottawa says it has no idea how many people defied hotel quarantine rules
Next In Dilshad Garden, Not Just Remdesivir, Common Drugs Scarce Too

Depleted Berong Nickel‘s old mine to be rehabilitated