Part of the reason banks are reluctant to lend is their growing pile of bad debts. Across the broader banking system, gross non-performing loans went up 3.2% in just a month’s time and were already equivalent to 4.21% of all loans. (STAR/File)

MANILA, Philippines — Banks sustained a grim trend of tepid lending while accumulating unpaid loans, a dangerous combo that is likewise blocking central bank efforts to bring liquidity to pandemic-stricken consumers and businesses who need them the most.

On one hand, big banks have continued to resist on giving out credit with its loan books, except lending to each other, shrinking 4.5% year-on-year in March, a report showed on Monday. That was the fourth straight month of worsening contraction and the deepest slump since May 2004.

Part of the reason banks are reluctant to lend is their growing pile of bad debts. Across the broader banking system, gross non-performing loans went up 3.2% in just a month’s time and were already equivalent to 4.21% of all loans. That was the largest NPL ratio since August 2009 or during the aftermath of the global financial crisis.

Such scenario of decreasing loans and rising unpaid credits has been happening since April last year at the height of coronavirus lockdowns, and observers were careful to project an end to the trend at this early. If anything, they are expecting it to worsen, with lenders continuing to pull back from lending— exacerbated by wary borrowers afraid of getting burdened by debt— while existing loans sour with declining incomes and elevated joblessness. 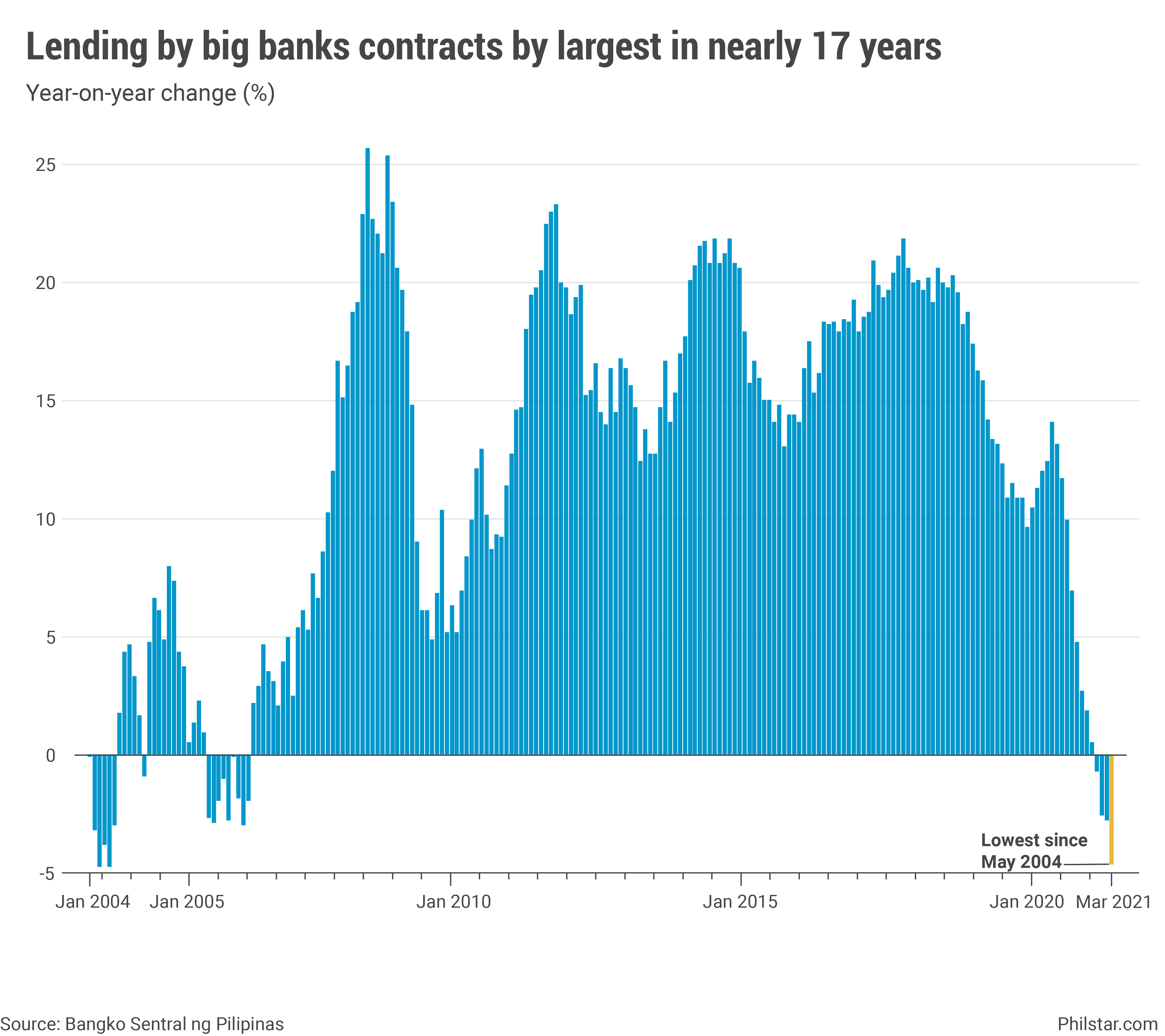 Even the Bangko Sentral ng Pilipinas (BSP) believes things will get worse first before they get better. Apart from NPL rising as much as “above 5%” this year as banks predicted, BSP Deputy Governor Chuchi Fonacier said the same sees their defenses crumbling with NPL coverage ratio likely deteriorating to as much as 76% by yearend.

That means banks are already tapping on the capital they raised during the rainy days and are slowly seeing them decline. In March, the coverage ratio already stood 83.09%, the lowest since February 2009.

Meanwhile, lenders are not differentiating between consumers and enterprises in terms of lending. Loans to large production activities including infrastructure building and those that fund company operations dipped 3.2% year-on-year in March. For households looking to spend for home improvements to just simply augmenting income, loans plummeted a tenth year-on-year, already the worst on record.

On a broader scale, the whole scenario is presenting a huge roadblock to a much-criticized government strategy of relying on banks for recovery. The Duterte administration has rejected persistent calls for the government to step on the spending accelerator, pointing at banks as reliable credit source to jumpstart an ailing economy. That has not happened, and the first-quarter data on gross domestic product out Tuesday may show the severe consequence of such tact.

With lending down, money supply growth has likewise slowed to 8.5% year-on-year in March, the slowest in one and a half years.

Worse, the impact may go well beyond just delaying the return to path of economic growth. While the entire world battles the raging coronavirus, in the Philippines, an ongoing African swine fever epidemic that killed pigs have compounded the problem by tightening supplies of a major protein source and stoking inflation. Apart from pork imports, the administration’s solution bets on over P40-billion in loans from state banks to hog raisers even if the latter have been repeatedly saying they have no appetite for bank credit if their profits do not improve.

Some have argued that a looser fiscal policy is warranted at this time simply because bank lending growth follows economic expansion, and not the other way around. “New coronavirus strains/variants that are more contagious could potentially slow down the economic recovery…that could also slow down any pick up/recovery in loan demand,” Michael Ricafort, chief economist at Rizal Commercial Banking Corp., said.

BSP has said that its aggressive easing last year, which brought key rates at record-lows, have released over P2 trillion in liquidity to the financial system, but with banks not confident in lending while the economy is at its worst, cash is only rolling back to the central bank who would need to consistently absorb back excess money as part of its mission to keep inflation under control.

With the government sticking on its fiscal guns at the moment, the end is not yet in sight for this cycle.

Pagcor gaming revenues down this year