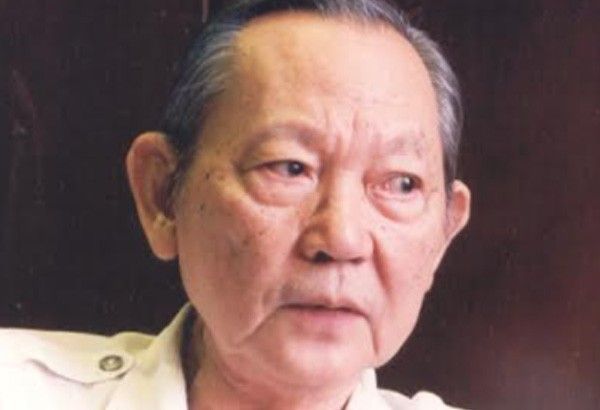 MANILA, Philippines — The Cultural Center of the Philippines (CCP) mourns the passing of National Artist for Visual Arts Arturo Luz who died on Wednesday, May 26. He was 94 years old.

“It is with deep sorrow that I announce the passing of my father, our beloved National Artist, Arturo Luz. He peacefully joined his Creator at 8:45 this evening, and I stood by his side as he took his last breath,” she said.

A painter, sculptor and designer for more than 40 years, Arturo Luz was conferred the National Artist Award, the highest national recognition given to Filipino individuals who have made significant contributions to the Philippine arts, in 1997.

In his ONAA citation: He “created masterpieces that exemplify an ideal of sublime austerity in expression and form. From the Carnival series of the late 1950s to the recent Cyclist paintings, Luz produced works that elevated Filipino aesthetic vision to new heights of sophisticated simplicity.

By establishing the Luz Gallery that professionalized the art gallery as an institution and set a prestigious influence over generations of Filipino artists, Luz inspired and developed a Filipino artistic community that nurtures impeccable designs.

Before his death, Luz served as a founding director of the Metropolitan Museum of Manila from 1976 to 1986.

The CCP has been home to two of his best masterpieces. His mural painting “Black and White” can be seen at the lobby of the Tanghalang Aurelio Tolentino (Little Theater); while his “Paper Clip” sculpture is located at the South Lawn.

It has been customary for the CCP to do a “Parangal” for the departed National Artist. Due to the limitations caused by the COVID-19 pandemic, the family has expressed that they want the necrological service to be held on a later date so that those who want to pay their last respect can attend the program.

The family of the late National Artist will send their official statement soon. The CCP and NCCA will make further announcements on the necro service.

2021-05-27
AtinitoAdmin
Share
Previous Is GInvest a G? How this new GCash feature can work for you
Next Trudeau delivers apology to Italian Canadians for internment during WWII

Filipino Centre of Toronto (FCT) Says YES to Socials, NO to AGM; A Record Setter of Sorts

Everything you need to know about PRESTO, before your next ride. It may have been …