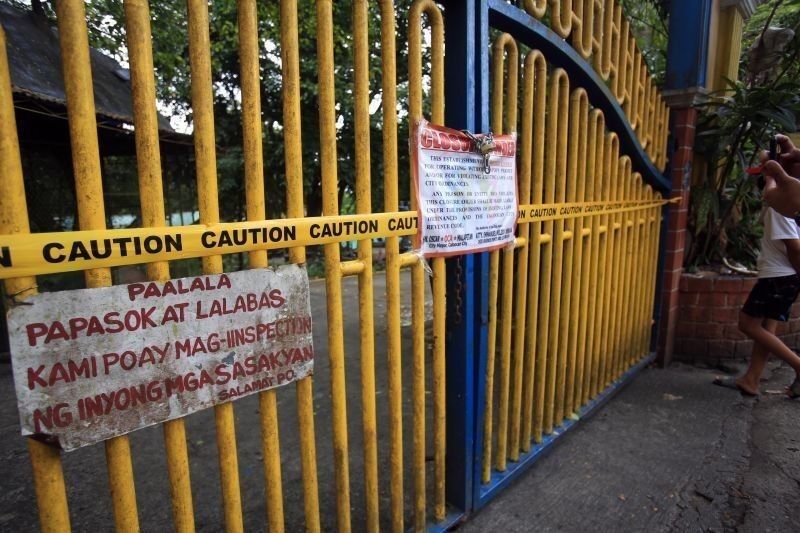 MANILA, Philippines — The Department of Justice is still polishing its guidelines on arresting people who break pandemic safety protocols. Those guidelines may soon include fresh orders from President Rodrigo Duterte to arrest barangay chairpersons for mass gatherings that happen in their villages.

Angered by reports of swimming parties and picnics despite the quarantine, Duterte in a public address late Wednesday night directed police to arrest barangay chairpersons where the incidents took place.

Related Stories
LGUs, police to adjust policies again as Duterte orders arrests for improper mask use
Amid confusion on arrest order, DOJ chief tells public to just wear masks properly
“I’m ordering the police to arrest the barangay captain and bring him to the station, investigate him for being a derelict, of dereliction of duty having failed to enforce the law,” Duterte said, referring to possible violations of dereliction of duty on the part of village leaders.
“You will be the first. If this happens again, if there is one single incident beginning tonight, the police will just arrest the barangay captain first and bring him to the station together with those who are having picnic there arrest them all, have them investigated and detain them,” he added in Filipino.
Justice Undersecretary Adrian Sugay, on ANC’s “Rundown”, said the department will look into whether the guidelines they are crafting with the Department of the Interior and Local Government can include this new order.
“We were supposed to issue it this week. We will see if we can include this issue in the circular before we release it. We will look into it,” he said.
Duterte first ordered the detention of those who are not wearing masks properly on May 5 and the DOJ and DILG set out to come up with guidelines on the arrest. Justice Secretary Menardo Guevarra said Wednesday that Interior Secretary Eduardo Año “has agreed in principle to approve the joint guidelines on arrest, detention, and investigation of health protocol violators as drafted by the DOJ.”
A few minor tweaks may still be done, but “these guidelines will be ready for signing by Friday and the media will be advised accordingly,” he added.

The DOJ official also noted that some local ordinances already impose punishments for violating of social distancing protocols and on unauthorized social gatherings.

“There are in fact laws in place already and the police officers and our law enforcement agencies have actually been implementing these laws these past few months so we see no reason why there could be any confusion with regard to the matter of the president’s directive,” he added.

While only a judge can issue a warrant, Sugay noted that under the Rules of Court, if a person is caught in the act of committing a crime, an arrest may be made.

“Like, for instance, if you know there’s a violator, there’s somebody violating some municipal ordinance or local government unit-issued ordinance with regard to social distancing, there may be arrests made but these have to be made strictly in accordance with the provisions of the Rules of Court and the decision of the Supreme Court with regard to warrantless arrests,” he said.

But Duterte in his address said the barangay chairpersons may face cimplaints of dereliction of duty under the Revised Penal Code. His chief presidential legal counsel Salvador Panelo meanwhile suggested a reckless imprudence charge may likewise be filed against violators.

“Right now, we really need to look into it whether or not these will be applicable with regard to cases where violators are caught in flagrante delicto with regard to barangay officials caught you know, I guess, so to speak, sleeping on the job,” Sugay said.

“I guess these are things that we still really need to look into. This is new to us. I actually heard it last night. We will look into it. And when cases are filed, you can all be sure that the Department of Justice will study this very carefully.”