Palace: ‘All or nothing’ policies in West Philippine Sea dangerous, unproductive 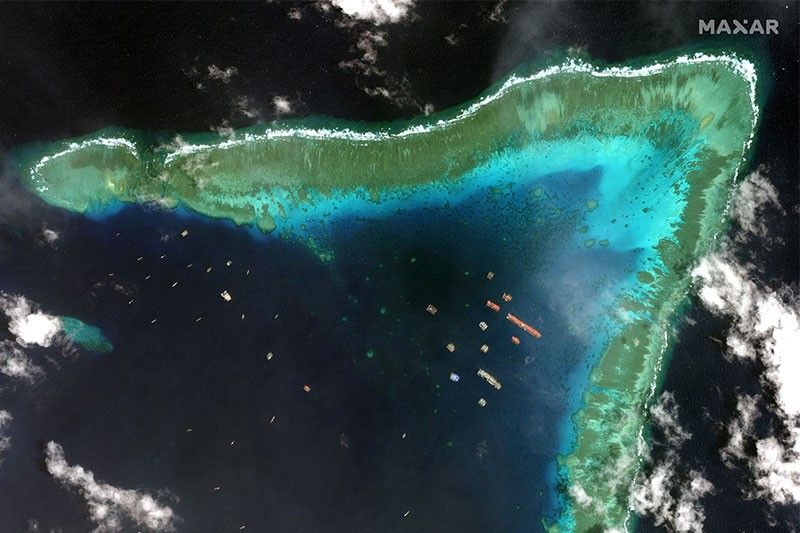 MANILA, Philippines — The Palace on Sunday urged critics to let President Rodrigo Duterte continue his “careful, calculated, calibrated” approach to tensions with China in the West Philippine Sea instead of calling for “all or nothing” policies.

In a statement sent to reporters, presidential spokesperson Harry Roque again said that asserting the country’s sovereignty over the West Philippine Sea — the part of the South China Sea within its Exclusive Economic Zone — will lead to war.

Related Stories
China insists sovereignty over Panatag Shoal, Pag-asa Island amid Philippine coast guard drills
China coast guard ships illegally remain in West Philippine Sea — task force
Carpio to ‘sleeping’ Duterte: China is not in possession of West Philippine Sea
“History shows that countries who demand all or nothing policies often get nothing at all, or even end up provoking war. This is exactly what the president is avoiding,” Roque wrote.
“All or nothing policies are not only inconsistent with international law and international reality—they are dangerous and they will not work.”
Members of the Phillippine delegation in the South China Sea arbitration case as well as members of the academe have said that standing by the 2016 arbitral award does not necessarily mean going to war with, and have suggested other possible measures to uphold the ruling.
“The claim that enforcing the arbitral award means going to war with China, a war the Philippines will surely lose, is an utterly false claim, designed to intimidate the Filipino people to submit to the will of China,” retired Senior Associate Justice Antonio Carpio said in 2019.
Roque in his statement was responding to pronouncements by Carpio and former foreign affairs secretary Albert del Rosario earlier Thursday, urging the two to “leave international relations to the one who has the foresight, information, and constitutional mandate to make sound foreign policy decisions.”
But even officials on Duterte’s Cabinet have described Beijing as “intruders” with Chinese ships still present in the West Philippine Sea, according to the National Task Force for the West Philippine Sea.
China has rejected the arbitral ruling that the Philippines won in The Hague in 2016 based on the United Nations Convention on the Law of the Sea, which held that China’s sweeping nine-dash line claim has no legal basis.
President Rodrigo Duterte has asserted that he cannot do anything on the maritime dispute as doing so, he claimed, would mean going to war with China.
“[Duterte] knows that, as a responsible member of the world community, the Philippines must pursue its claims by legal and diplomatic means. We must lay the basis for negotiation, by building a relationship of mutual trust and confidence, and without engaging in name-calling and brinkmanship,” Roque said in his statement.
“He has never renounced our claims and entitlements, and in fact he and his administration have repeatedly and consistently asserted them in bilateral talks with China and in multilateral fora like the United Nations.”
READ: Philippines is ‘the lead in the South China Sea disputes,’ Locsin claims

To recall, Carpio and Del Rosario said that Duterte shelved the ruling and refrained from pressuring China to follow the ruling in order to ease tensions in exchange for economic and medical aid amid the coronavirus pandemic.

Duterte in a public address on Wednesday night also blamed the previous administration and its officials for losing territories in the sea, particularly Del Rosario and Carpio themselves.

Progressive fisherfolk group Pamalakaya earlier Sunday said it had filed three petitions before the United Nations, urging the international body to act on what it said was the continuous Chinese usurpation of the West Philippine Sea.

In a statement issued Sunday morning, the fishers’ federation said that the petitions called on the UN to declare the controversial China Coast Guard Law null and void, calling for the demilitarization of the South China Sea, and look into the impacts of Chinese incursion to the livelihood of Filipino fishers and domestic food security.

Beijing passed the controversial law earlier in January allowing its coast guard to fire at foreign vessels. The Philippines has since filed a diplomatic protest over the law.

“With the increasing aggression and militarization of China in the West Philippine Sea through the passing of Coast Guard Law, we humbly appeal for your intervention by openly denouncing and declaring the law null and void,” one of the petitions addressed to UN Secretary-General António Guterres read.

Pamalakaya also slammed China for its “relentless disregard” of the international tribunal that invalidated Beijing’s sweeping claim over almost the entire South China Sea, which includes 80% of the Philippines’ exclusive economic zone and extended continental shelf.

“Our petitions complement the very principles of the arbitral ruling against China. These include the immediate pullout of Chinese personnel in our territorial waters, respect the rights of our fishers, and demilitarize our traditional fishing grounds,” Fernando Hicap, Pamalakaya national chairperson, said in a statement.

“Moreover, our appeal is in the framework of upholding the basic rights to food and livelihood of our fisherfolk, who are the direct victims, and for the peaceful, diplomatic and non-military resolution to the Chinese aggression and plunder,” the former lawmaker added.

The fishers federation said that they filed the petitions due to lack of concrete and decisive actions from the Duterte government.

“The Filipino fishers are tired of Mr. Duterte compromising our sovereignty in the name of foreign loans and now, vaccines,” Hicap said.