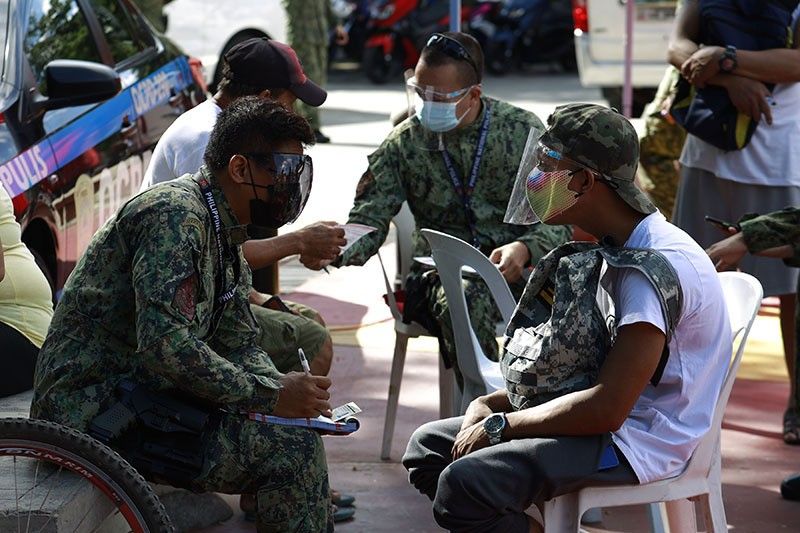 MANILA, Philippines — The Philippine National Police launched on Monday its enhanced complaint referral and monitoring system, which its chief said should guarantee prompt police action to citizens’ complaints and concerns.

Related Stories
‘By the book’: A look at quarantine incidents and police operational procedures
Back to ‘disiplina’? On second day of ECQ, stories of power-tripping enforcers
Days after encounters with police, fear remains for those accosted
Under the system, the public may file reports, complaints, or concerns that need immediate action with the PNP through its official hotlines, social media accounts, and email, with community reports forwarded directly to the PNP chief’s office.
“Every complaint will be treated as urgent. Cops should keep in mind that time is of the essence whenever they get a call or text message from our people,” Eleazar said partially in Filipino, adding that the initiative was among his priority programs when he assumed his post.
“Once they received these concerns, they should immediately act and resolve the complaints. If there were complaints that weren’t acted on before, we can’t have that anymore.”
Reports or concerns that need immediate action can be sent to the official PNP hotlines (0919601752, 09178475757), social media accounts (facebook.com/OfficialPNPhotline), email (e-sumbong@pnp.gov.ph) and web portal (https://e-sumbong.pnp.gov.ph).
The system, which has been designated an office of its own, said that complaints will be reported directly to the district director of the officer concerned. Citizens forwarding any complaints will also be sent auto-replies when updates are available.
The E-Sumbong system will also compile analytics on the volume and location of complaints on erring police officers and will be accessible by station commanders and district directors alike.
As former commander of the Joint Task Force COVID Shield, Eleazar also initiated the creation of a Facebook account for netizens to report violations of quarantine protocols for police response. The Facebook channel has since resulted in arrests of quarantine violators. 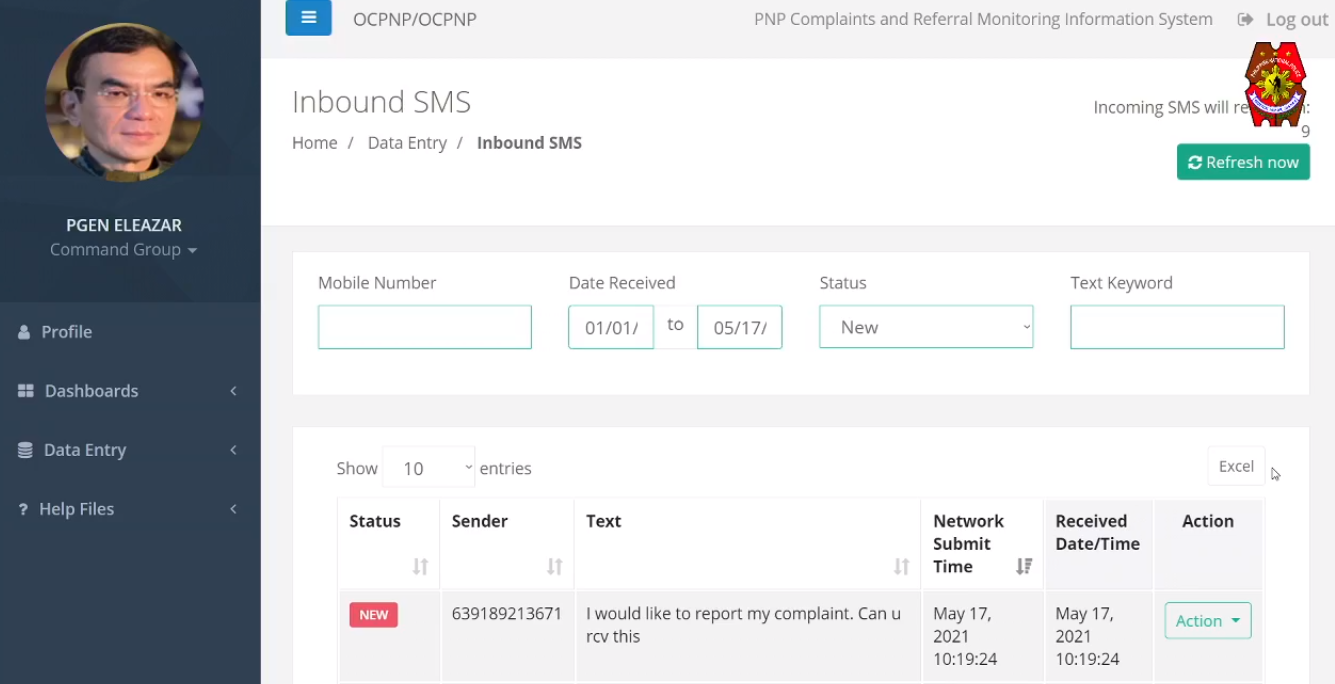 Photo shows the E-Sumbong complaint referral system of the PNP as presented to reporters at a press briefing.
“Before, as long as action was taken, that was okay. But we will analyze the action taken provided by the different police stations if we feel they have complied based on the PNP’s standard operating procedures. If it’s complete and we feel the client is satisfied, only then will we mark the complaint as closed,” Police Lt. Col. Mark Foncardas, project manager of the Complaints and Referral Monitoring Information System, said.
“This is a work in progress, but we envision an improving system that brings us closer to the people,” Eleazar said.
Community trust and confidence
Through the enhanced complaint referral and monitoring system, the police chief said he hopes to regain the community’s trust and confidence in the PNP by showing that its personnel can be fully depended on to serve and protect.
“Its purpose is to strengthen the public’s relationship with our police. If our compatriots see that their complaints are immediately addressed and acted upon, I am sure they will be able to restore their confidence in the entire PNP,” Eleazar said.
“This is my assurance to our people that we will act on your complaints. If cases and complaints are addressed quickly, I am also confident that our communities will be more peaceful and orderly,” he added.
The national police’s reputation has been tarred by cases of aggressive and overzealous enforcement by police that were documented over the coronavirus pandemic. Former police leadership has historically defended police officers involved in viral or high-profile cases of abuse.
Though he has been vocal about his internal cleansing program of the PNP, Eleazar himself has played down a number of concerns involving cops.
When asked about officers intimidating and profiling community pantry organizers, the country’s top cop said at a press briefing last week: “If the public will interpret everything as harassment, then we will always lose.”

2021-05-17
AtinitoAdmin
Share
Previous Emperador raising capex 50% to P1.5B
Next Patient recounts COVID-19 journey with VCO capsules by his side

On 4th anniversary of Marawi liberation, Duterte assures to bring back city’s glory