‘Proof of life’: Scientists claim they found mushroom on Mars 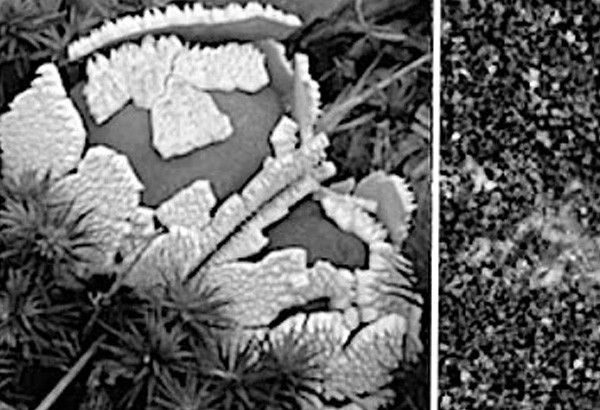 MANILA, Philippines — Scientists claimed that they found evidence of fungi on Mars.

According to a Daily Mail report, microbiologist Dr. Xinli Wei from the Chinese Academy of Sciences, astrophysicist Dr. Rudolph Schild from Harvard-Smithsonian and Dr. Rhawn Gabriel Joseph made the claims after studying images snapped by National Aeronautics and Space Administration's (NASA) Curiosity rover on Mars.

The scientists have been studying NASA Mars images for years and have shared their many discoveries with the world on many occasions.

Last April 2020, Armstrong and Joseph released a similar study on Research Gate that also claimed mushrooms were growing on Mars.

“Throughout its mission at Eagle Crater, Meridiani Planum, the rover Opportunity photographed thousands of mushroom-lichen-like formations with thin stalks and spherical caps, clustered together in colonies attached to and jutting outward from the tops and sides of rocks,” the study read.

“Those on top-sides were often collectively oriented, via their caps and stalks, in a similar upward-angled direction as is typical of photosynthesizing organisms,” it added.

"Claiming that mushrooms are sprouting all over Mars is an extraordinary claim that requires better evidence than an analysis of photographic morphology by a known crank who has claimed, on the basis of the same kind of analysis, that he has seen fields of skulls on Mars," he said.

2021-05-06
AtinitoAdmin
Share
Previous SEAMS Tarot brings the colors of Southeast Asia together
Next Mompreneurs, check this night school by Facebook

Contemplating the emotional side of spaceflight

La Niña’s back. Here’s how it will affect the weather

James Webb: Most powerful space telescope built, will look back at the Dark Ages of the universe

What would make the COP26 climate conference a success?

How to get the most out of a home energy audit

How hot is your ‘hood? New map takes Ottawa’s temperature