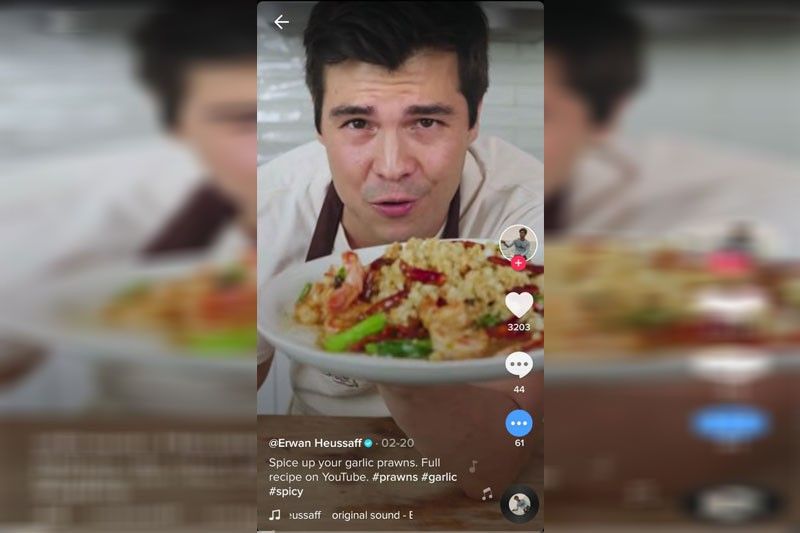 MANILA, Philippines — Erwan Heussaff recently gained "rockstar" status on social media as it was revealed that he donated $2,000 in a community pantry initiative.

The restaurateur and vlogger has also conquered another platform where his culinary skills and expertise has earned him a following.

He's among the must-follow kitchen-savvy stars on TikTok. Apart from him, Marvin Agustin, KC Concepcion and Ninong Ry have also gained fans. Find out what made them stars of TikTok.

He's gone a long way since he became popular through his web site, The Fat Kid Inside. He's put up several restaurants with some friends, and became a first-time father last year to his daughter Dahlia Amelie with actress Anne Curtis.

On TikTok, Erwan is followed for coming up with laudable cooking videos. He breaks down dishes expertly, prepares them masterfully, and presents them beautifully in each video that he shares. He also shares his favorite eats and food discoveries, along with recipes, such as this one for Spicy Garlic Prawns.

He's proven himself as a man with more than two hats. Marvin is primarily known as a TV star but in recent years, he's taken to wearing a toque by formally studying culinary arts and put it into practice by putting up restaurants.

Marvin's charm and easy manner of talking makes him popular on TikTok. Here, he shows followers how to make a delicious and healthy dish, Chopsuey with Tocino.

The formerly active actress has now turned into jewelry-making. When she's not preoccuppied with her precious stones, she's dishing out tips on eating healthy and dishes out mouthwatering photos of wholesome eats.

She was living by herself when lockdown happened, and decided it was time to figure out how to prepare her own meals at home. In this video, she creates her own version of Asian Chicken Curry.

Ryan Morales Reyes, popularly known as Ninong Ry, is a social media celebrity chef, and an internet sensation made famous for his refreshingly light and funny cooking videos.

Ninong Ry, who has enjoyed eating ever since he was a kid, now shares his own kitchen creations on TikTok. This video shows his delicious version of Sizzling Bicol Express.

Calling all Filipino dessert lovers! This new pastry shop is definitely a piece of heaven on Earth

A year in paradise: Multimedia artist stuck in Siargao during the pandemic

Thyroid disorders are becoming prevalent in the Philippines according to a panel of medical experts. …