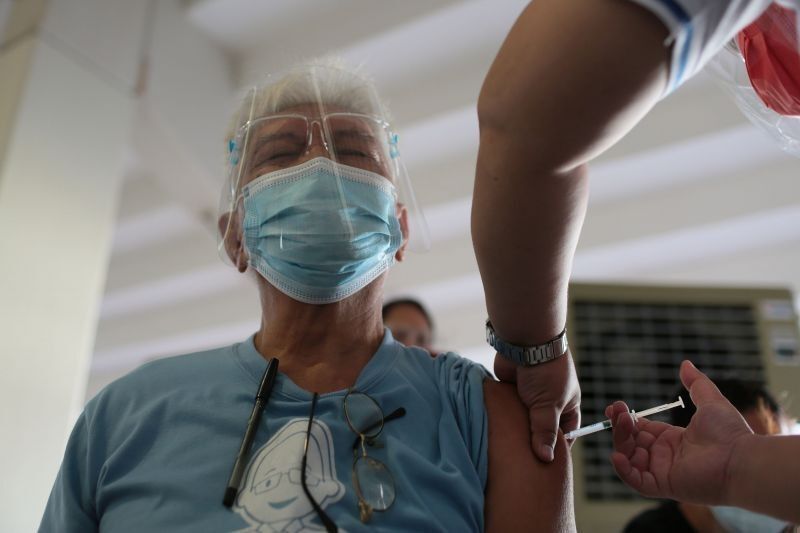 MANILA, Philippines — Health Secretary Francisco Duque III told senators on Tuesday that they will study dropping the use of face shields once a significant number of the population is already vaccinated for COVID-19.

The pandemic task force made face shields mandatory on top of face masks when out in public spaces in December 2020. That policy has since faced calls to discontinue, but health authorites have insisted that it provides additional protection.

Related Stories
Government orders wearing of face shields in public places
DOH: Not yet time to drop face shields
In the Senate’s Committee of the Whole hearing, Duque sought to explain that its use has scientific basis per international studies.
“We’ll be glad to send you the link,” he said in Filipino. “But perhaps we can study groups’ proposals to stop using face shields when our vaccine coverage has improved…for now, we are appealing for the public to continue using it.”
From InterAksyon:Juxtaposed: Philippines’ face shield policy vs other countries without such
Inoculation efforts in the country began in March. By June 13, government figures showed that the number of Filipinos with complete shots was at 1.87 million, far from even a quarter or half of officials’ target of 50 to 70 million this year.
More than 5.06 million have received their first dose, with the number of shots administered nearing seven million.
Senate President Vicente Sotto III, who brought up the question that he described as “nagging” among Filipinos, said officials should do the study right away, and not when vaccinations have progressed further.
“I hope you used the wrong word when you said only when the situation improves,” he said in Filipino. “You should start studying it by now and no longer wait.”
The Senate leader told Duque to send to the chamber a list of countries where face shields are mandatory. In another statement, Sen. Nancy Binay said the names of doctors who recommended it to government should be turned in as well.
Interior Secretary Eduardo Año, who was also in the hearing, said the wearing of face shields carry no penal provision in local governments’ ordinances.
He added that it is only required when riding in mass transportation and entering malls, public markets or other establishments. It essentially leaves out the only time face shields are not mandatory when walking outdoors.
“It has no penalty,” Año said in Filipino. “Even in our reporting, the only ones with penalty provision are on not wearing of masks, violation of social distancing and mass gathering.”

2021-06-15
AtinitoAdmin
Share
Previous Osmeña sees bribery in ERC
Next HOT IN THE CITY! Misters of Filipinas 2021 official candidates in swimwear

How Canada changed its position on pandemic travel bans

No immediate plans to shut border with Canada over omicron variant, U.S. says