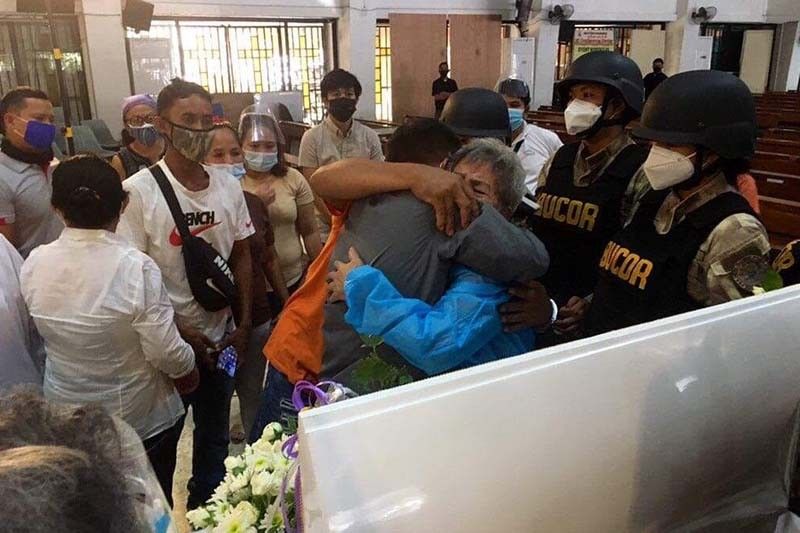 MANILA, Philippines — Morita — the bereaved wife of 75-year-old political prisoner Jesus Alegre and herself also a Person Deprived of Liberty — finally reunited with him on Friday to say her final goodbye.

Justice Secretary Menardo Guevarra confirmed to reporters that he granted the letter request of advocacy group Kapatid to allow Alegre’s imprisoned wife and son to visit his remains.

Related Stories
Group urges release of critically ill political prisoner
Group urges release of ‘at-risk PDLs’ after death of 75-year-old, sick political prisoner
He added the directive has since been issued to the Bureau of Corrections through Undersecretary Deo Marco.
Advocacy group Kapatid described Alegre as a farmer from Barangay Taba-Ao in Sagay town who was arrested on April 14, 2005. He was convicted for murder — a case that the rights group said was made up — and had been in jail for 16 years.
Morita, 74, is detained at the Correctional Institution for Women in Mandaluyong while their son Selman, 47, is at the New Bilibid Prison Maximum Security Compound.
Kapatid in a statement on Friday said Morita and Selman, her relatives and supporters attended a religious service at the IFI National Cathedral.
“This will also be the last time that Morita will see her husband as [Jesus]’s remains will be flown to Negros Occidental where he will be laid to rest,” the group added.
Photos shared by the group showed Morita wearing PPE. BuCor personnel also accompanied them to the church.
Kapatid earlier said Alegre had Chronic Obstructive Pulmonary Disease and diabetes mellitus, a condition that made him more at risk of contracting the coronavirus. He was brought to the Bilibid hospital on June 12.
The group said the elderly prisoner had been vomiting his food and suffering diarrhea, and had since become disoriented and could no longer sit nor stand up without support.
He was brought to a public hospital in Muntinlupa on June 13 where he passed away at 10:30 a.m.
Following Alegre’s death, Kapatid spokesperson Fides Lim called on the government to release PDLs who are vulnerable to the coronavirus inside the country’s overcrowded prisons and jails.
“Alegre is the fifth political prisoner to die in 32 days…His death shows up the terrible state of the highly congested prisons in the country, making the call to release prisoners whose lives are at risk from COVID-19 most exigent,” Lim added. — Kristine Joy Patag with reports from Franco Luna